2016 was a rough year, but with the new year it’s time to try to get back into the family history groove. It’s been so long it’s hard to know where to start, so I’ll start with some small, fun discoveries. Rather than documenting my exploration of multiple related research avenues in these first posts, I’ll just focus on the discovery itself, and I’ll include just a small amount of related research.

One of these small, fun discoveries was finding my great-grandfather Charles Austin Prettyman (or C.A. Prettyman to his friends) mentioned in a nationally syndicated humor column.

A Cincinnati humor columnist apparently found C.A. Prettyman’s name amusing and mentioned C. A. in his column in the Wednesday, May 16, 1917, edition of The Enquirer. The column was called Bits of Byplay and it was written by James S. Hastings, using the nom de plume of “Luke McLuke”.

The portion of the column that was about C.A. Prettyman was only five lines long:

There are not many handsome men in the average town. But what we started to say was than you can always C. A. Prettyman in Wadena, Minn. He runs the barber shop.

The entire column from May 16, 1917, is shown below, with the C. A. Prettyman blurb highlighted.

I wondered how a Cincinnati columnist came to learn of a Wadena barbershop proprietor, so I kept digging.

According to the columnist’s obituary, “people whom he had never seen sent him in ‘monikers’ that were strange and curious  and ‘Luke’ put the finishing touches on them.” So it is entirely possible that Hastings never met C.A., but only corresponded with him or with someone who knew or heard of him.

However, I found another mention of C.A. Prettyman by Luke McLuke in the November 26, 1915, edition of his column, as it was published in the Lompoc Journal:

So James Hastings (aka Luke McLuke) apparently knew, knew of, or corresponded with C.A. Prettyman for at least 18 months before he wrote the “you can always C. A. Prettyman in Wadena” joke I originally found.

Learning to be soldiers? 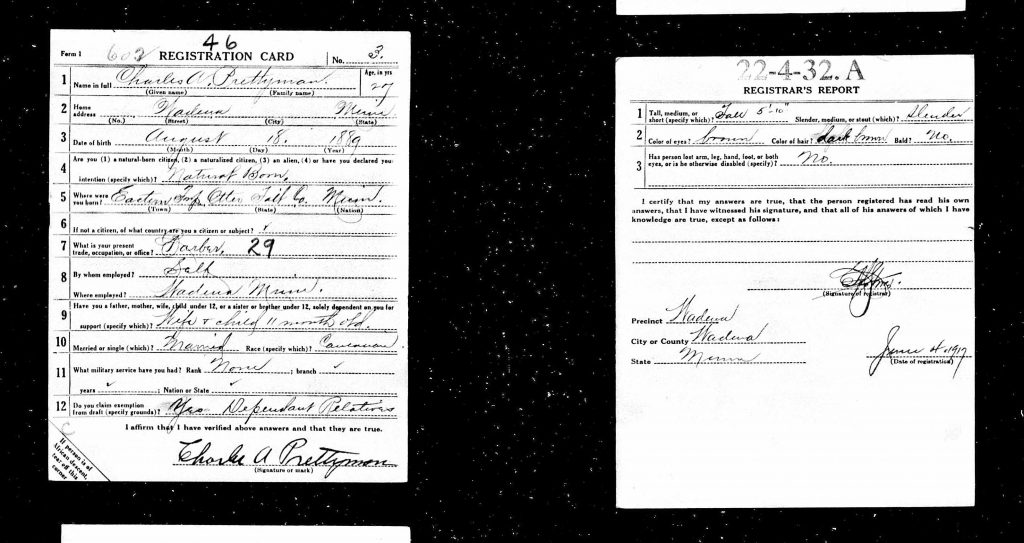 I double-checked to make sure I hadn’t missed a WWI military service record for C.A. Prettyman and I found nothing. So where and what was Plattsburg?

There appear to be two candidates for the Plattsburg mentioned my Luke McLuke:

Plattsburg, MO, was about 500 miles south of Wadena, MN (where he married Rose Gores in June, 1915), and from what I can tell, the Missouri Plattsburg had no military significance in 1915. Plattsburgh, NY, was about 1100 straight-line miles east of Wadena, across the Great Lakes and through Canada, or about 1300 miles if one was to stay in the U.S. and skirt the Great Lakes via Chicago and Cleveland. Unlike the Missouri Plattsburg, the New York Plattsburgh played an important role in U.S. military history.

The Preparedness Movement founded its first and most famous training camp in Plattsburgh, NY, in 1915, the same year that Luke McLuke said C.A. Prettyman was learning to be a soldier there.

After the outbreak of World War I, Democratic president Woodrow Wilson believed the U.S. should remain an armed but neutral power. Former Republican president Theodore Roosevelt and former Army Chief of Staff General Leonard Wood disagreed with President Wilson and felt that the U.S. needed to increase the military readiness of the U.S. because they thought eventual involvement in World War I was inevitable.

The idea behind the Plattsburgh camp and the Preparedness Movement was to offer civilians the chance to become familiar with military equipment, techniques, and training, without obligating them to military service. This way, when the inevitable day came when we’d have to bolster the military, we’d have a head start on growing our military and would have a trained group of men who could serve as a pool for military officer candidates (in fact, the modern ROTC traces its roots to the “Plattsburg Idea”).

The sinking of the Lusitania by a German U-boat on May 7, 1915, started to turn President Wilson’s attitude closer to that of the Preparedness Movement and may have given added impetus for C. A. Prettyman to go to Plattsburg.

Some propaganda for Plattsburg is shown below. The first poster is from 1915, and may have influenced C. A., while the magazine cover is from Summer, 1916, several months after C. A. spent time at the camp: 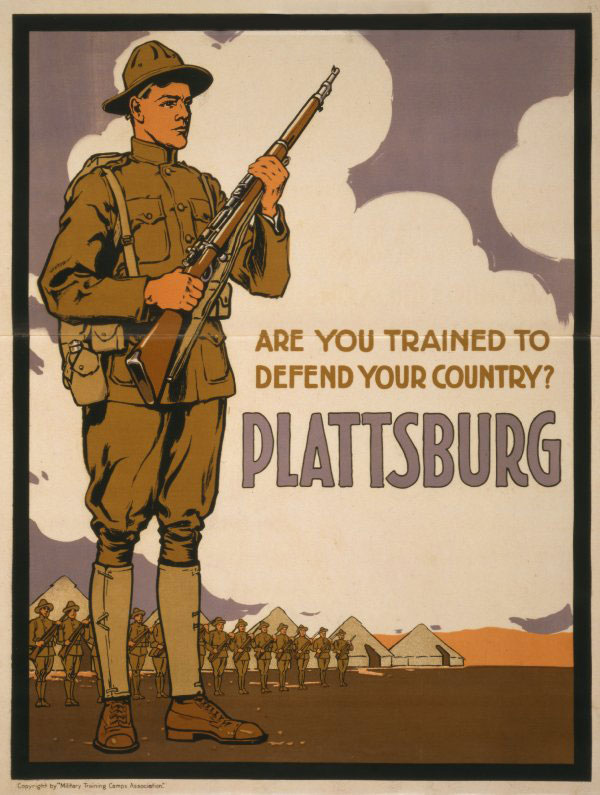 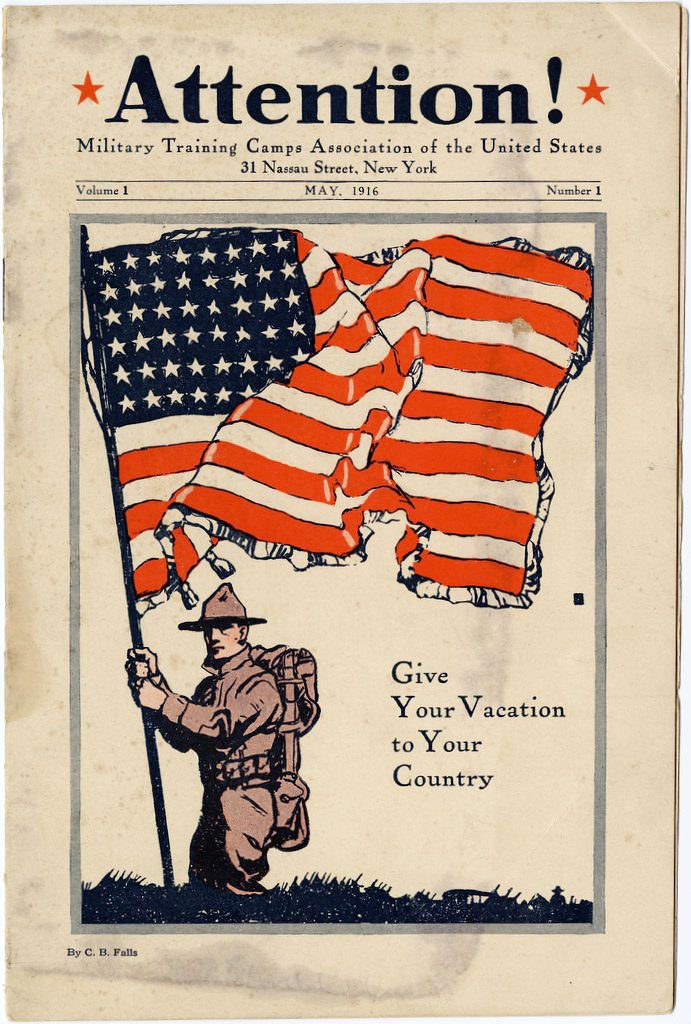 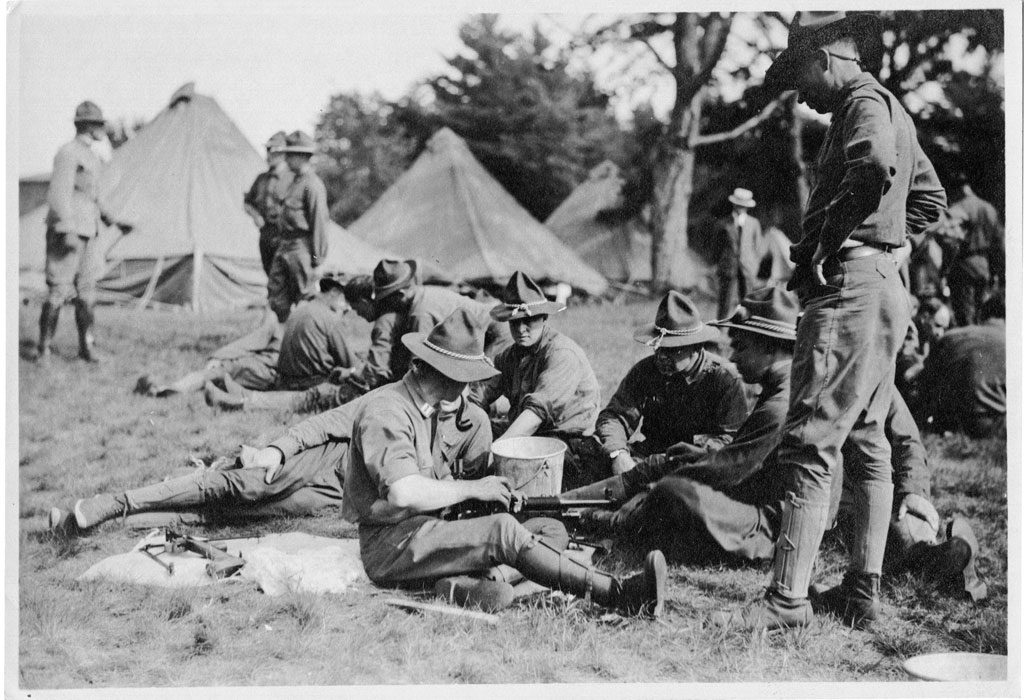 The Plattsburg camp was known as “Business Man’s Camp”, and according to the Greenwich Historical Society, “this summer school for civilians offered officer training and physical fitness workouts.”

I’d love to find a copy of the 1915 yearbook for Plattsburg (see parts of the 1917 yearbook here). If you know of a copy, please let me know!