In these days of intense partisan bickering over immigrants, I thought it might be time to look into the stories of my own immigrant ancestors.

This is a list I’ve been meaning to compile for some time. It is a work in progress that should be growing substantially over the next few weeks.

The names in bold face are those of my direct ancestors. My earliest ancestor to what would become the United States was Henry Bagwell from England, who in 1609 tried to sail to Jamestown, Virginia, only to find himself shipwrecked for nine months on the then-deserted island of Bermuda. My most recent ancestors to the United States immigrated in 1893 from Holland: Cornelis Edel, his wife Anna Kant (van den Heuvel) Edel, seven of their children, and his brother-in-law Johannes Christian van den Heuvel.

My ancestors were almost all in just the first and second waves, with only two families coming to the U.S. at the very beginning of the third wave.

1620—September 6 to November 9 aboard the Mayflower

A 48-year-old William Mullins, his 46-year-old wife Alice Mary (Atwood) Mullins, their 14-year-old son Joseph Mullins, their 18-year-old daughter Priscilla Mullins, and a teenaged servant or apprentice named Robert Carter sailed on the Mayflower from September 6–November 9, 1620. The Mullins family was from Dorking, county Surrey, England (about 21 miles south of London) and they were part of a group of religious separatists seeking to build a new society in the New World. William had been a successful shoemaker and he made one of the larger investments in the Merchant Adventurers group, which bankrolled the Mayflower voyage.

A 21-year-old John Alden from Harwich, Essex, came aboard the Mayflower at Plymouth. He was from the same town as the captain of the Mayflower (Master Christopher Jones) and may have known Master Jones prior to joining the crew of the Mayflower. John was both a crewman and the ship’s cooper (barrel-maker) who was charged with the task of maintaining the ship’s barrels, which held the ship’s food and fresh water stores. Once in the New World, he was given the choice of remaining in the colony or returning to England. He chose to remain.

It is not known whether John Alden interacted with the Mullins family aboard the Mayflower or during that first winter, but at some point they courted and decided to marry. On May 12, 1622, John Alden and Priscilla Mullins were married in Plymouth.

These two immigrants went on to live long and healthy lives in the New World, and had 10 children together.

A 51-year-old Henry Wolcott, his 45-year-old wife Elizabeth (Saunders) Wolcott, their 15-year-old son Christopher Wolcott, their 20-year-old son Henry Wolcott, and their 12-year-old son George Wolcott sailed from Plymouth, England, to Nantasket Point, Massachusetts, aboard the Mary and John. Their eldest son, 23-year-old John Wolcott remained in England his entire life, and their three youngest children—10-year-old Anna Wolcott, 8-year-old Mary Wolcott, and 5-year-old son Simon Wolcott—remained in England at first and then joined their family a few years later. Henry and his reunited family settled in Windsor, Connecticut, in 1636. Henry the elder served as a member of the first legislature of Connecticut. He served as a member of the Connecticut House of Delegates from 1637 to 1643, and then was a member of the House of Magistrates from 1643 until his death in 1655. Henry died on May 30, 1655, and his wife Elizabeth died on July 17, 1655. They are buried together in a single tomb in the churchyard of the First Congregational Church in Windsor, Connecticut.

Henry and his family came to America in search of religious freedom. Henry had been converted to Puritan thinking under the teachings of the Reverend John Elton. Parliament, before it was dismissed by King Charles I, had a Puritan majority, but King Charles wanted to see the Puritans either conform to the Church of England or leave England.

1634—Spring to Summer aboard the James of London

1635—March to May aboard the Suzan and Ellen

A 45-year-old John Bailey Sr. and his 22-year-old son John Bailey Jr., both weavers by trade, left their homes in Chippenham parish, county Wiltshire, England, to travel to the New World. John Sr.’s 20-year-old daughter Joanne Bailey either came with them or followed them shortly thereafter. John Sr.’s wife (and John Jr. and Joanne’s mother) Eleanor (Knight) Bailey was afraid of the sea and refused to travel with them. John Sr. tried to convince his wife to come by granting to her and the children land in their own right, but he was unsuccessful. He was never to see her or his other children again.

The Angel Gabriel was unusual for a passenger ship. It was a 240-ton barque and it was armed with 16 cannon. The Angel Gabriel had originally been commissioned by Sir Walter Raleigh and had been outfitted for combat with the Spanish. In fact, in the summer of 1596, the Angel Gabriel simultaneously fought three Spanish galleons in a sea battle in the Bay of Cádiz. Despite great odds, the Angel Gabriel won that battle, losing three Englishmen to the Spanish ships’ 500 men. A ballad was written to honor the occasion:

After twelve weeks at sea, the Angel Gabriel spotted land on August 14, 1635. They sailed to Pemaquid (very near to modern Bristol, Maine), where there was already a settlement, and began ferrying passengers to the shore that evening and night. That night (the night of August of August 14/15, 1635), they were taken by surprise by a severe hurricane that later became known as “The Great Colonial Hurricane,” now believed to have been the most intense hurricane to hit New England since European colonization (see the National Hurricane Center’s 2006 reanalysis here).

The storm blew over trees on the land and created storm surges that are estimated to have been over 20 feet that washed whole villages of Native Americans out to sea. The storm broke off the masts on the ship and broke its anchor cables. Some of the crew remained onboard to fight the storm, but the storm got the better of the Angel Gabriel and she and her crew sank and were never seen again. Her wreck site has never been found.

The Baileys found their way to Newbury and joined the settlement at Parker River. They stayed in Newbury for only two years, and then in 1637 they went further into the wilderness and built a log cabin on the far side of the Merrimack near the mouth of the Pawaw River. The ruins of an old cellar on what is known as Bailey’s Hill could still be seen a century ago.

John Sr. moved to Newbury, Massachusetts, in 1650. The Colony was going to expel him because his wife would not accompany him to his new home, but he spoiled that plan by dying in 1651.

1635—unknown dates on an unknown ship

More of the story to come.

A 34-year-old John Gedney (1603–1688), a worsted weaver from Norwich, England, sailed from Yarmouth, England in May 1637. He took the examination to pass to New England on May 11, 1637, and then sailed to Boston, Massachusetts, aboard the Mary and Ann, with his wife, three children, and two servants, arriving in summer 1637. He sailed with his 25-year-old wife Mary (Bartholomew) Gedney (1612–1639). Immediately after arriving, they settled in Salem, Massachusetts.

1637—unknown dates on an unknown ship

1637—unknown dates on an unknown ship

More of the story to come.

John Gedney was a 34-year-old worsted weaver from Norwich, England. Along with his 25-year-old wife Sarah Mary (Bartholomew) Gedney, and their children Lediah, Hannah, and John, and servants William Walker and ___ Burges, aged 26 years, passed the examination on May 11, 1637, to go to Salem, New England. After the voyage, John became an innkeeper and vintner once he settled in Salem. John lived for 50 years in New England, dying on August 5, 1688.

My most recent ancestors to the United States immigrated in 1893 from Holland: Cornelis Edel, his wife Anna Kant (van den Heuvel) Edel, seven of their children, and his brother-in-law Johannes Christian van den Heuvel.

Cornelis was 41 years old when he immigrated with his family. He had had been married once before—his first wife Reinoutje (Knibbe) Edel died in 1886 at the age of 32 after she and Cornelis had had six children together. Four of these children—Antje “Anna” Edel (17 years old), Cornelis Edel (14 years old), Engel Edel (13 years old), and Paternella “Nellie” Edel (10 years old)—accompanied their father, his new wife, and their half-siblings to the New World. Cornelis’ and Reinoutje’s eldest and youngest children (20-year-old Neeltje Edel and 9-year-old Grietje “Grace” Edel) remained in Holland with family.

Also with them on their trip to the United States was Anna’s 21-year-old brother, Johannes Christian “Joe Chris” van den Heuvel.

Although they were traveling from Haarlemmermeer, Holland, to Pella, Iowa, their transatlantic voyage began in Liverpool, England, on July 20, 1893, and ended in Québec City, Canada, on July 30, 1893. They made this voyage in just 10 days—amazingly fast compared to the weeks or months that the voyage took earlier ancestors in the 1600s. I do not yet know how they got from Haarlemmermeer to Liverpool, or from Quebec (presumably Québec City) to Pella, Iowa. Presumably they took a ship from Amsterdam to Liverpool, then boarded the Laurentian for Quebec, then travelled up the St. Lawrence River to the Great Lakes, probably landing at either Chicago, Milwaukee, or Duluth and traveling overland to central Iowa.

Below is a family photo of Cornelis’ and Anna’s family, around 1910, after they had been in the US for nearly two decades. My great-grandmother Catalena Edel (back right) was their first child born in the U.S. 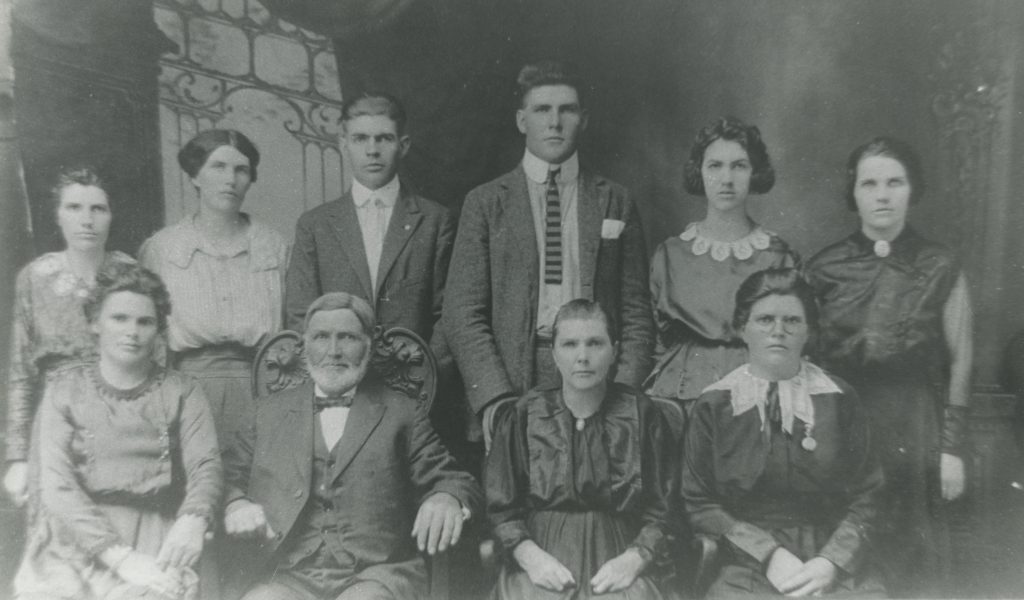