In the Spring of 1901, Joseph Askew and his wife Jane leased a three-story brick hotel called the Wadena Hotel. They soon renamed the hotel the Commercial Hotel, as their target customers were travelling salesmen who came by train and needed a place to eat, sleep, and display their goods. After a time, Joseph purchased the Hotel for an estimated $10,000 (the equivalent of about $275,000 in today’s dollars). 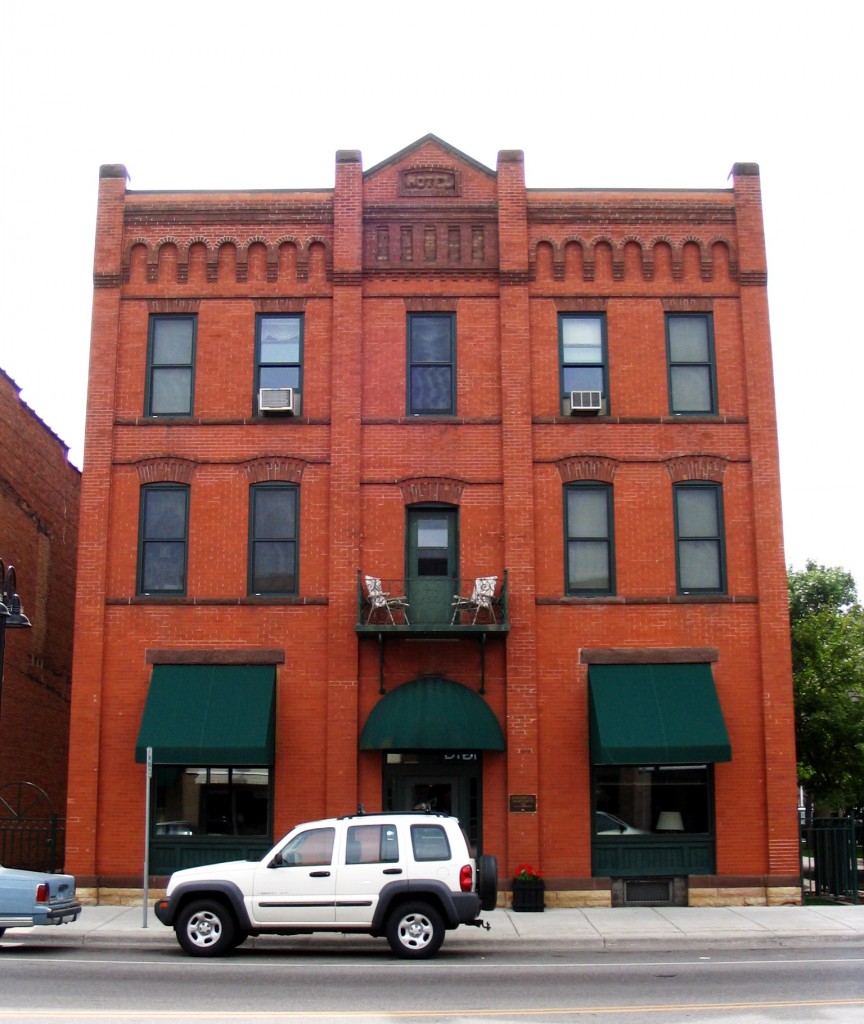 Joseph Askew and his wife and their children managed and later owned the Commercial Hotel in Wadena, MN, for much of the first decade of the 1900s. By 1908, Joseph decided to sell the hotel and move his family to North Dakota to farm. In the meantime, the hotel was leased to Frank Lynch in 1908, then to J. A. Schreiner in 1909, and in 1910 the hotel was leased (or possibly purchased) by the Askew’s youngest daughter, Jennie, and her husband, Albert Barker.

After Joseph’s death September 21, 1911, Jane made the decision to sell the farm, move back to Wadena, and buy back the Commercial Hotel. Jane’s son Wilfred contributed $5,000 he had from selling off his mining interest in Colorado, and this, combined with other family money was enough to buy back the Commercial Hotel. Possibly in recognition of the fact that the hotel was bought back and then operated cooperatively by the members of the Askew family, in 1912, Jane Askew formed the Askew Realty Company and distributed shares of the company among the members of the family. 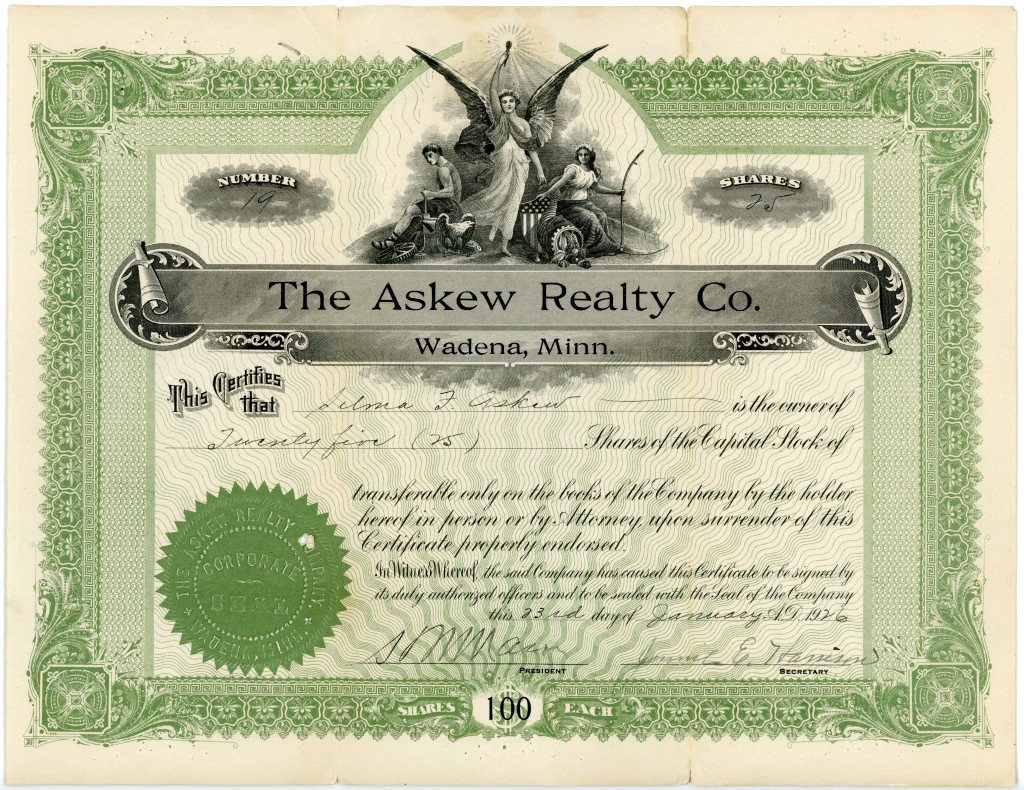 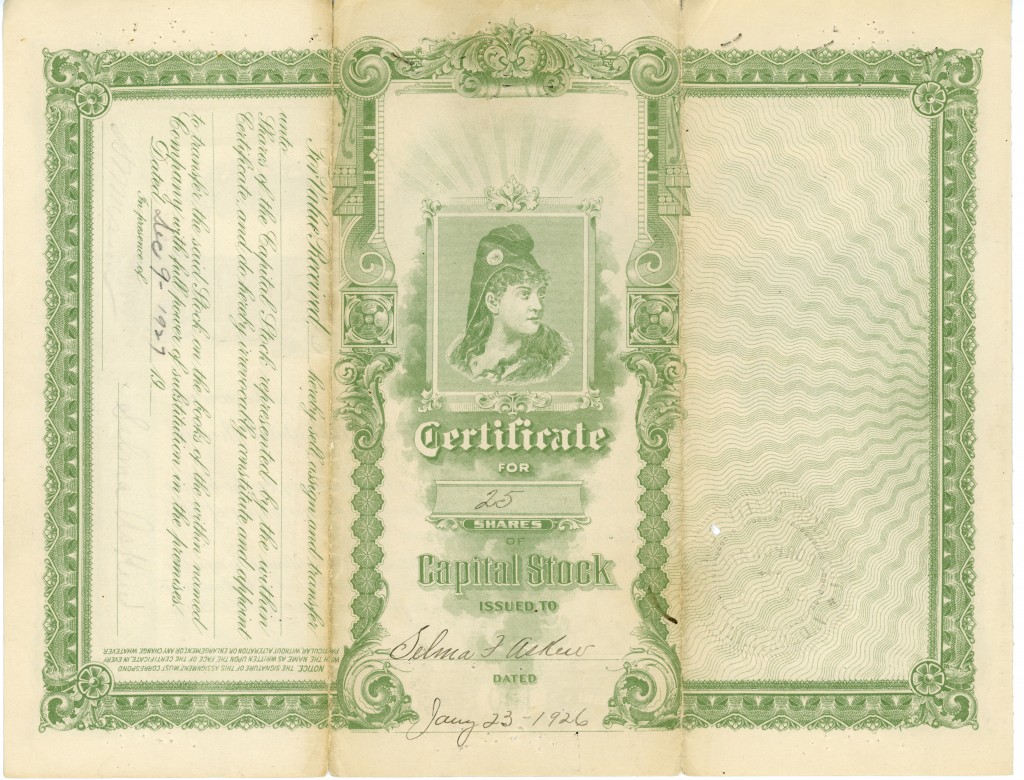 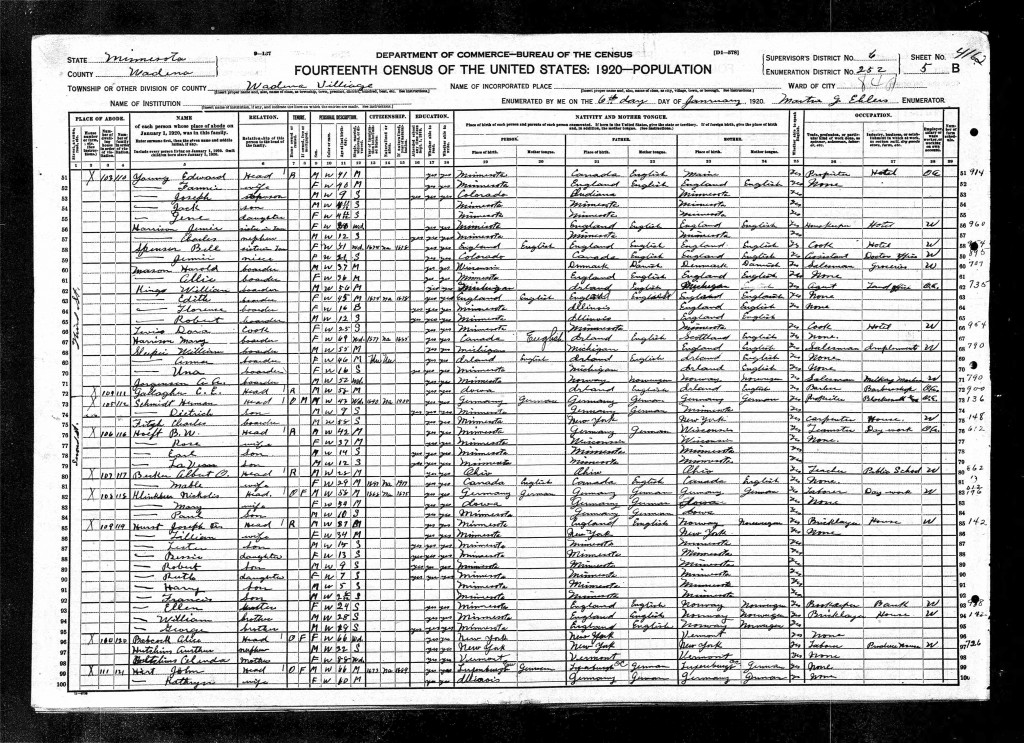 The Askews enumerated at the Commercial Hotel on the 1920 census:

Only two Askew daughters were missing from the Commercial Hotel in 1920: Annie and Etta. Annie and her husband Billie were busy running their own hotel, the Askew’s first hotel—the Arlington Hotel in nearby Menahga. Etta and her husband Charles Wilkins were farming in Cass County, ND.

By 1930, the impact of the automobile on the hotel trade was being felt (or perhaps the census taker came by during an ebb in business). The 1930 census lists only 12 people in the Commercial Hotel, 6 of which were Askew family members, and 4 were non-Askew maids/waitresses, leaving only 2 travelling salesman as paying guests. 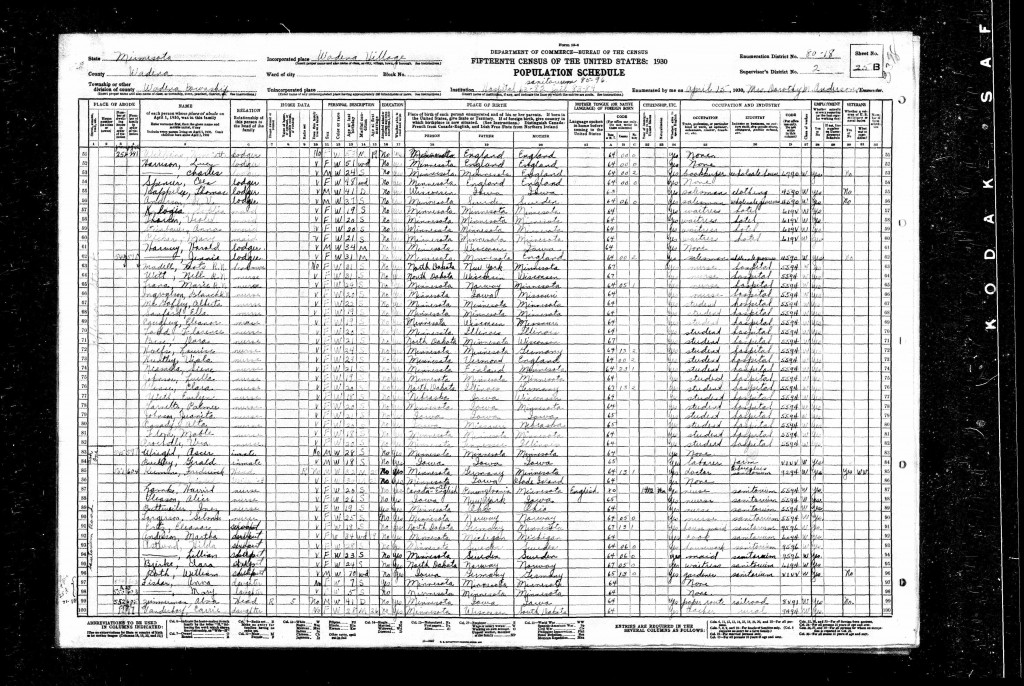 The Askews enumerated at the Commercial Hotel on the 1930 census:

The 1940 census shows the Askew clan still running and living at the Commercial Hotel. 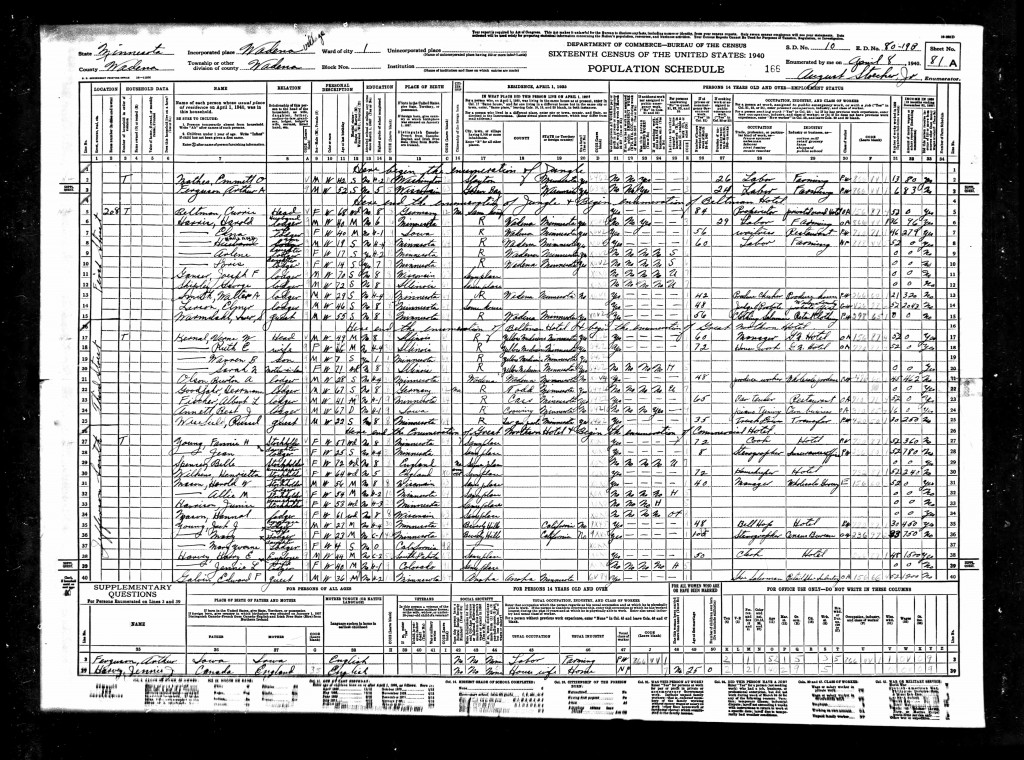 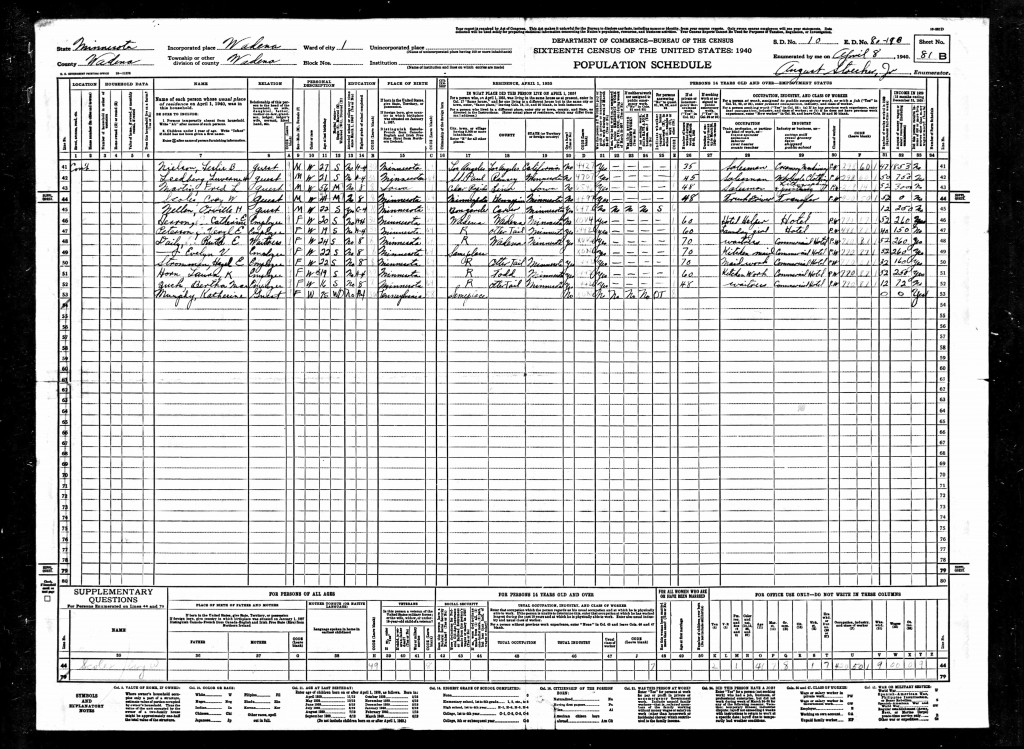 The Askews enumerated at the Commercial Hotel on the 1940 census:

They also had 14 guests recorded as staying in the Hotel at the time of the 1940 census, including a 75-year-old widow named Katherine Murphy who is marked as being a guest, but is recorded as having lived in the same place (the Commercial Hotel) in 1935. Perhaps this is the mysterious “Mother Murphy” I’ve heard about in relation to the Commercial Hotel? Below is a photo of “Mother Murphy” and Fannie (Askew) Young:

Seven daughters of Mr. and Mrs. Joseph Askew collaborated to make the Commercial Hotel a hospitable home for the weary traveller and its piping hot steaks became a byword particularly with the traveling salesmen who swarmed over the state in their pursuit of making a livlihood. Trains were practically their only mode of travel, train schedules, more often than not, made connections that entailed rather long layovers. Wadena as the hub with its Northern Pacific and Great Northern railroads thus became a focal point of transfers and the layovers thus put the hotels in a position to reap the financial whirlwind.

The dominating spirit of their mother decreed hard work and her dictum that nothing but the best be served was quickly assimilated by the daughters and their record of performance was little short of miraculous in the annals of hotel history. Service included a spirit of good fellowship and the lonely traveller was quickly made to feel at home.

The Askew sisters worked as a unit, imbued with the spirit of one for all and all for one, a spirit which was to engulf the entire Askew tribe including relatives. The hotel became, in a sense, a home for them all, now still the home of Jennie Harvey, daughter of Belle Askew, and one of three survivors of the original family residing here. She has for some time managed the Commercial but is not in the best of health. Bob King and John Askew are still here.

Social activities of the sisters was considerably limited by their close attention to their duties at the hotel but they were staunch affiliates of the Episcopal church even though their attendance and participation in its activities were largely represented by Harold and Alice Mason, the former for many years acting as head of the clan and hotel manager. Lurking underneath a somewhat stern approach to the duties of daily life was a charitable side of the Askew characters, unheralded for the most part, in which they contributed liberally to the community well being when their judgment suggested the cause worthy.

To close, here are a few photos of the Askew women posing next to the Commercial Hotel: 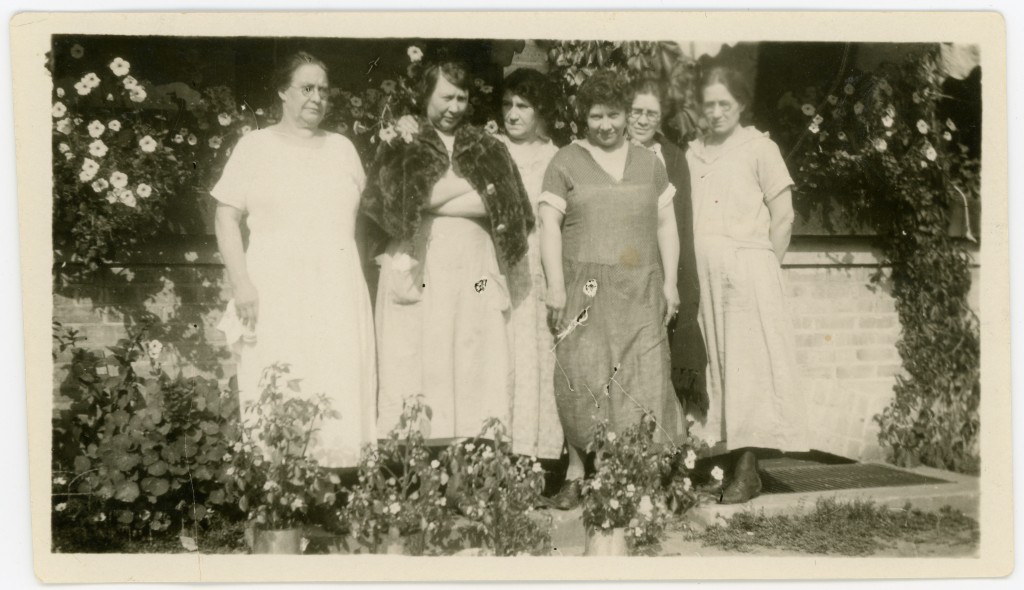 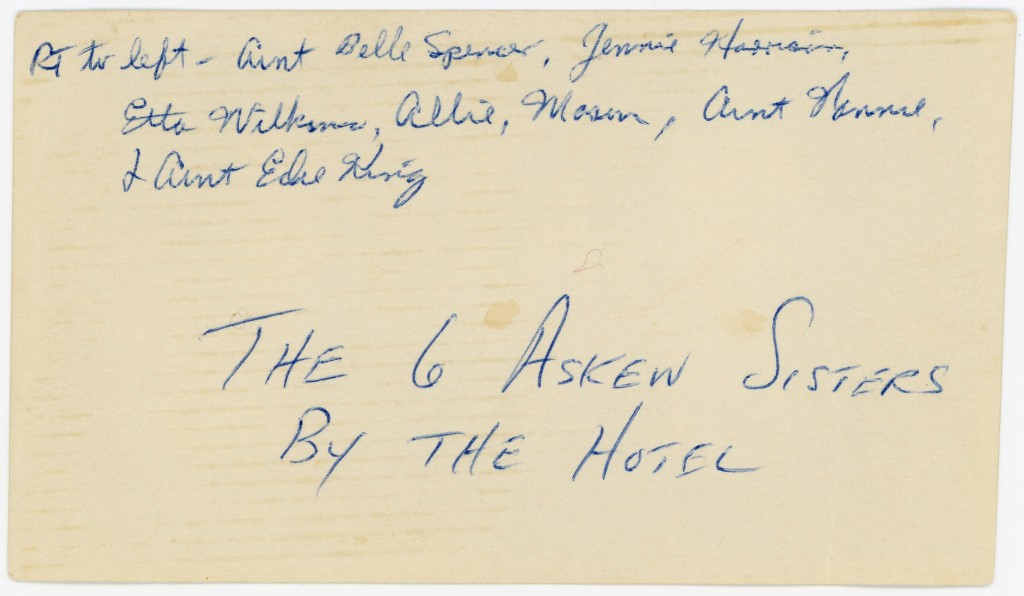 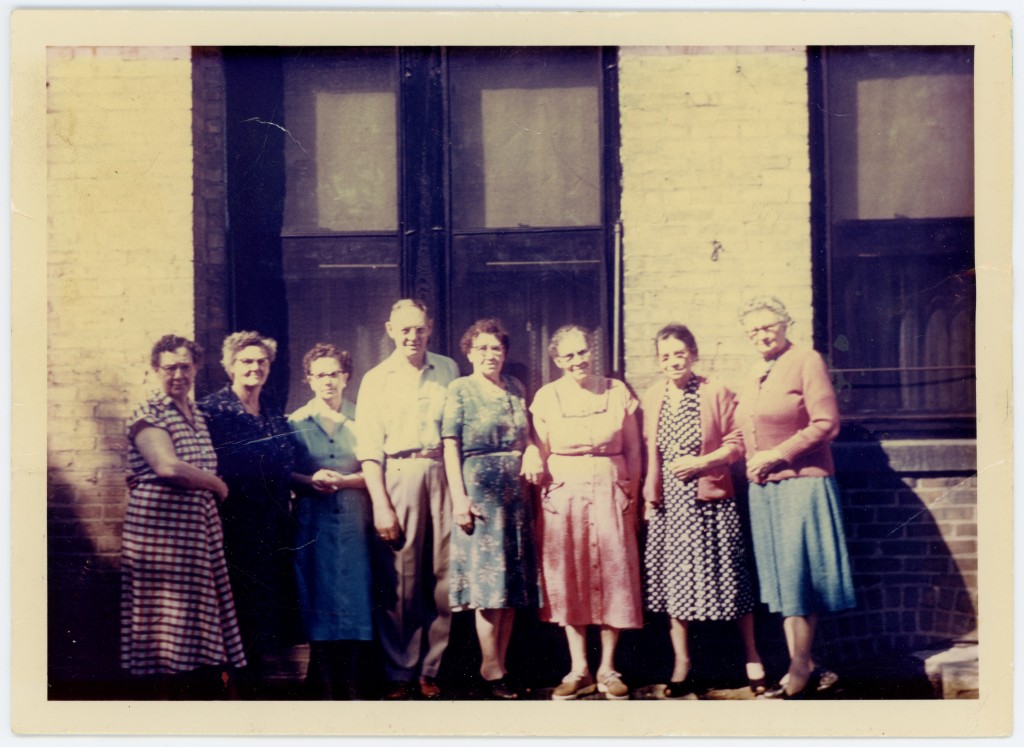 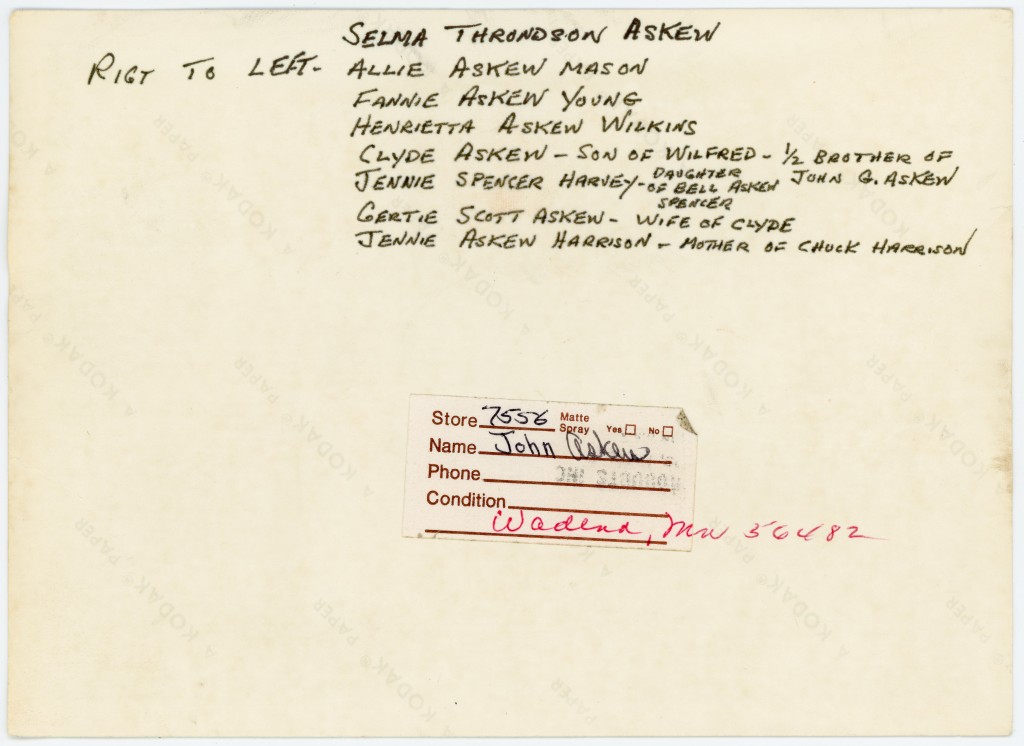 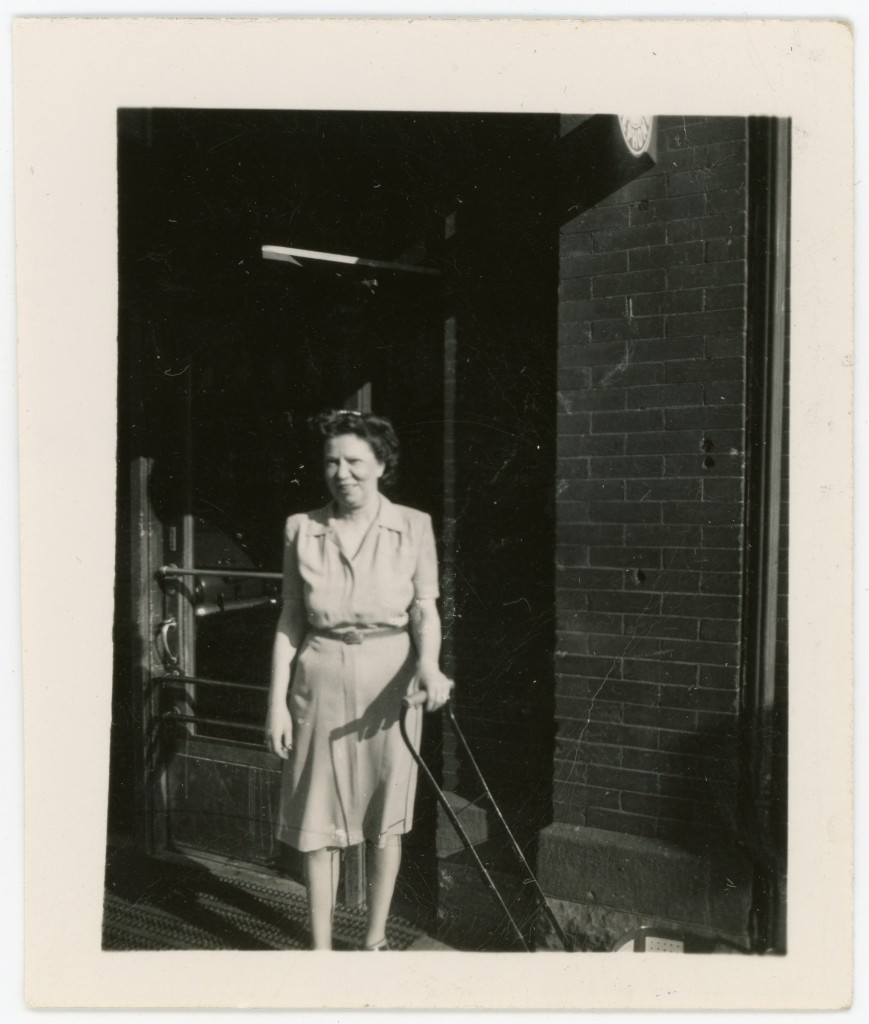 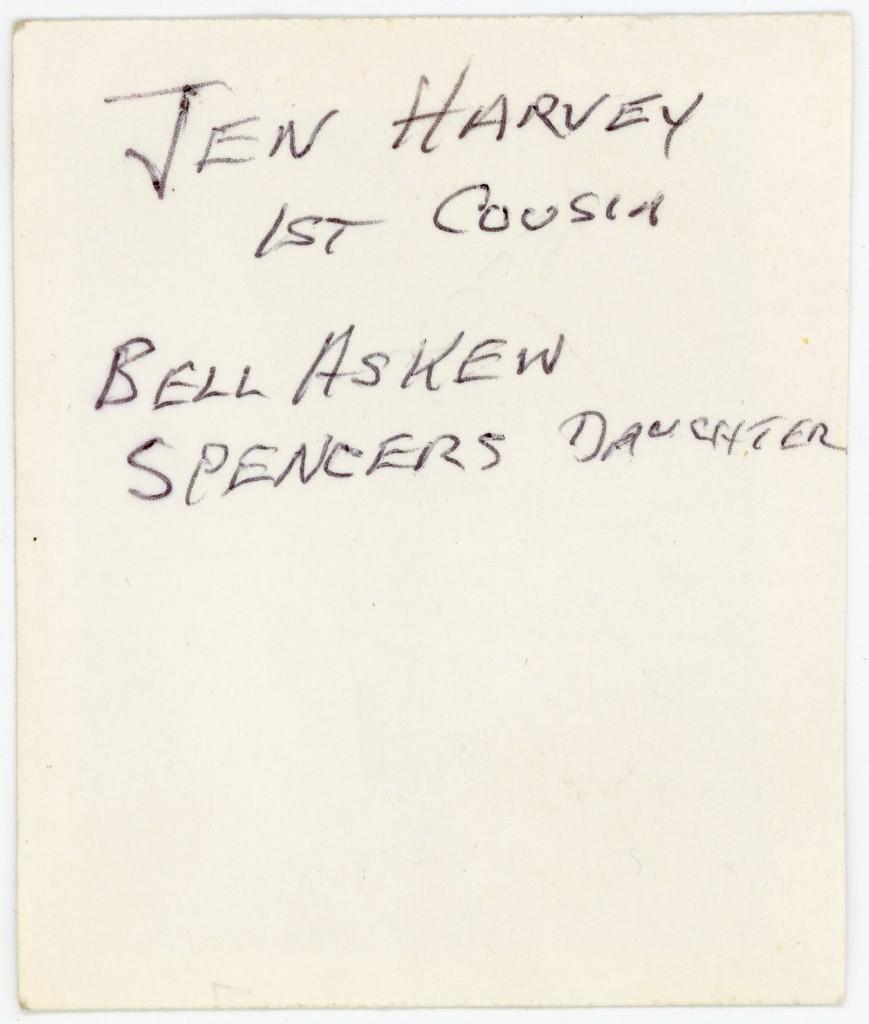 Please leave comments below if you have any more information about the Askews’ relationship with the Commercial Hotel.

5 thoughts on “The Askew women at the Commercial Hotel”