I introduced the Prettyman barbershop in yesterday’s last post. The four Prettyman brothers—Roy, Irvin, Charles, and Clarence—appear to have worked in and managed a barbershop in Wadena, Minnesota, from the 1910s through at least the early 1920s. Yesterday I presented what I thought were the only two photos I had of the barbershop, asking my readers to help me identify the men in the photographs and to discover what other details could be learned about the barbershop, including its location.

Since that post, I’ve discovered that I actually have a scan of another photo of the barbershop, plus scans of the back of these photos, which contain helpful information recorded by the Wadena Area Historical Society. As a result, I now know where the barbershop was located—110 Jefferson Street South in Wadena.

Here are the three photos I’ve now found of the Prettyman barbershop. The two from the Wadena Area Historical Society have information on their back sides; the original photo I’ve got is blank on the back. Here’s the photo I’ve got: 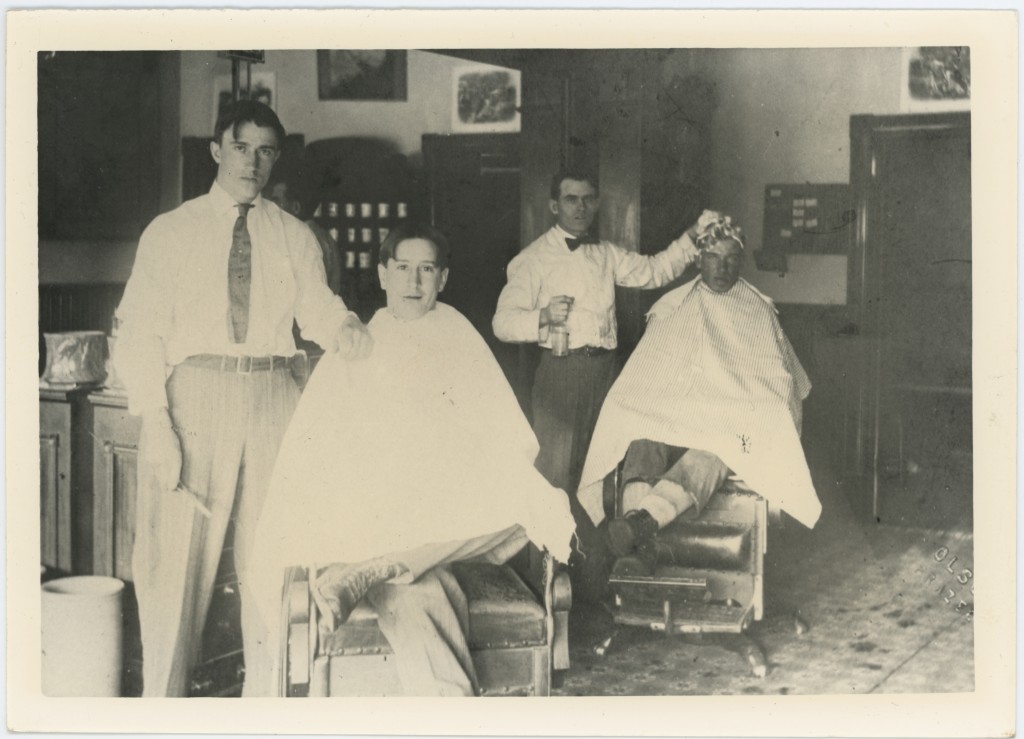 Here’s the second photo (as I mentioned yesterday, it was unfortunately mistakenly cropped during scanning): 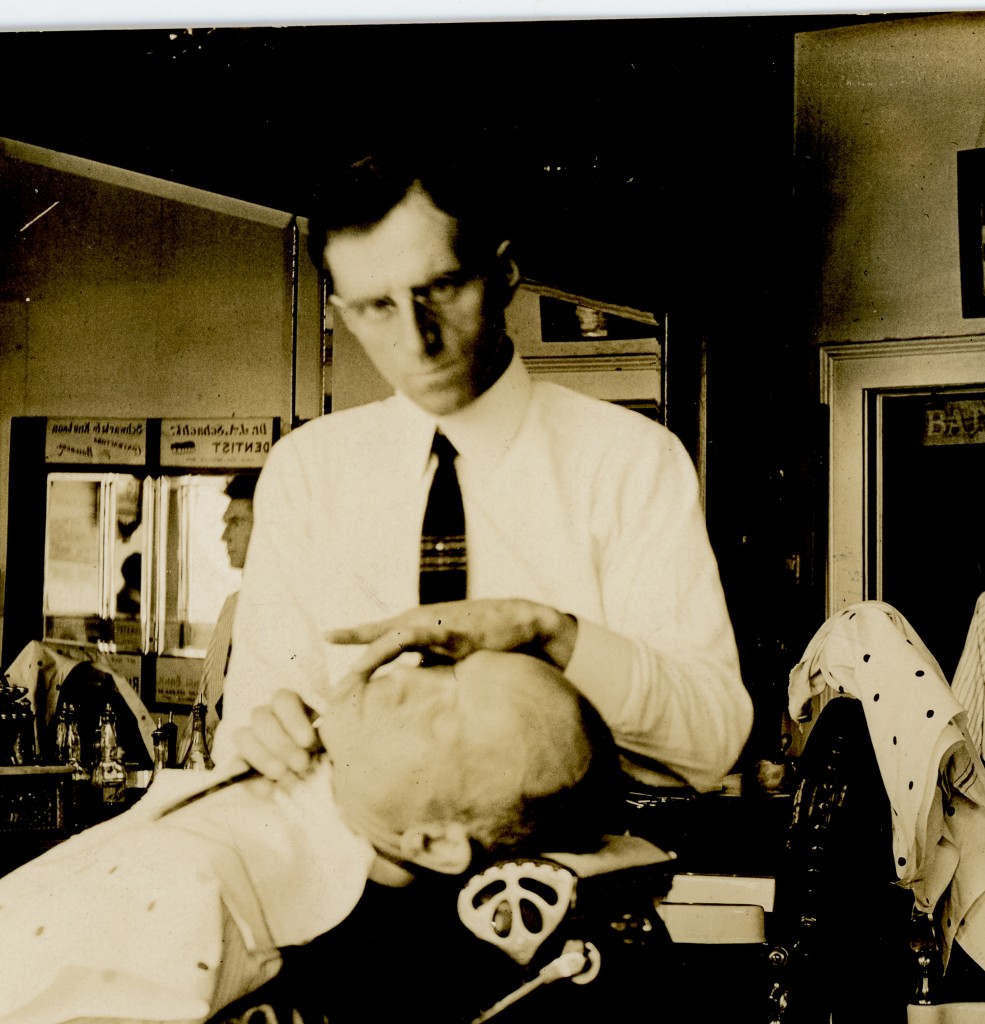 The back of this photo is shown below, tentatively identifying the man as C.A. Prettyman and giving the address of the barbershop as 110 Jefferson Street South in Wadena: 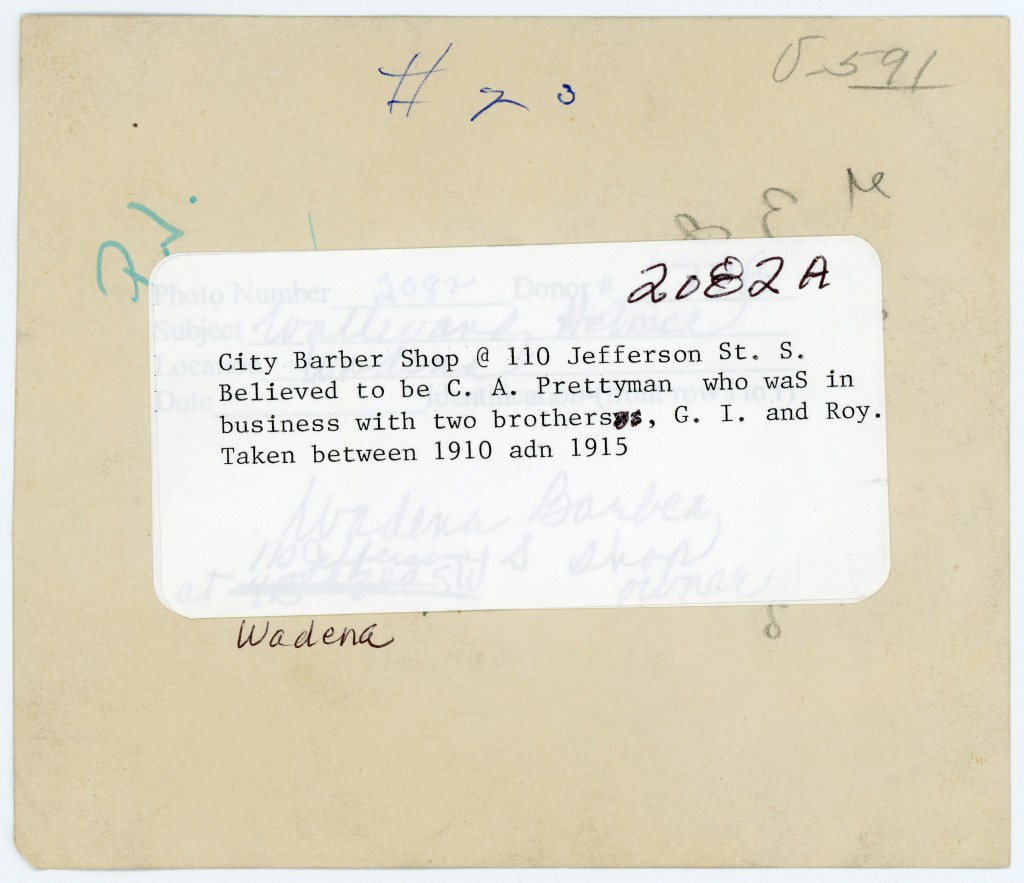 And here’s the new photo I found among my scans from last November’s trip to Wadena: 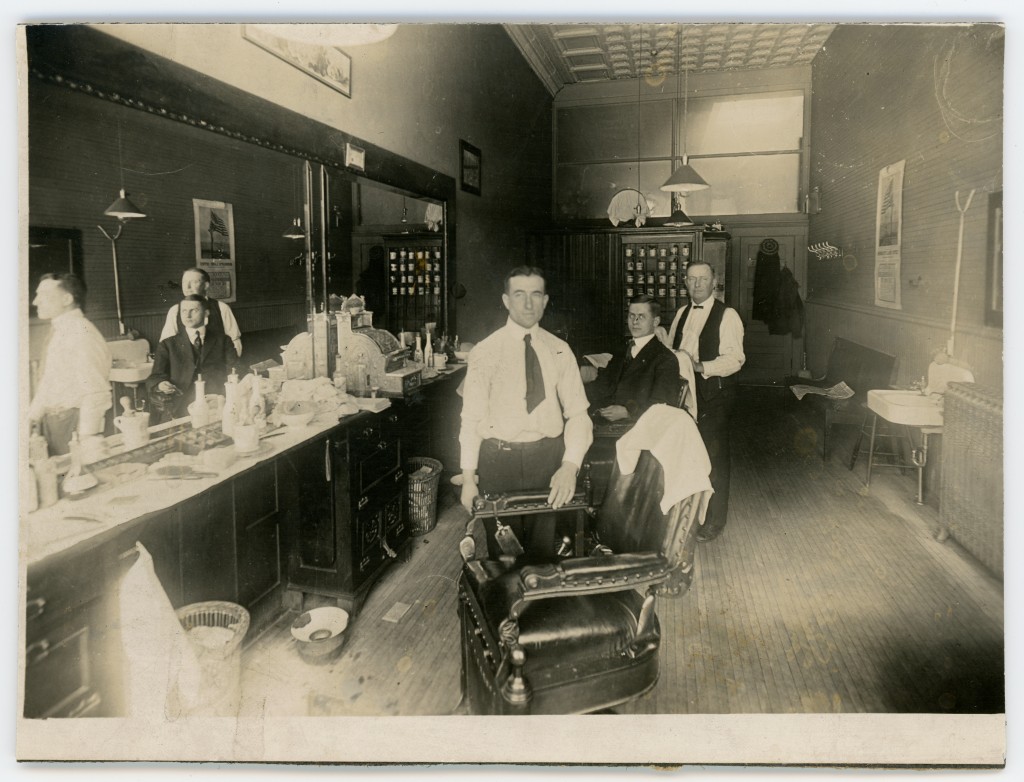 And the back of this photo, confirming the address of the barbershop: 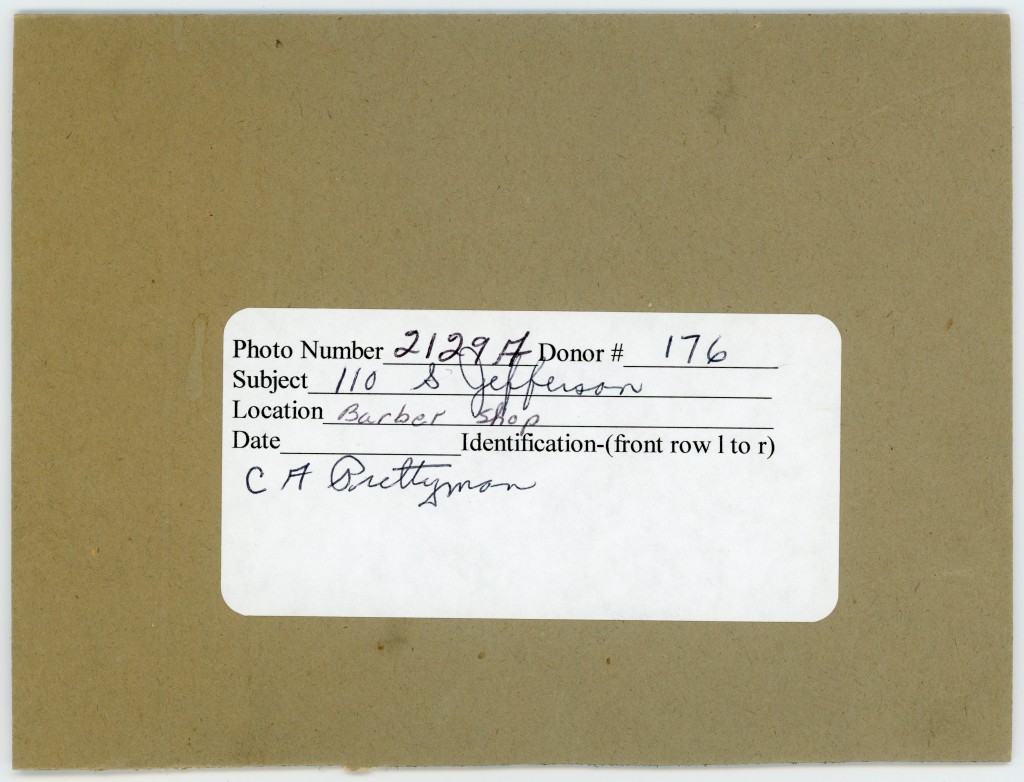 It’s really too bad that this last photo wasn’t better focused, as it’s got all sorts of information in it that’s almost readable. For instance, this poster on the side wall appears to be a calendar, although it’s difficult to make out much:

Thankfully, the reflection of the calendar is somewhat easier to read: 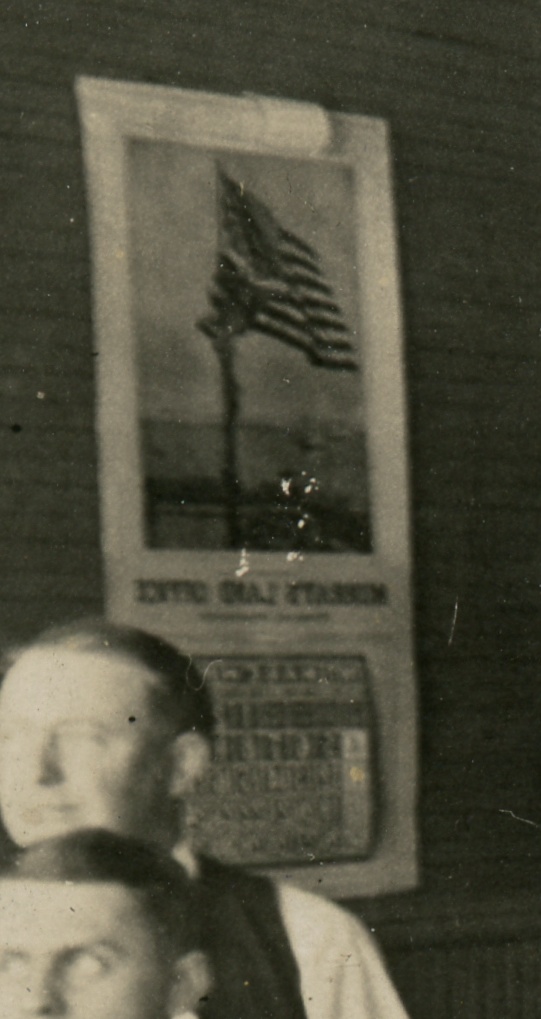 Here’s the reflection flipped to make it more readable: 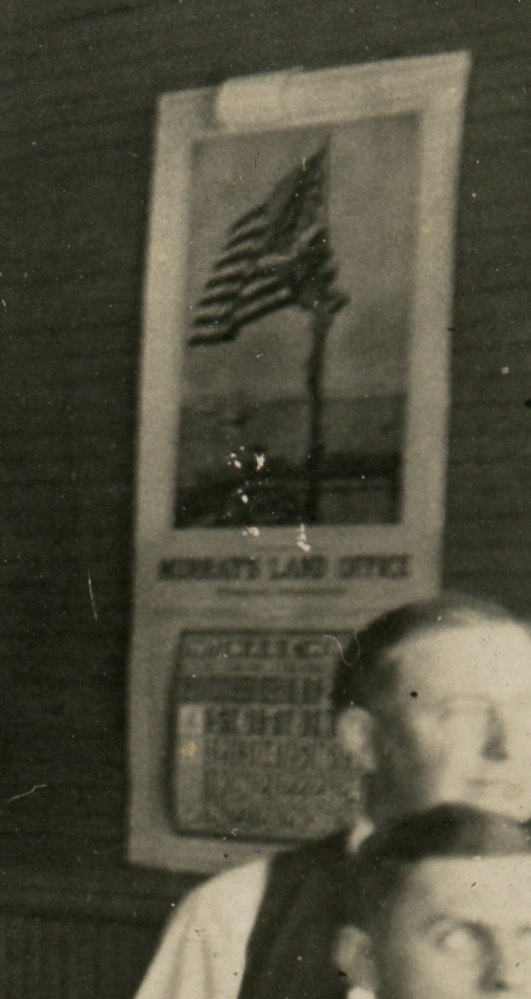 The calendar was distributed by Murray’s Land Offices, probably the business that was founded by Asher Murray, who was perhaps the single largest land owner in the region, gauging from the plat maps I’ve seen (and a business partner of Col. Joseph Askew, another of my ancestors). I’ll keep working on this image, to see if I can resolve the year and the month that were displayed.

There’s also an open newspaper on the bench in the back, from which we might have been able to discern the exact day and date of the photo if it had been in focus: 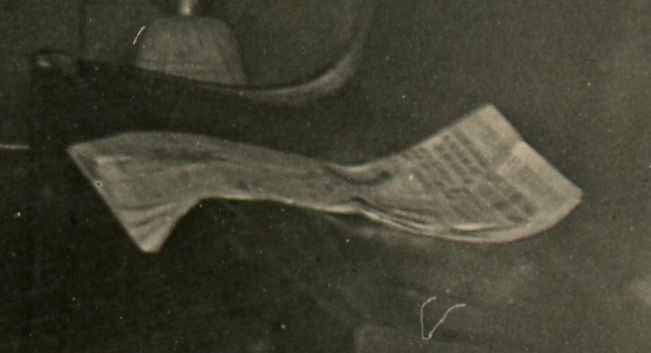 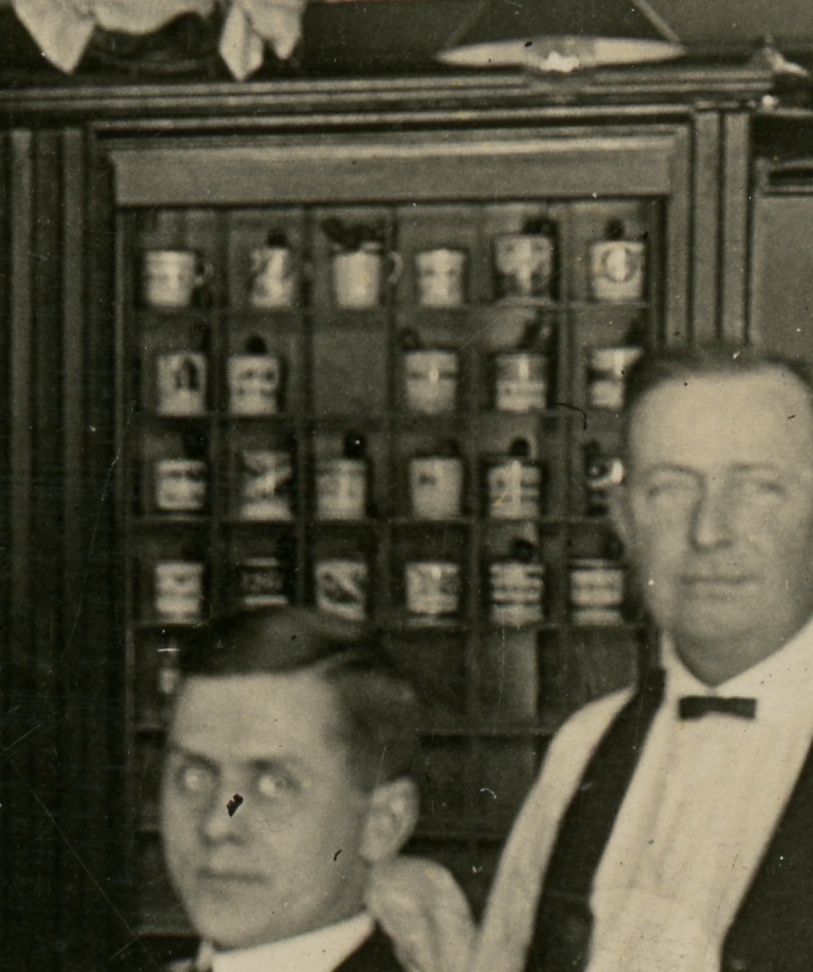 From their reflection in the mirror, we can see that there were a total of 23 personal shaving mugs on display: 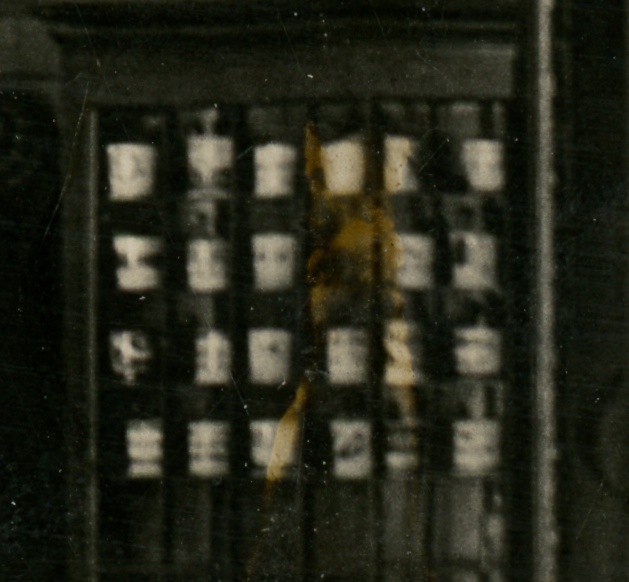 The tiny framed document shown below is too far out of focus to be able to read anything it said, but I’m guessing it’s a barber’s license. If so, since it’s a license, I may be able to find a record of it in the city or county records: 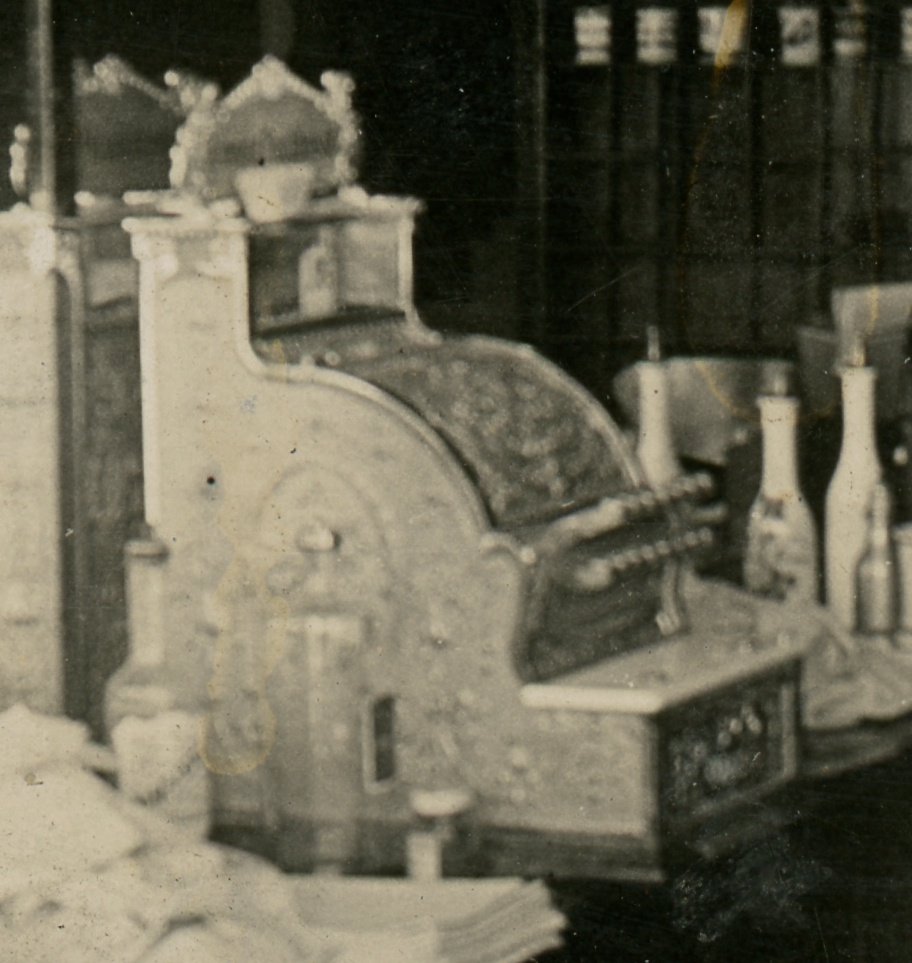 In the second photo, there are advertisements for other businesses visible behind the barber:

Once flipped, it’s easier to see that these are for:

These may help confirm the date of the second photo.

And finally, to foreshadow my next post, I’d like to point out the spittoon in the third photo: 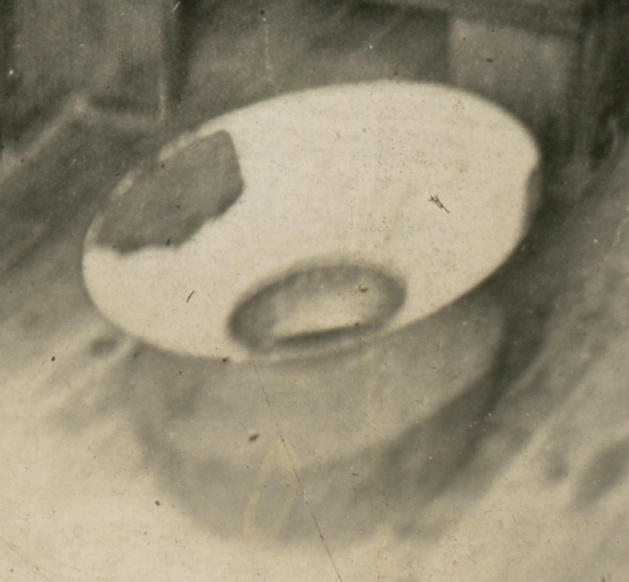 This spittoon (or rather, cuspidor) reference may seem odd now, but it will make more sense once I’ve written the next post…

1 thought on “The Prettyman barbershop, part 2”