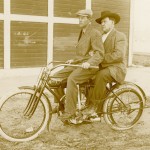 The photo itself is a glossy paper print measuring 5.1 inches by 7.1 inches. The print is mounted on a decorative bluish-gray matte. The matte measures 7.9 inches by 10.0 inches. The darker blue lines on the matte are lightly impressed into the matte.

There is no indication of the photographer or his studio.

Notes on the back of the photo read “Victor Yapp”, “His Dad James Yapp”, and “Original V B”. I believe that this last note refers to my grandfather, Vernon Black. Perhaps at one point when the family was dividing up photographs, he wanted to indicate that he wanted to have the original of this photo, and not just a modern reprint (at some point—probably in the 1980s—several family photos were photographed so that multiple modern reprints could be made). I do not believe that “Original V B” indicates that this is a copy for which Vernon had the original, because the photograph and the matte—while in superb condition—do appear to be quite old. 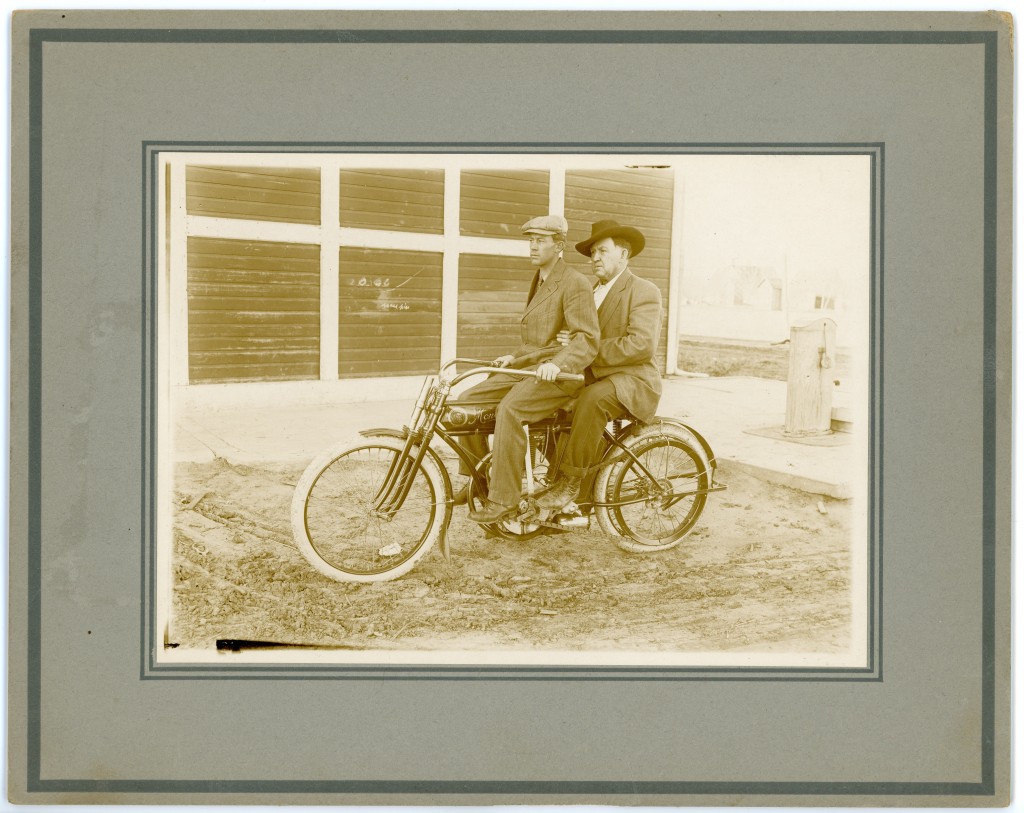 At the front of the gas tank, between the legs of Victor E. Yapp (seated at the front), enough of the manufacturer’s logo is present to identify this motorcycle as a Monarch motorbike.

The Monarch company manufactured bicycles for decades, but their foray into the manufacture of motorcycles was brief; Monarch only produced motorcycles from 1912 to 1915 (or perhaps only 1912–1914). The Yapp’s motorcycle looks quite new, clean, and shiny (except for what looks like a little mud from a quick spin around town), so I think the 1912–1915 date range probably applies to the photo as well. James Yapp died on July 25, 1917.

During the period from 1912 to 1915, as well as for several years on either side of this period, both Victor and James lived in Odessa township, Jewell County, Kansas, so I presume that the photo was taken in or near that area (Odessa, Mankato, Lebanon, Smith Center, Jewell, Ionia, Esbon, Burr Oak, Dentonia, Downs, or Cawker City). 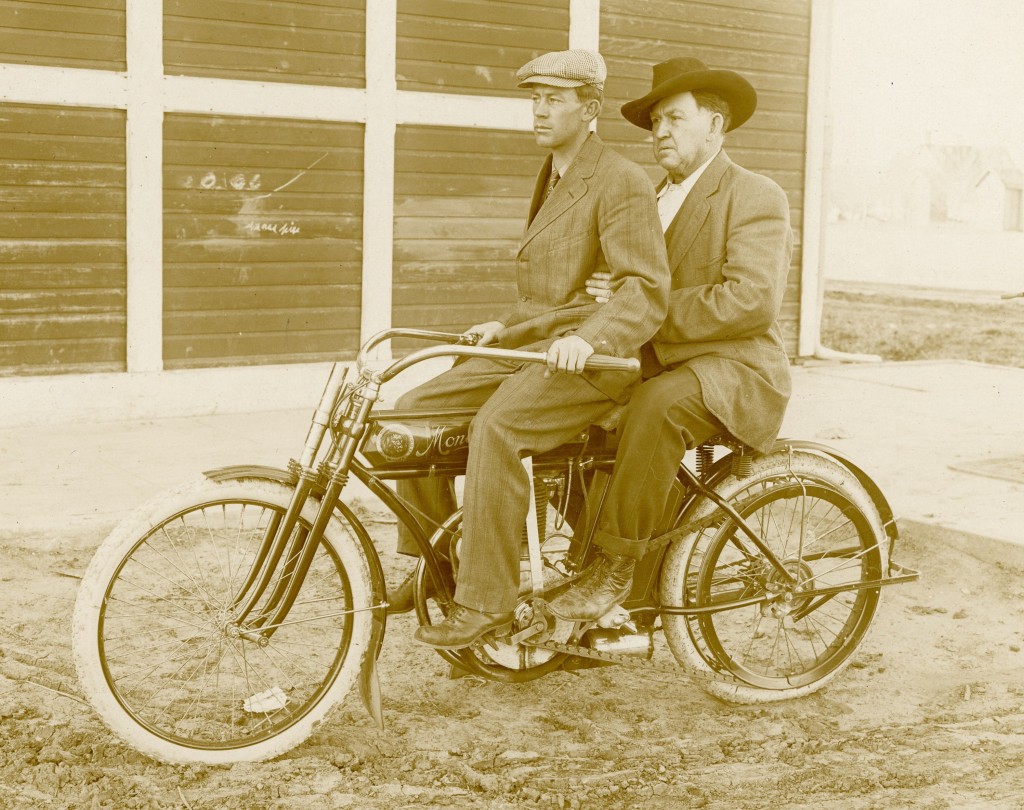 Compare their motorbike to this surviving example: 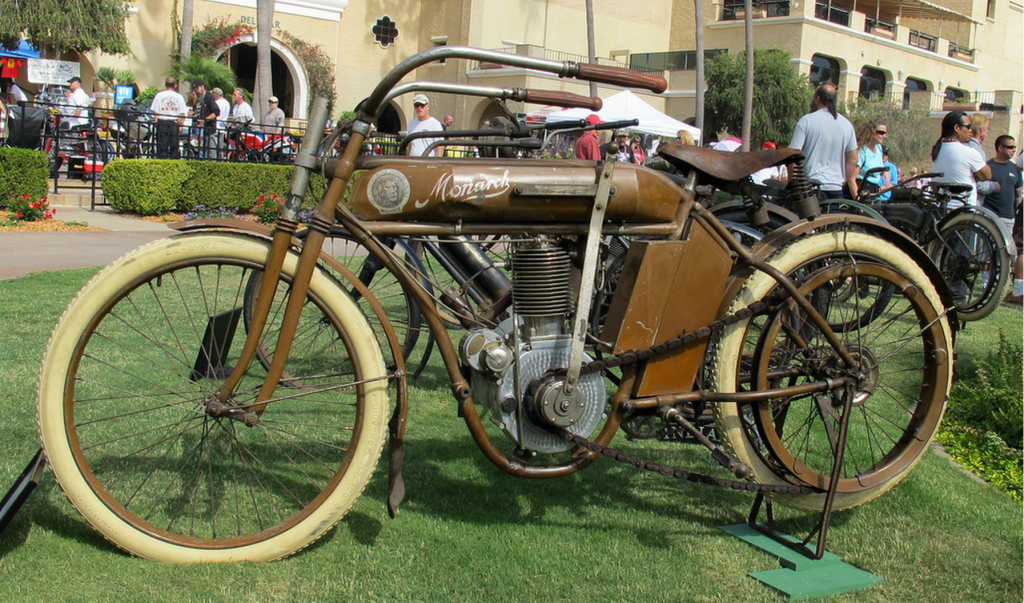 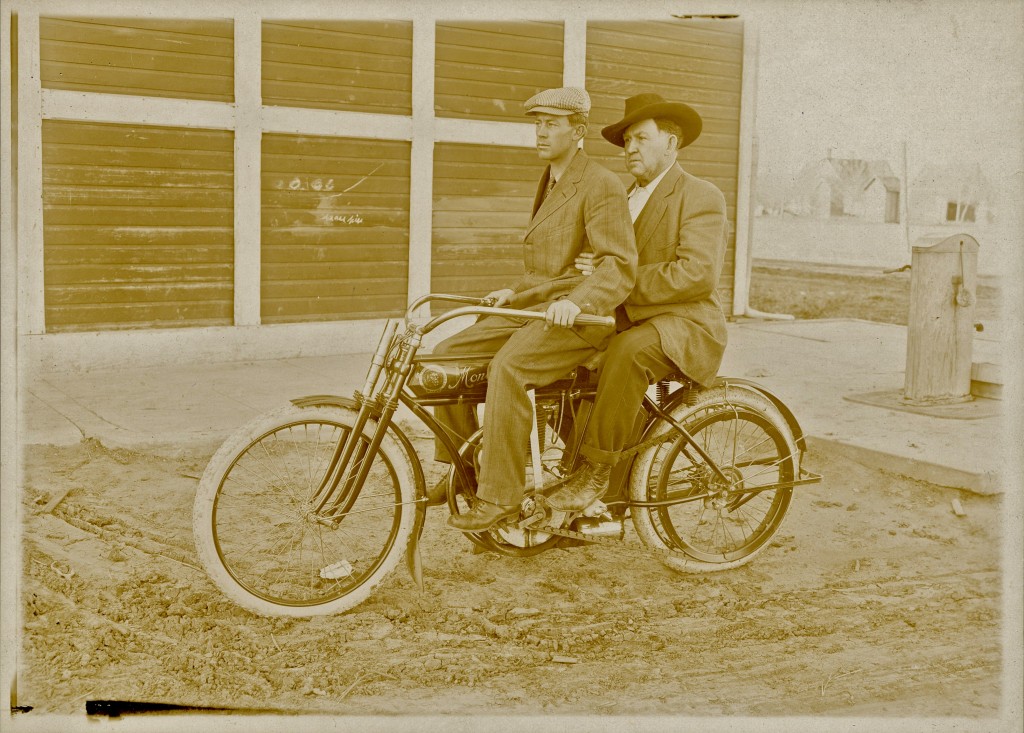 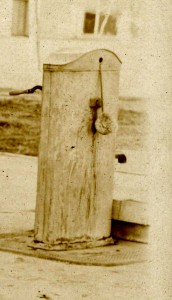 If we look at the entire photo again, and enhance it slightly to bring out some of the washed out detail in the photo, we can see that they’re sitting on the bike in a dirt street, adjacent to a concrete sidewalk. The wood-sided building on the other side of the sidewalk has a simple rain spout at the right corner of the building. Across the street we can see a pole, perhaps a telephone and/or power pole, and behind it a number of residential buildings, including two that look like outhouses.

The concrete sidewalk extends out into the street about five feet on the right side, and there is what appears to be a public water pump with a handle (far side) and a spout (right side). 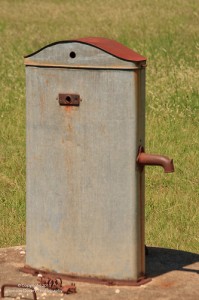 The water pump in the present photo very closely matches a pump found in Grapetown, Texas, and photographed by Bronson Dorsey for his historical blog, Lost Texas: Vanishing Texas Vernacular Architecture (see here for another close match, although unprovenienced).