In my first post on this topic, I wrote that my uncle Dan told me about two songs that he thought my great-grandfather, Charles Austin (C.A.) Prettyman, had written. Yesterday, after a little more digging, Dan learned that while his father (C.A.’s son) referred to these songs as “Charlie’s songs,” it was apparently because he (C.A.) sang them so much, not because he had written the songs.

Dan did a little research and discovered that “Saloon, Saloon, Saloon” was written in 1919, and that “Say Cuspidor was a barbershop take on another song called ‘Say au revoir but not good-bye‘”.

While that’s a bit disappointing, knowing the actual historical facts is ultimately more satisfying than believing in a history that never happened. So for today’s post, I’ll pass along what my uncle learned of these songs as well as some other bits I dug up.

My uncle discovered the lyrics to the song he learned as “Saloon, saloon, saloon” on this site. It turns out the song is called “Saloon — A tender ballad,” and here are the lyrics, as presented on the International Lyrics Playground site:

I’ve been looking through the dictionary
For a word that’s always running through my mind.
Though I love the name of Mother, I was looking for another,
And I must confess that word I cannot find.
Can it be that all its glories are forgotten,
And it’s buried with the language of the Greek?
If it is ’twill ever linger in my mem’ry
As the first word that I heard my daddy speak.

Saloon, Saloon, Saloon.
It runs through my brain like a tune.
I don’t like cafe, And I hate cabaret,
But just mention saloon and my cares fade away.
For it brings back a fond recollection
of a little old low ceiling room.
With a bar, and a rail, and a dime, and a pail.
Saloon, saloon, saloon.

I can picture swinging doors wide open.
I can almost see the sawdust on the floor.
And I dream of pals and cronies drinking highballs, steins and ponies,
I can see the name of “Ehret” on the door.
But the free lunch counter now is but a mem’ry,
It has vanished with the joys we used to know.
Never more we’ll hear that old familiar parting:
Just one drink, boys, just one more, before we go.

Saloon, Saloon, Saloon.
Have you been forgotten so soon?
You nestled so sweet in that little side street,
So respected, protected by cops on the beat.
Since you’ve left us the world seems in darkness,
like a cloud passing over the moon.
No more joys in my life, no more lies to my wife.
Saloon, saloon, saloon.

Nearly identical lyrics are presented on the perfessorbill.com site as well.

Note: [Ehret was not a saloon, it was the top selling American beer at the turn of the century, from German immigrant George Ehret’s Hell Gate Brewery near the East River in New York City, between 3rd & 2nd Aves, and 91st & 94th Streets. It would be like having a sign of “Coors” or “Fat Tire” on the door.]

According to Musical Compositions: Part 3, published by the Library of Congress Copyright Office in 1922, “Saloon,” described as a “mock ballad,” was first copyrighted on November 1, 1921. Here are the two entries for Saloon in this volume, taken from pages 1606 and 1649, respectively:

According to Frank Cullen’s Vaudeville, Old & New: An Encyclopedia of Variety Performers in America, Volume 1, George Whiting (1884–1943) was “a singing pianist who also doubled as an accompanist and songwriter” who “began his career in saloons and small-time vaudeville around New York City.”

Saloon was recorded at least a few times. The earliest recording that I could find is by Evelyn Knight backed up by Bob Haggart’s orchestra, and released in 1947 on the A side of a 10″ 78 RPM shellac disk by Decca Records (thanks to discogs.com for the photo and info): 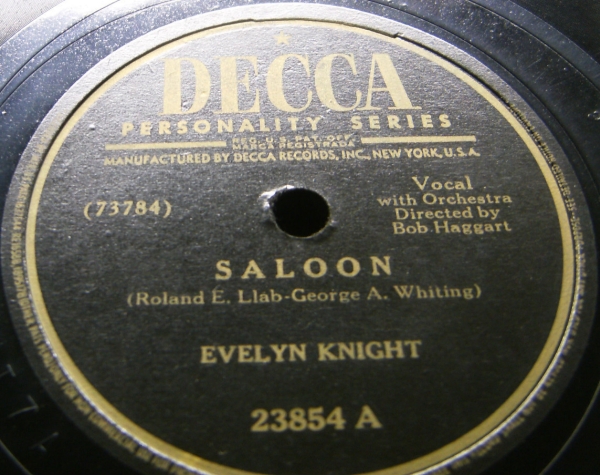 I’d be surprised if there wasn’t an earlier wax cylinder recording out there somewhere as well. The latest recording I could find is a 1989 CD by Max Morath (apparently no longer available on iTunes, but a 30-second sample from the first verse can be heard on the AllMusic.com site).

The song appears to have been a college drinking song in the 1950s (see the bottom of page 4 in this song book). Finally, “Saloon” is still being performed live by at least one group: the Minstrels of Earlville, as evidenced by their “tune list.”

If you know of sheet music for or recordings of this song, please let me know in the comments section.

I wasn’t able to find anything about the other song, Say Cuspidor, but my uncle tells me that “Say Cuspidor was a barbershop take on another song called ‘Say au revoir but not good-bye.'”

If you know anything about Say Cuspidor, or know of any sheet music or recordings of this song, please let me know in the comments section.