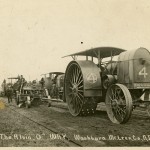 Among the handful of photos my grandmother Harriet Prettyman gave me in August 2012 were these two curious images.  When I asked her about them, she said her father, Clyde Lawson Askew, was a hardworking man who did many different kinds of jobs.  One of his jobs, she said, was that of road builder, and these were pictures of a project he had worked on.  In fact, she said, she had been told that he’s pictured in both photos, somewhere among the faces. 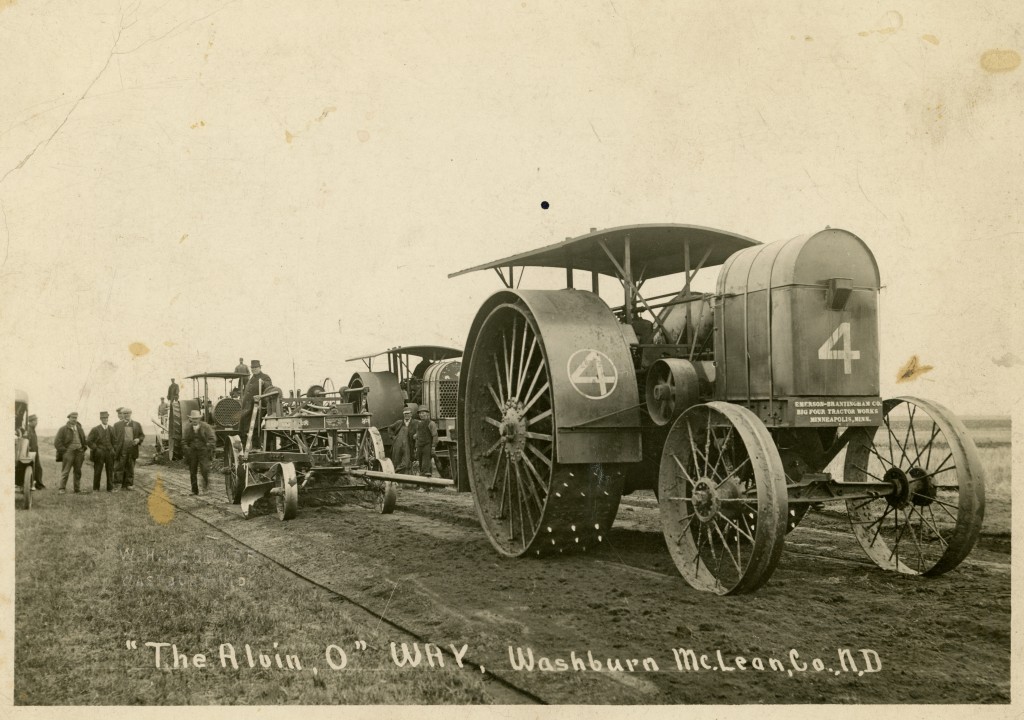 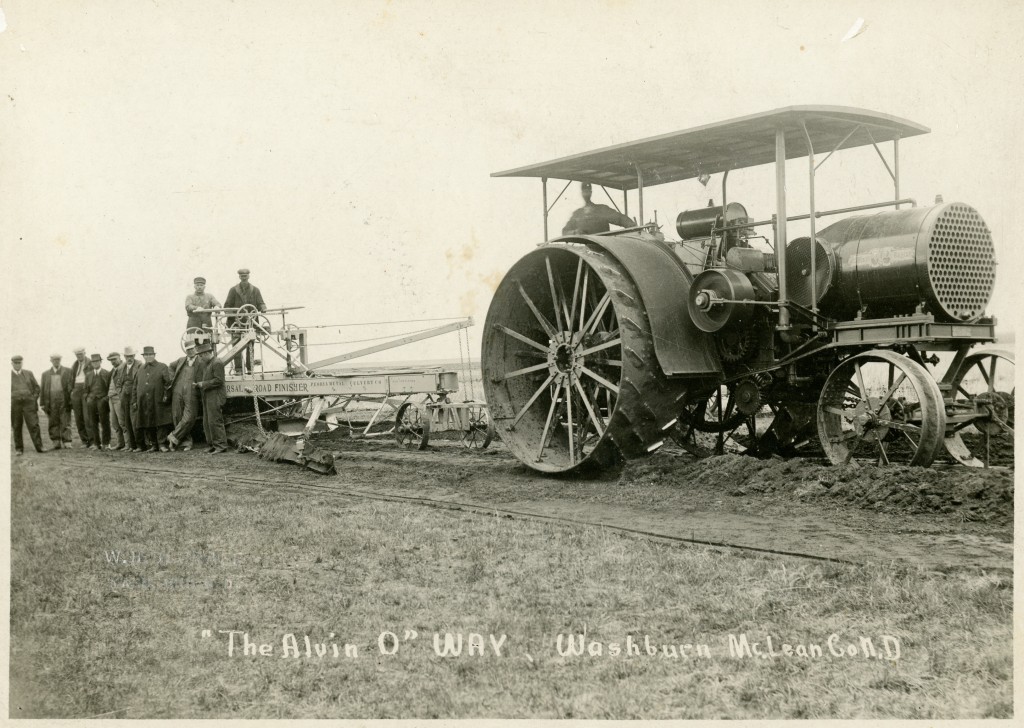 My impression was that the photos seemed a little too old to be photos of Clyde.  I don’t yet know the date of the photos, but I would guess that they were taken around 1910-1915.  Clyde Askew was born on May 7, 1896, so if my estimate of the age of the photos is correct, then he would have been only 16-21 years old at the time the photos were taken. 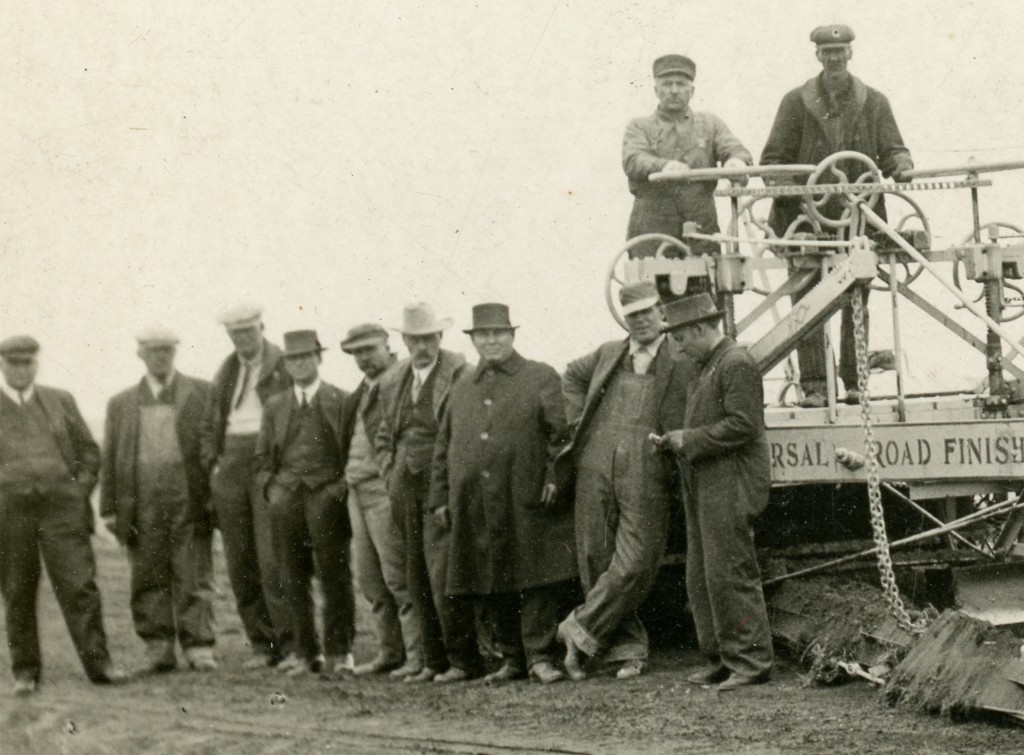 Looking more closely at the people in each photo, I made a few observations:

While one of the photos was loose (the yellower, stained photo), the other was glued to the inside back cover of a photo album that I believe belonged to Frank Scott (Clyde’s father-in-law).  This observation, combined with finding Frank Scott pictured in both photos, leads me to believe that Harriet may have overlaid her memories of her father Clyde’s road-building acumen (according to the 1940 census, Clyde was the maintainer of city streets for the city of Wadena) onto this photo of her grandfather, Frank Scott, shown working on a road building project.

So I believe these photos are of a road-building project in Frank Scott’s life, not one in Clyde Askew’s life.  Sorry, Clyde, I’ll spotlight you in another post.

The name of the photographer was embossed into the face of both photos: “W.H. DeGraff,  Washburn, N.D.”

Unlike Minnesota, which has this fantastic resource for determining the active years of photographers within the state, North Dakota has no such resource.  I did find another photo by this same photographer which was taken between 1906 and 1918, but that doesn’t help much, as the terminal date of 1918 was determined not because of the photographer’s active years, but because the ship in the picture sank in ice on January 12, 1918.

Another of the machines in one of the photos (the Road Finisher) was made by the Peoria Metal Culvert Company.

I found several published mentions of this company, all between 1912 and 1916, but only one of the references mentioned the company in the context of road building.  The Peoria Metal Culvert Company of East Peoria, Illinois, was mentioned as the manufacturer of a road finisher on page 366 of the “Good Roads Year Book of the U.S.”, published in 1916.

I haven’t been able to find any reference to “The Alvin O Way” in any of my searches.  I suspect that this may have been an informal name for the project or for the methodology, and as such, was not recorded in any official records.

On page 52 of volume 36 of The American Contractor (September 4, 1915), in the “Street Improvements” section of the serial, I found the following notice:

Washburn, N. Dak.—Bids will be received by commissioners of McLean county, E. C. Stocker, aud., until 2 p.m. Sept 7, for grading.  Bond required. Survey at above office.

I think that it’s actually fairly likely that the work in the photo is the same as that being solicited in the bidding notice mentioned above, based on the size of Washburn, ND. Washburn, ND, is and was a very small town (pop. 657 in 1910, and 558 in 1920) with very little land (1.8 square miles) and very few roads.  There would, therefore, probably not have been many road projects in the 28 years between 1909 and 1937.  One major exception was the construction of U.S. Route 83 in 1926.

According to pages 118-120 of the Good Roads Year Book of the U.S., state funding for roads in North Dakota was only approved by voters in November, 1914.  A surge of state-funded roadwork was undertaken in 1915 and 1916 as a result of the new legislation. According to this same reference, the members of the newly formed Highway Commission were closely involved with highway projects in these early years, so it’s possible that the two better-dressed men in these photos are two of these politicians visiting the site (and having photos taken to commemorate the visit).  The commissioners included Jay W. Bliss (State Engineer), Gov. Louis B. Hanna, and C. A. Grow.  In comparing a series of photos of Governor Louis B. Hanna to the man in the distinctive cowboy hat, I saw a number of similarities that made me think Mr. Smartly Dressed Cowboy Hat could be Governor Hanna.   If that were the case, then Gov. Hanna’s years in office (from 1913 to 1917) could help narrow down the age of the photo. 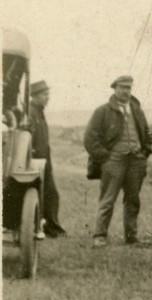 A final clue is the automobile on the far left side of the first photo (pictured at left).  It appears to be an early-model convertible, parked facing the camera.  There’s what looks to be a spare tire on the left door.  The wheels and hubs remind me of early Fords or Cadillacs; something like a 1913 Ford T Torpedo or a 1912 Cadillac Model 30 Torpedo.  The narrow, rounded profile of the tires and the apparent lack of tread point more to a 1910-1915 model than a 1920-1925 model.

While I can find nothing that rules out the 1926 construction of U.S. Route 83 as the date and subject of the photos, the preponderance of the evidence points to the photo being taken sometime between 1915 and 1916, probably between middle-to-late September 1915 (just after the bid for the project) and Summer, 1916 (when it would have been too hot for everyone to be wearing hats and coats at the worksite).  In that case, Frank Scott would have been 46 years old when these photos were taken.

My wife just found a third photo in this series online at the McLean County Historical Society: 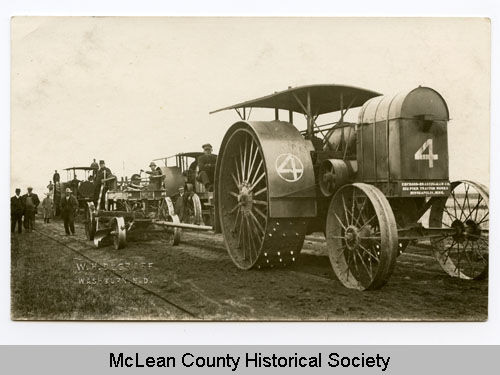 This photo appears to have been taken from the same place as the first photo pictured above, and within moments of that photo, as nearly everyone is in the same positions in the two photos.

If only this were available at a higher resolution!  Their information is also speculative and doesn’t add much to what I’ve already said above, except for two points:

More on this project here.

1 thought on “Hit the road, Clyde”