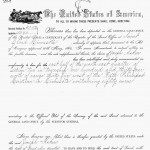 Yesterday all I knew of the location of Joseph Askew’s homestead was that in the spring of 1875, immediately after arriving from Gosforth, England, via Liverpool, New York, and Duluth, Joseph claimed his homestead about five miles east of Wadena. This evening I learned exactly where his homestead was, after finding his 1882 homestead certificate in the U.S. General Land Office records. 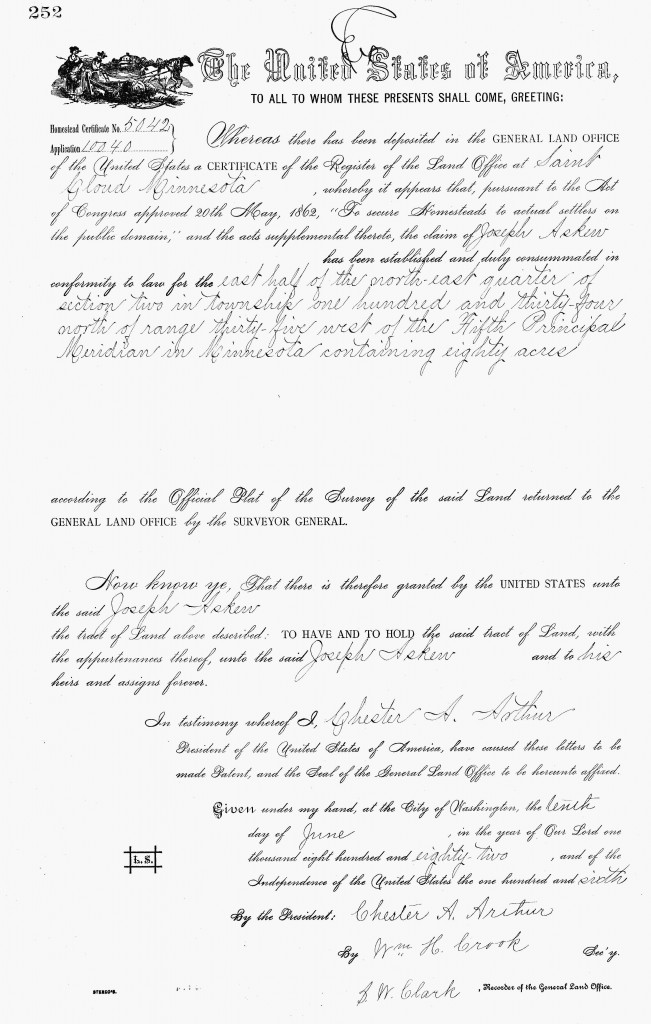 According to this certificate, his homestead was located in the E ½ of the NE ¼ of Section 2 in Township 134 N in Range 35 W of the 5th principal meridian in Minnesota. While such PLSS notation has been used for the better part of the 227 years since it was invented by Thomas Jefferson, precisely identifying such coordinates in a digital world is becoming increasingly difficult. Thanks to the fine folks at Earth Point, PLSS datasets are available for browsing in Google Earth. I’ve highlighted the Askew homestead in blue on the maps below. 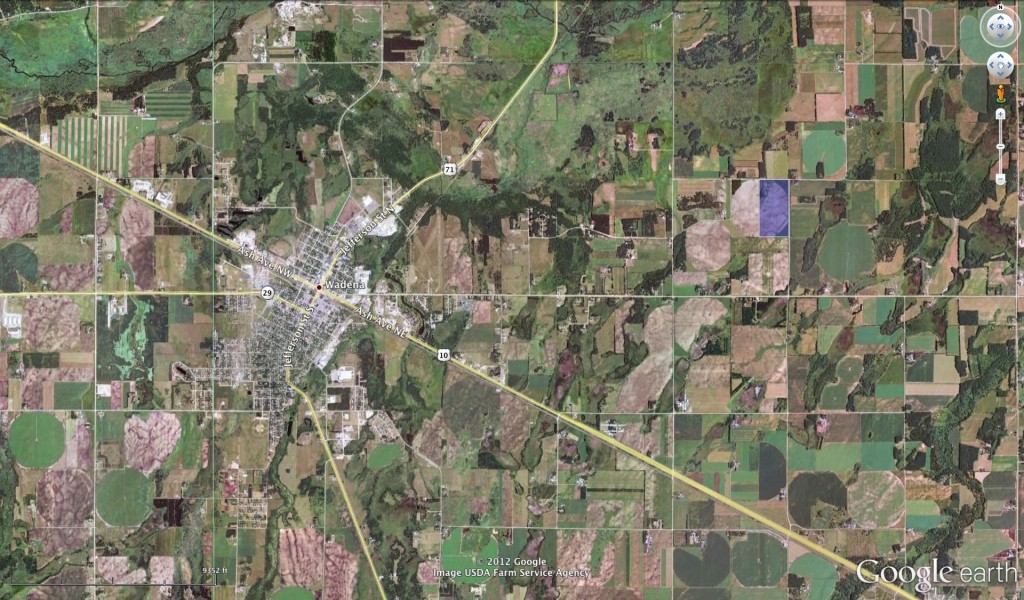 In the first map above, you’ll see that the Askew homestead is about four air miles from the center of Wadena, mostly east and a little north of the town. 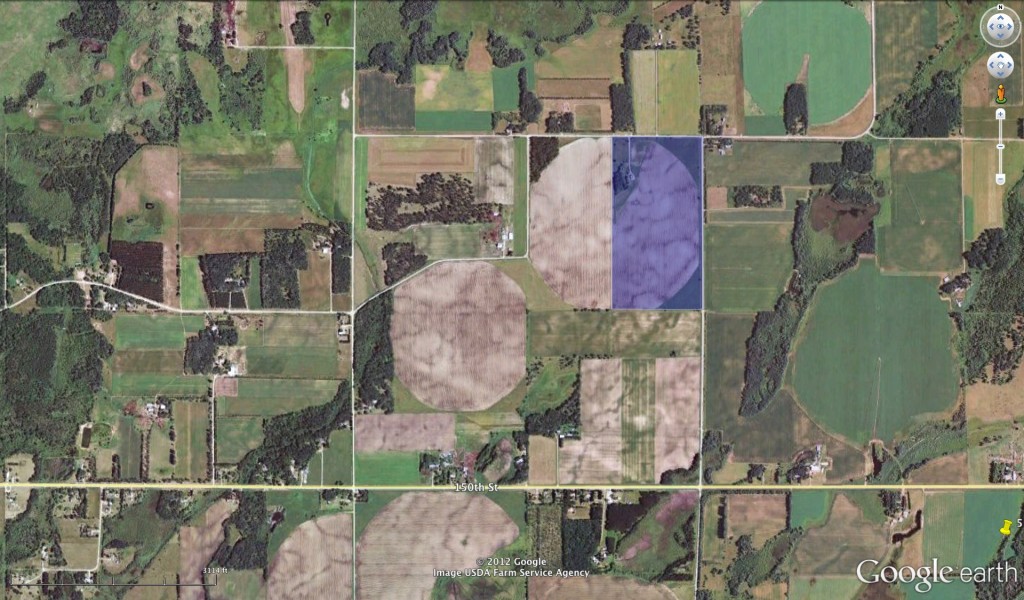 Getting a little closer, you can clearly see the square outline of Section 2 in the center of the satellite photo above. 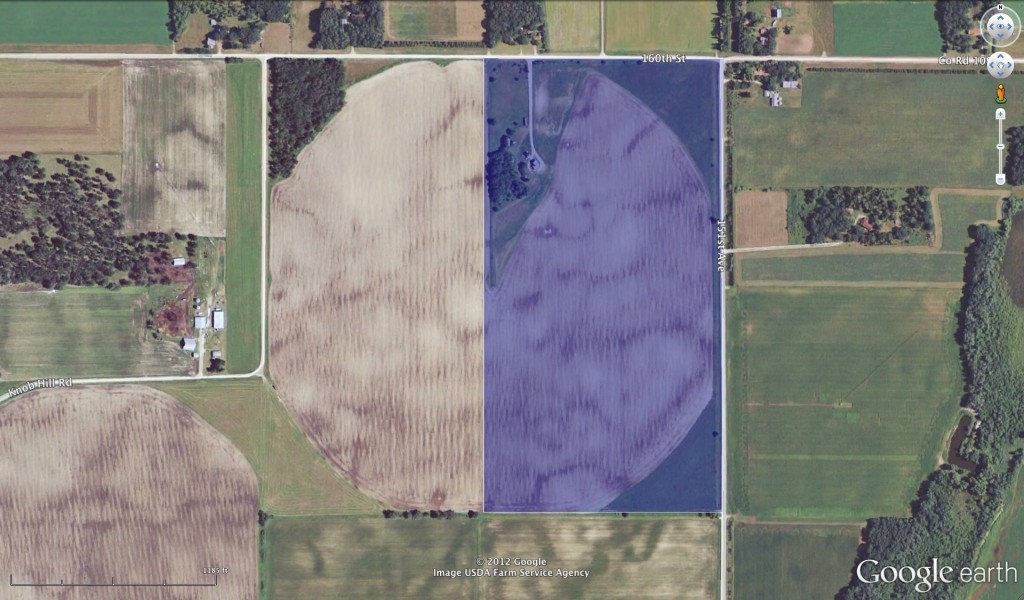 The image above shows the extent of the Askew homestead, as defined on the 1882 homestead certificate. This parcel is now half of a single farm. Several buildings exist on the Askew homestead portion of the farm, and you can be certain that I’ll be contacting the owner of this farm soon to ask for permission to visit when I’m in Wadena this November!

The following photo, however, gives me cause for concern. Except for the silo, the buildings appear to be destroyed (perhaps by the horrible 2010 Wadena tornado?). I’m hoping I’ve merely misinterpreted the photo, because I’d hate to know that the buildings of the Askew homestead stood for over 135 years only to be destroyed on the eve of my first ever trip to my ancestral stomping grounds. I take some consolation in knowing that the path of the tornado was about four miles from this place, and no other tornados struck this area since 1977. 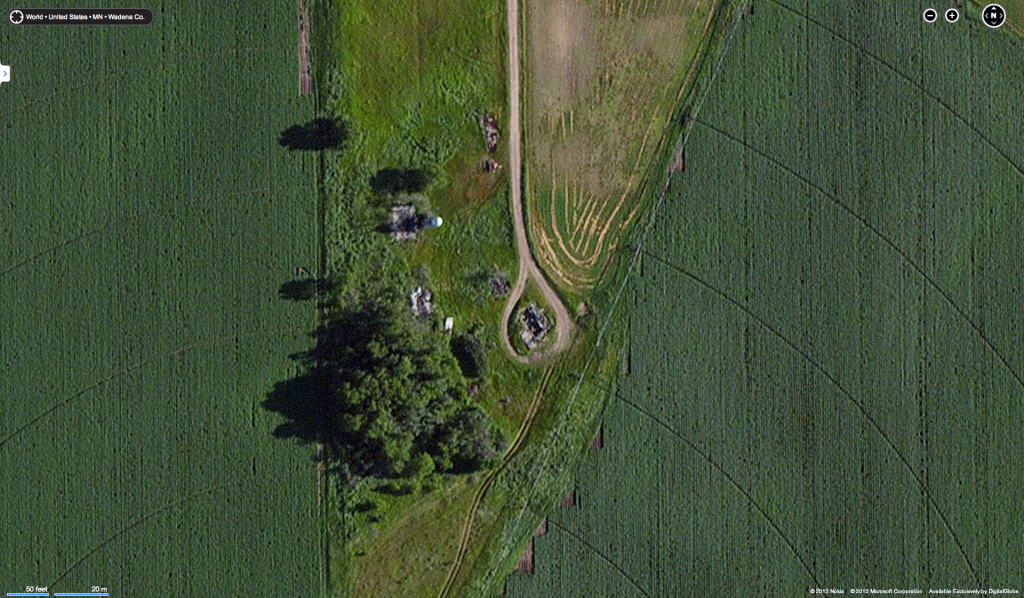 Check out part 2 for an update of what I found once I arrived in Wadena.