Imagine that you were born in a rural area to poor parents in the back room of your rented house. Your parents moved a lot, and they never told the county officials that you were born. So no birth certificate was ever registered. And then your dad leaves your family when you’re five years old, leaving your mom alone with you and two younger siblings. You’re upset about that and change your last name to that of the kind man who married your mother and stepped into the father role in your family. But for whatever reason, you and your family don’t make the adoption legal, nor do they inform the county or state officials of the name change. And then for unknown reasons, you decide to change your middle name, too, from the traditional Dutch Cornelius to the hip, modern “Curtis.” And again, no government agencies are informed. We’ve all been there, right?

This presents no problems for you for most of your life. You get your Social Security card, you enlist in the Army and serve in World War II, you pay your taxes, you work until your early 60s and you’re beginning to think about your retirement. And then you apply for your Social Security retirement benefits and discover that—poof—you have no proof that you are who you say you are.

What do you do now?

This was the situation my grandfather Vernon Curtis Black (born Vernon Cornelius Shearer) found himself in in early 1978.

I just stumbled upon a series of documents that he assembled and kept in a safe deposit box until his death. These were the documents (at least some of them) that he was gathering to prove that he was who he said he was.

Preparing to apply for his Social Security retirement benefits, he wrote to the Department of Health in his birth state of Iowa to request a copy of his birth certificate. I suspect he may have known this wasn’t going to be straight-forward, as he applied (and signed) using a name he hadn’t used in nearly six decades: Vernon Curtis Shearer. 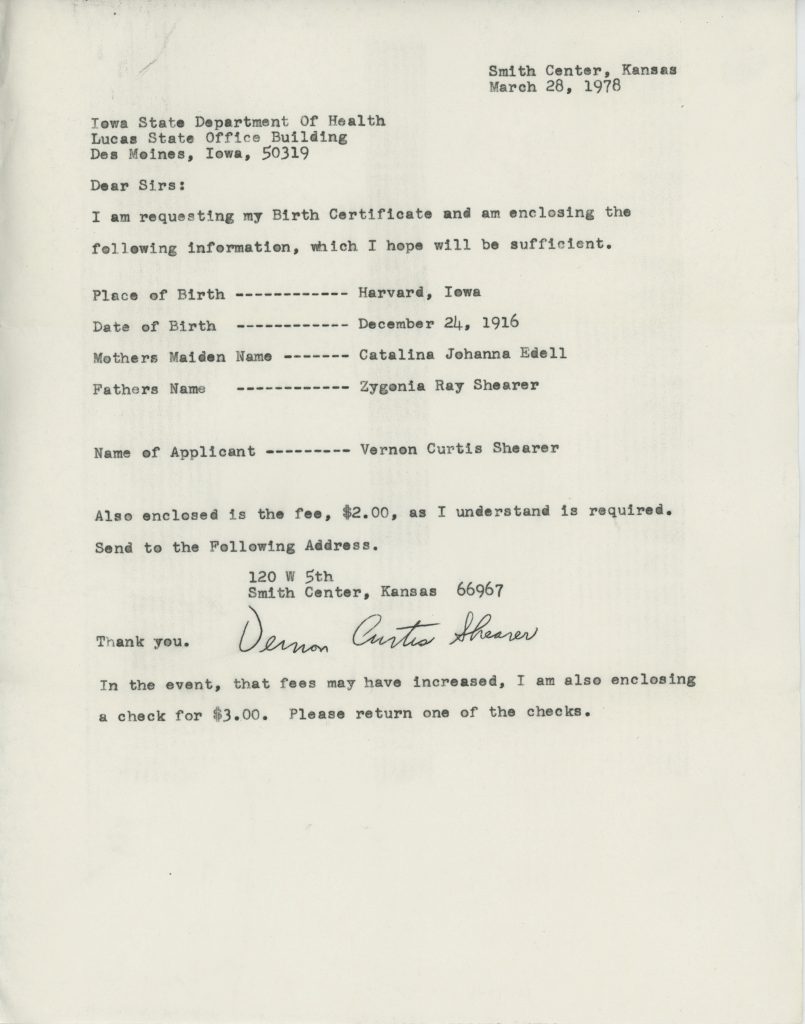 The response from the Iowa State Department of Health was not included with this set of papers, but presumably it said something to the effect of “We can find no record of your birth. Here are both of your checks back.”

I suspect he knew that there would be no birth certificate, and that he had traveled back to where his mother Catalina (Edel) Shearer Black lived in Smith Center, Kansas, to try to resolve the situation in person.

Vernon wrote the above letter on a Tuesday and presumably heard back from them by the end of the week, as the following Monday he already had the custodian of records for the Dispatch Christian Reformed Church (where Vernon’s Dutch grandfather led the congregation when Vernon was young) swearing an affidavit in Osborne County, Kansas: 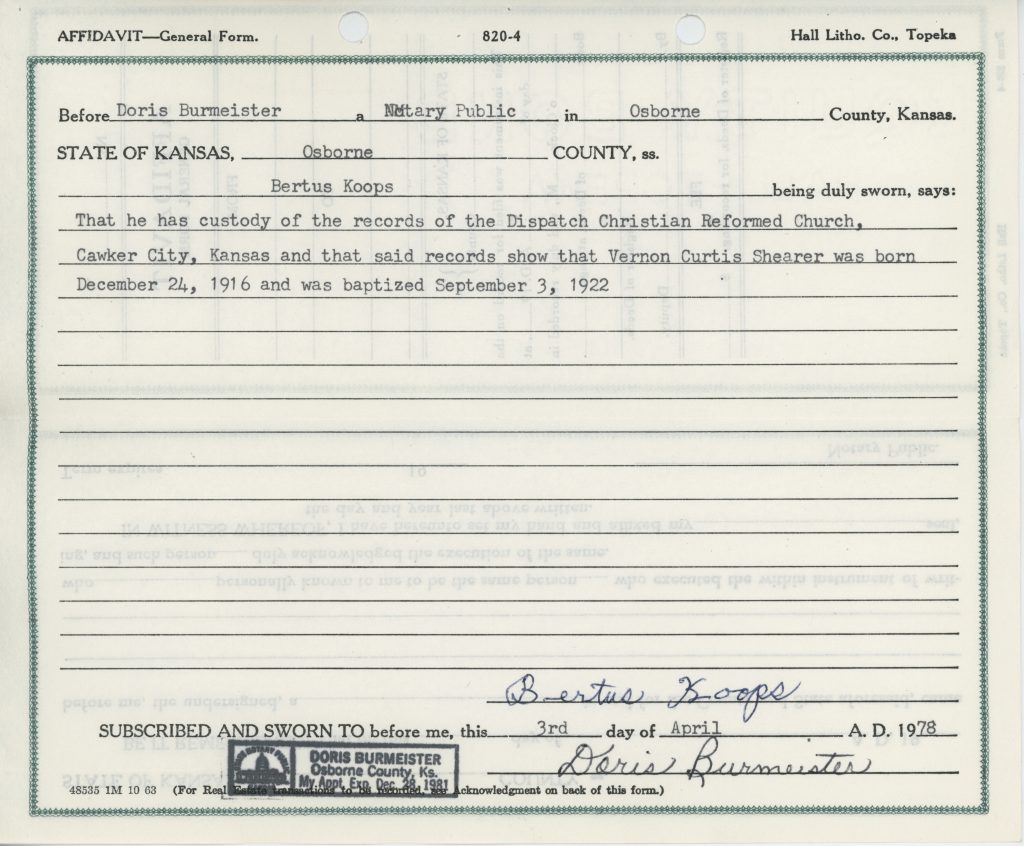 A little over two weeks later, Vernon had his mother Catalina swear an affidavit about the facts surrounding Vernon’s birth and name change: 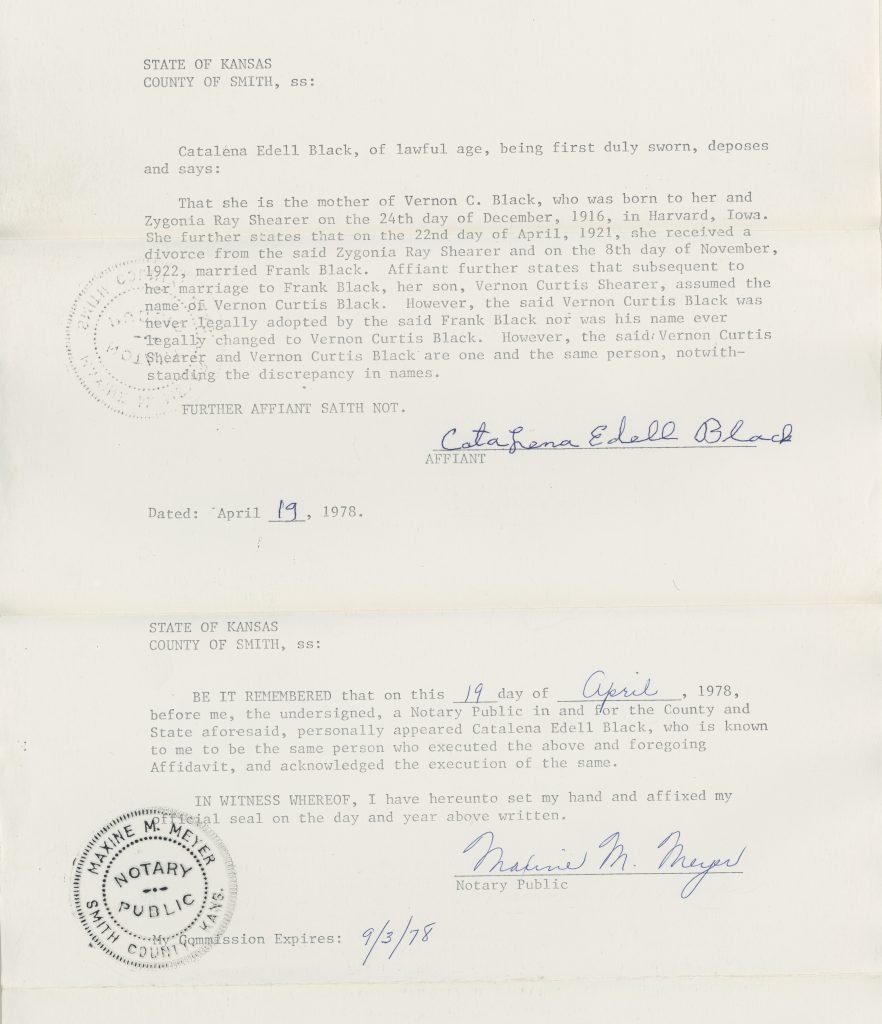 Apparently during this same time period, Vernon secured the services of an attorney, James L. Bush, from the Smith Center, Kansas, law firm of Windscheffel & Bush. James Bush apparently wrote again to the Iowa State Department of Health and received this response: 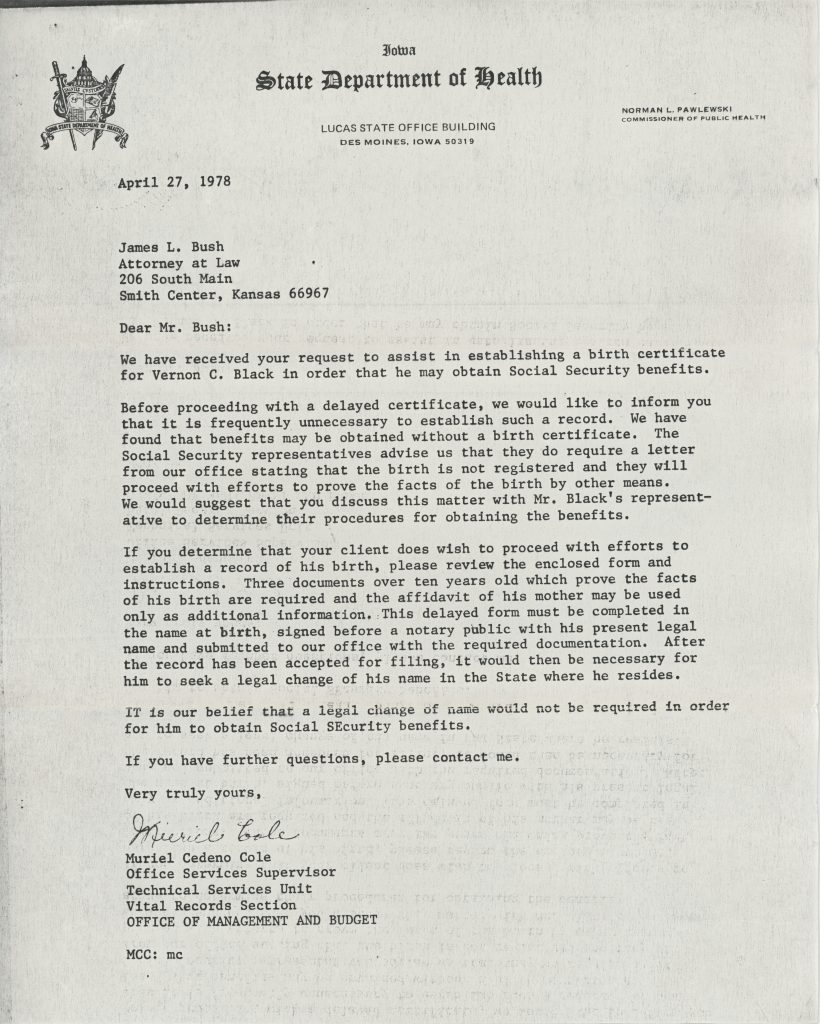 So he learned that he probably didn’t need to establish a ‘delayed’ birth certificate for the purposes of obtaining Social Security benefits, but if he wanted to do so, he’d have to find three or more sources that were at least a decade old that proved his birth details, and then he would have needed to finally legally change his name from his birth name to the name he had used for nearly 60 years.

His attorney asked him how he wanted to proceed, and from the lack of further correspondence, I presume he chose not to pursue establishing this ‘delayed’ birth certificate: 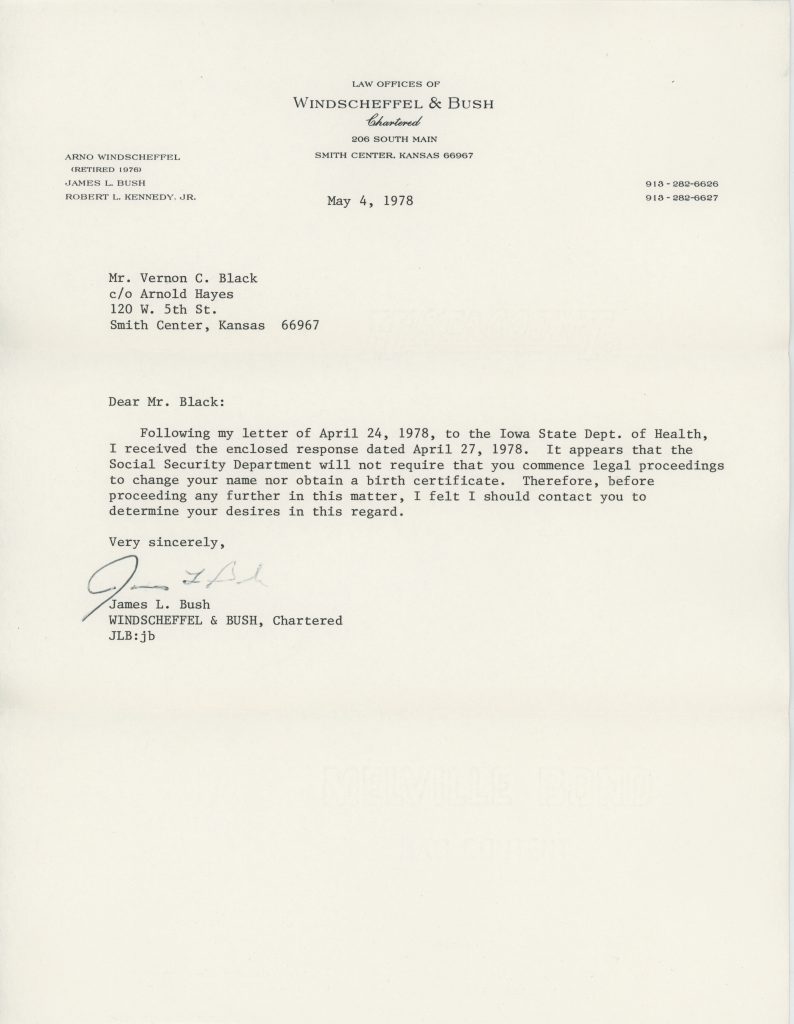 Also in with these papers was a military trifold filing envelope containing his honorable discharge and other papers: 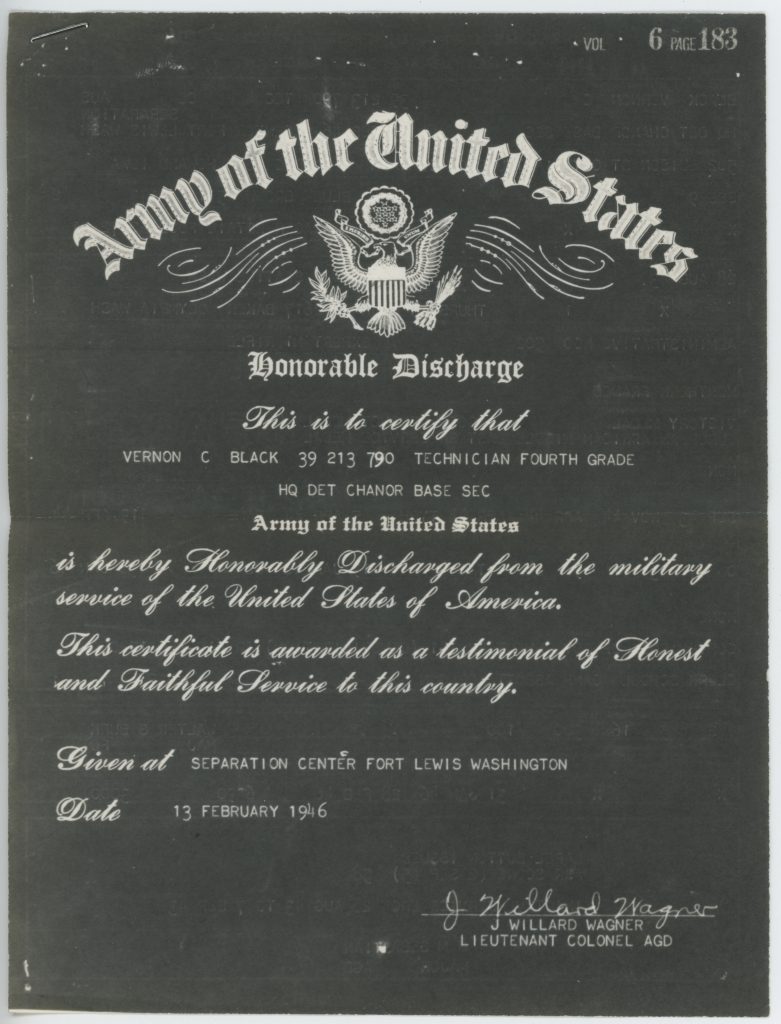 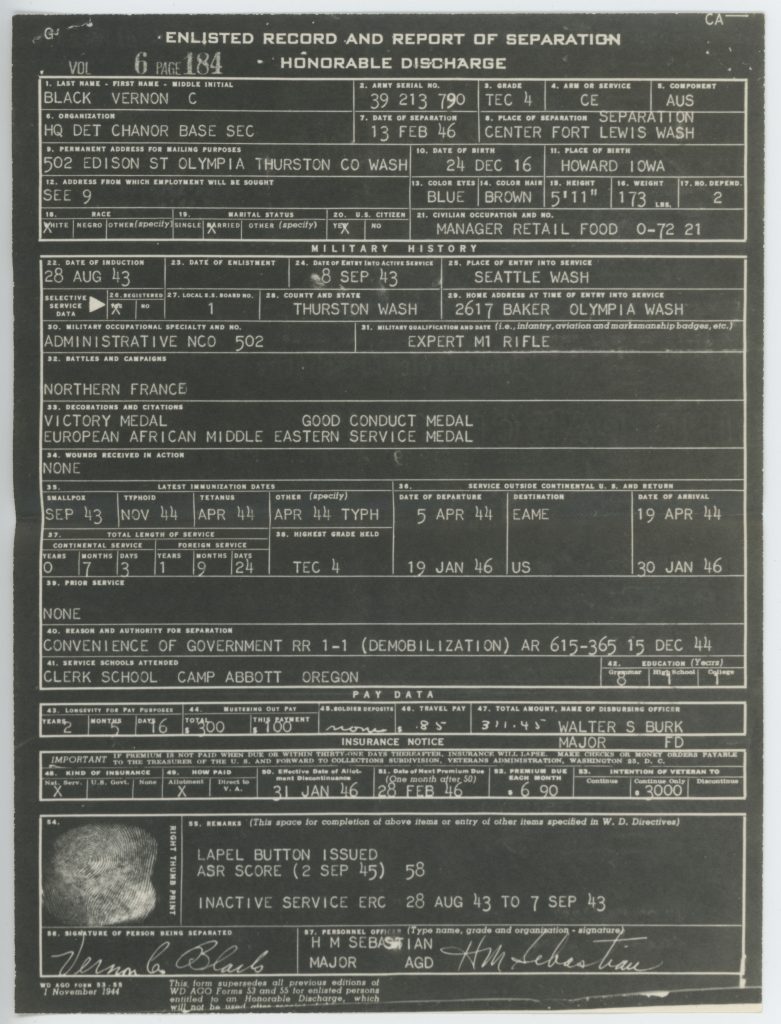 Also in the honorable discharge envelope was a laminated, wallet-size, positive version of the above two documents: 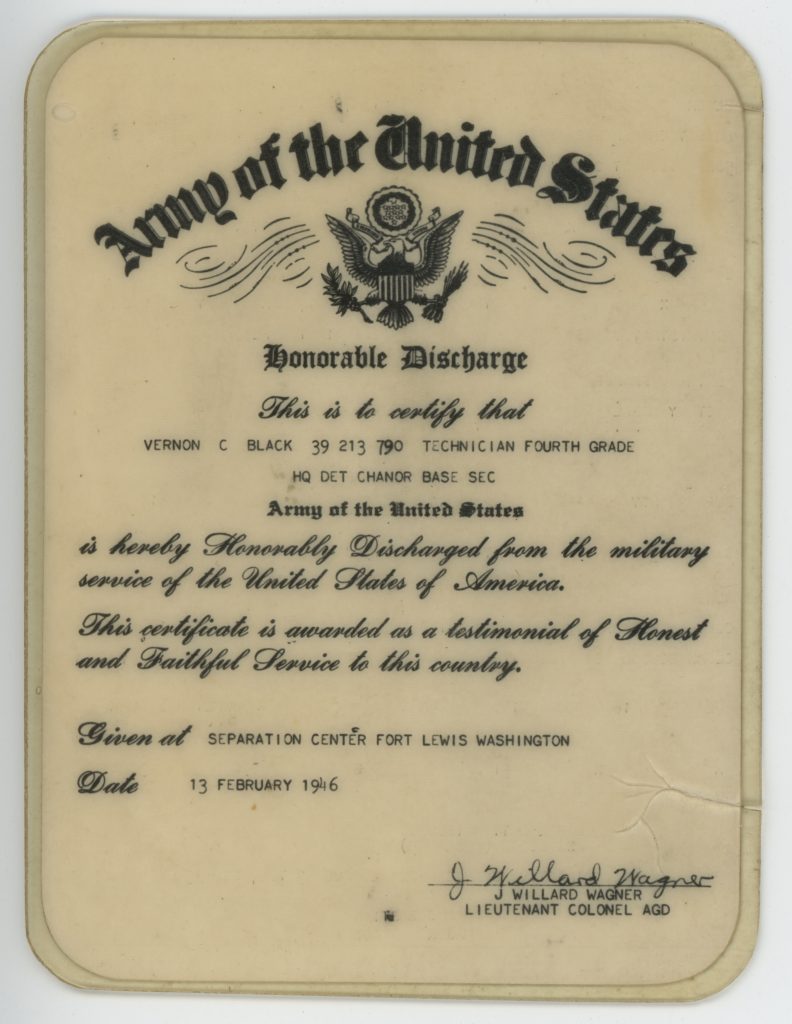 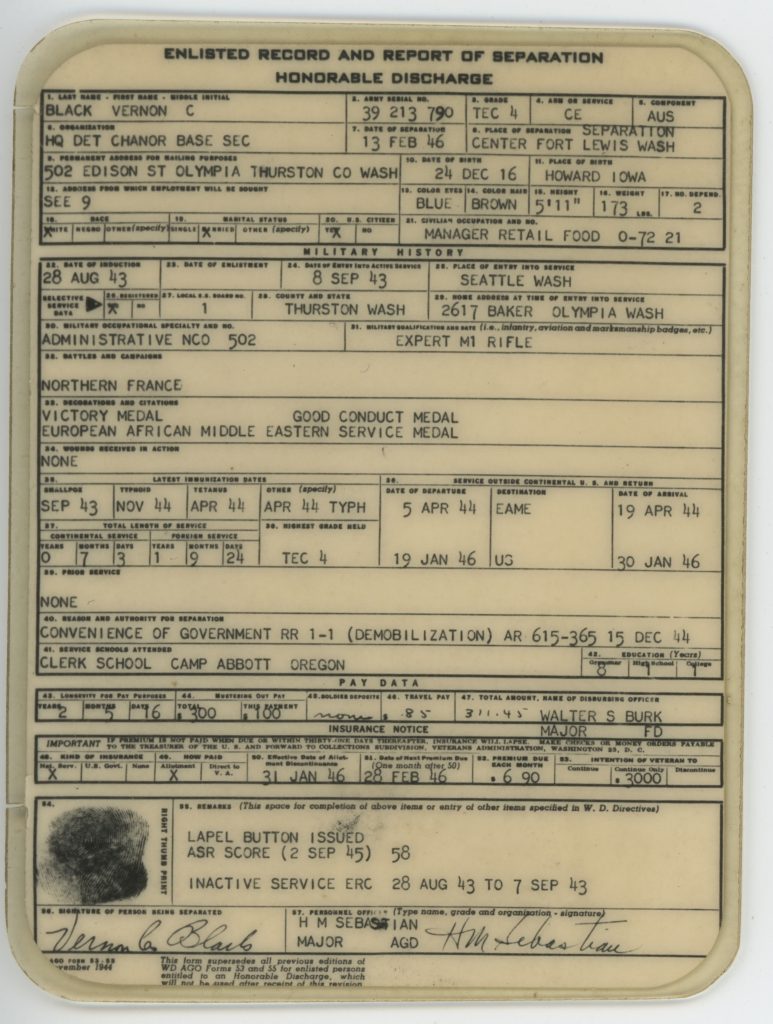 Finally, there was also a 1954 Veteran’s Exemption Application for Los Angeles County, dated January 25, 1954. I don’t have an exact date for when he and Dorothy bought their house at 13847 Hamlin Street in Van Nuys (Los Angeles County), but I suspect that this was used by Vernon when purchasing their new home in Van Nuys.

This whole package of papers was contained inside an envelope from his lawyer, which was covered in notes in his wife Dorothy’s handwriting:

So my grandfather Vernon was born 102 years ago this year and never had his birth certified or his name legally changed. He almost got these matters legally wrapped up in 1978, but apparently chose to take an easier path to getting his Social Security retirement benefits.

Fourteen years later, in 1992, not knowing about my grandfather’s quest for his non-existent birth certificate, I sent the following request off to the Iowa State Department of Health (my last name and address redacted for privacy reasons). To the best of my recollection, I heard nothing back from them on this request: 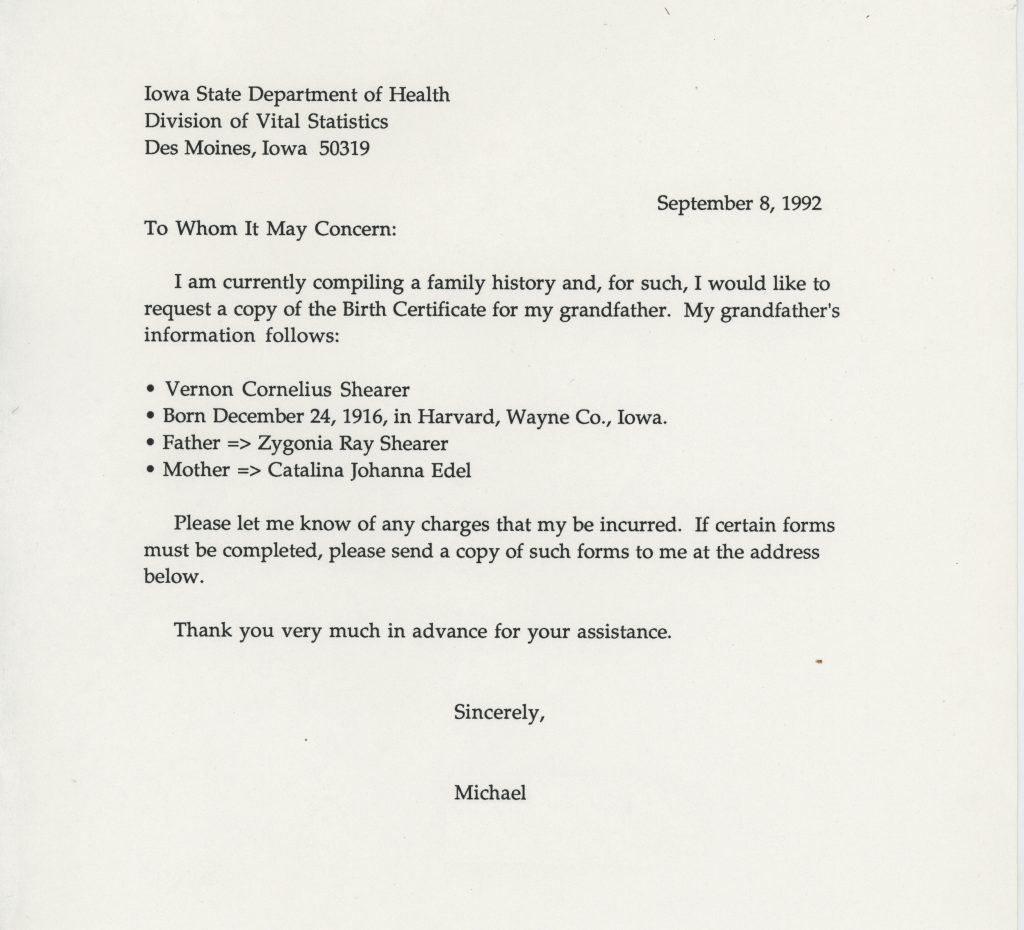 Hopefully the documents that he gathered together and that my grandmother and father preserved will be sufficient to document the birth of my grandfather for purposes of joining hereditary societies. If not, I have hundreds of letters he wrote over several decades to his parents and other family members that would also support his relationship to them (unless this was one heck of a long con he was running).

2 thoughts on “So, you don’t legally exist?”