In my previous post, I concluded that my 3rd-great-grandmother Anna/Annie Horan and Anora Lee Prettyman (the wife of my 3rd-great-uncle Francis M Prettyman) were the same person. In this post, I’d like to present what I know about who Anora Lee was and where she came from. I’ll focus here on her pre-marriage years, as I’ve already written a bit on what she did once she got married and had kids.

Anora (aka “Anna”, “Annie”, and “Anny”) Lee was born in Wayne Township, Randolph County, Indiana. Modern Wayne Township has a population of 4,611, and includes the western two-thirds of Union City, as well as the small towns of Harrisville and South Salem. Wayne township used to be the location of five towns: Bartonia, Harrisville, Randolph, Salem, and Union City. Randolph ceased being a town before 1850 according to the History of Randolph County, Indiana. 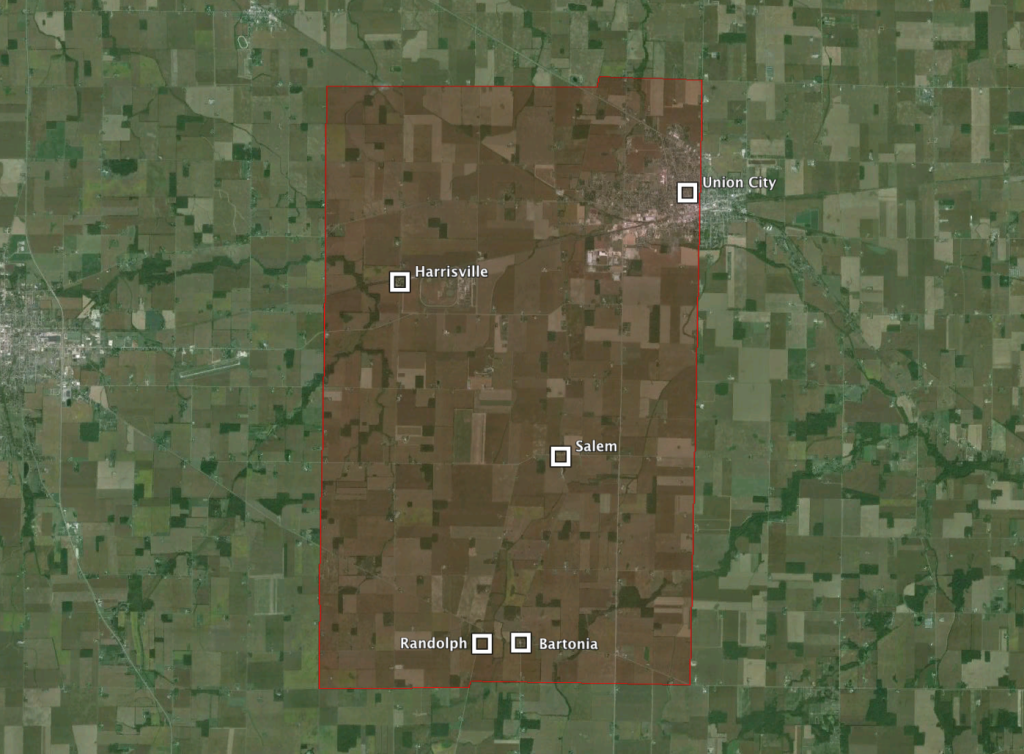 Quite a mouthful of names, these. And quite an assortment of name origins:

Jehu/John and Rosanna’s first six children were born in Wayne Township, with the exception of Levi, who was born in Ohio. The eastern boundary of Wayne Township also forms the state line between Indiana and Ohio, so Levi may have only been born a few miles to the east of his siblings. Wayne Township is highlighted in red on the map below: 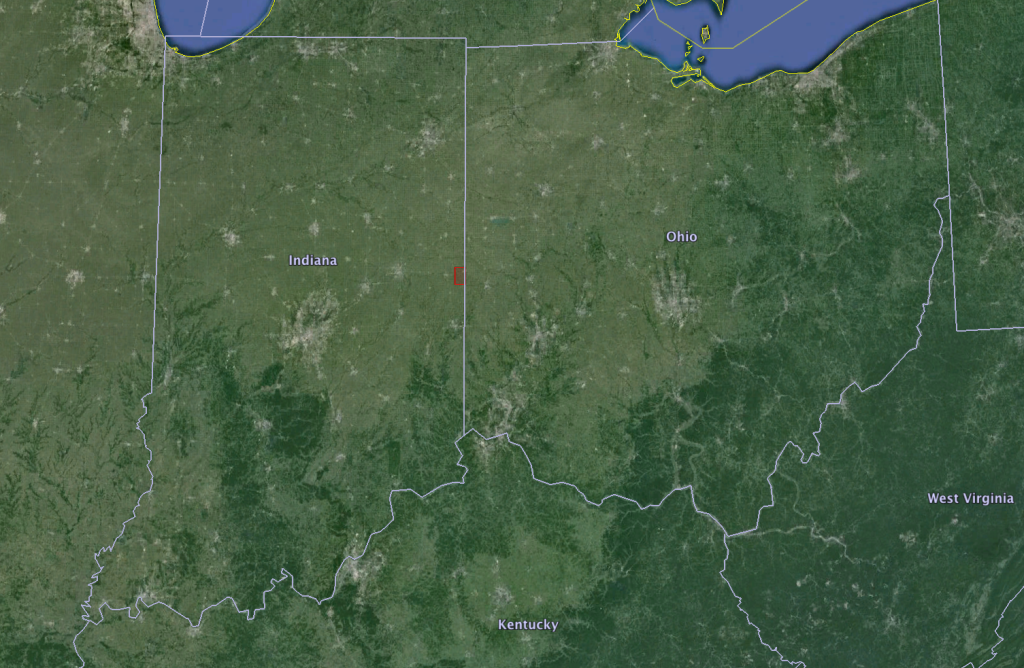 Around 1853, Anora was the last sibling to be born in Wayne Township, Randolph, Indiana. At some point between 1853 and 1855, Jehu/John and Rosanna took their six children and moved 500 miles west to Knox Township, in Clarke County, Iowa. It was in Knox that the last three Lee children were born. 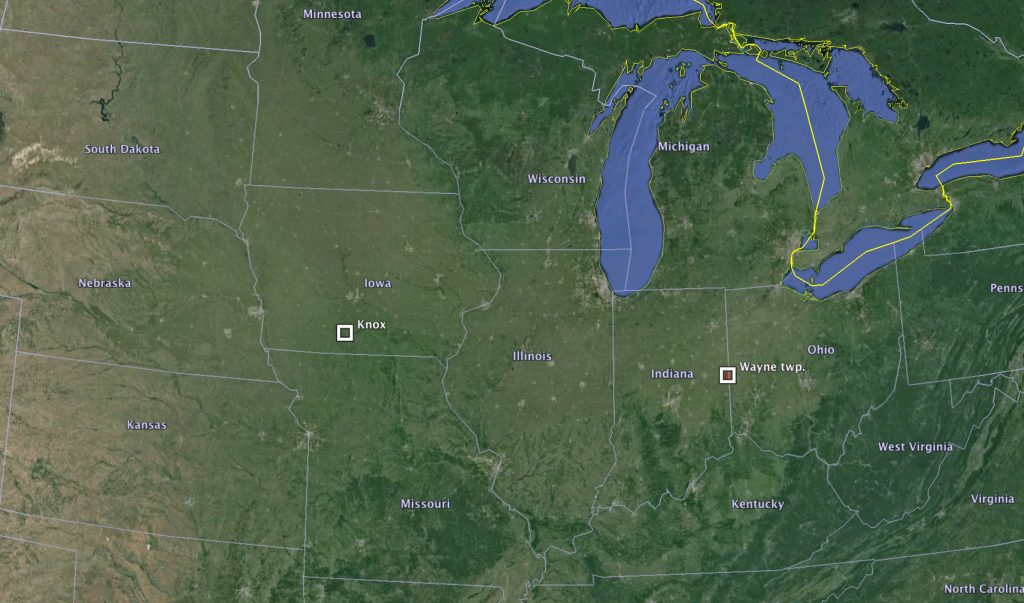 Traveling with John, Rosanna, and their six children were Rosanna’s parents, John McIntosh (ca. 1793–?) and Sarah Polley (ca. 1800–1882). John’s parents had long since passed away, but his older brother Henry and Henry’s family also travelled with them to Knox Township. John’s mother (Elizabeth Suddeth) died when he was just a boy, and his widowed father (Levi Lee) took his five children and moved 160 miles northwest from Hamilton County, Ohio, to Kosciusko County, Indiana. His father remarried twice more and died in 1839, just two years after John and Rosanna married.

John and his brother Henry were farmers, but for a period around the time they migrated to Iowa, they both became wagon makers (see the 1850 census below for John and his family): 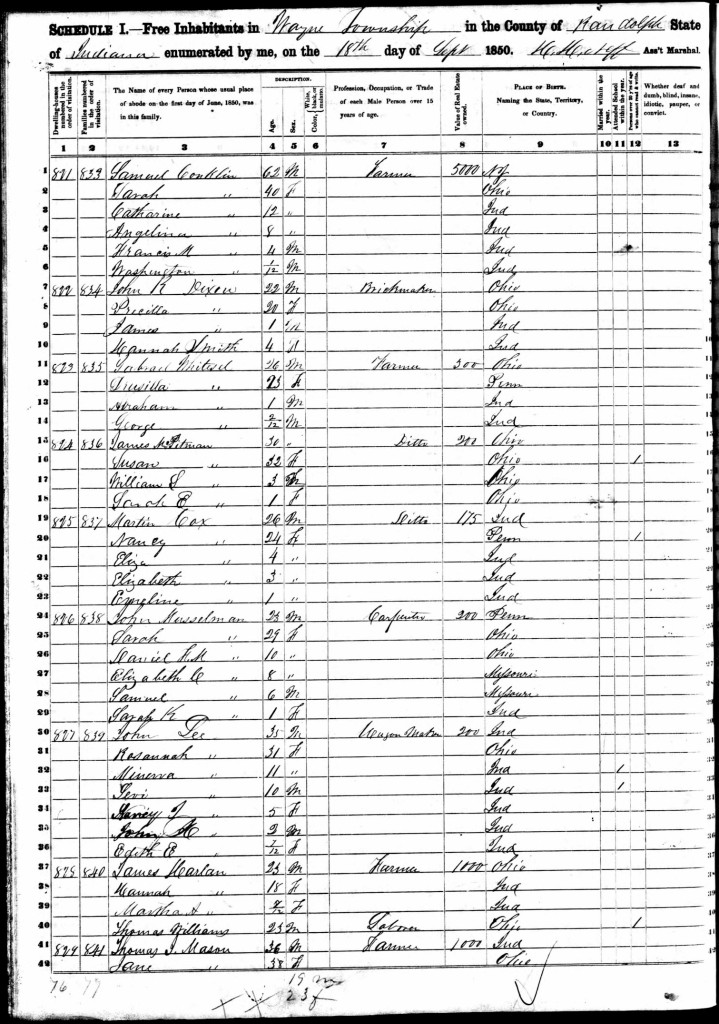 As they were wagon makers, it’s a safe bet that they travelled from Indiana to Iowa via wagons. Time willing, I might try to determine the specific roads they most likely travelled between Indiana and Iowa.

Between 1850 and 1860, the population of Clarke County, Iowa, increased dramatically—from 79 in 1850 to 5,427 in 1860 (a 6,770% increase in population). I have yet to discover the reason for this sudden influx of people (and therefore, hopefully, some insight into why the Lee family may have decided to travel west). Iowa’s statehood came in 1846, so perhaps it was the allure of cheap land that brought them to Iowa? Hopefully a deeper look at land records will shed some light on this. I expect so, as a quick search just now turned up a record of him buying 40 acres in Clarke County, Iowa, on November 3, 1856: 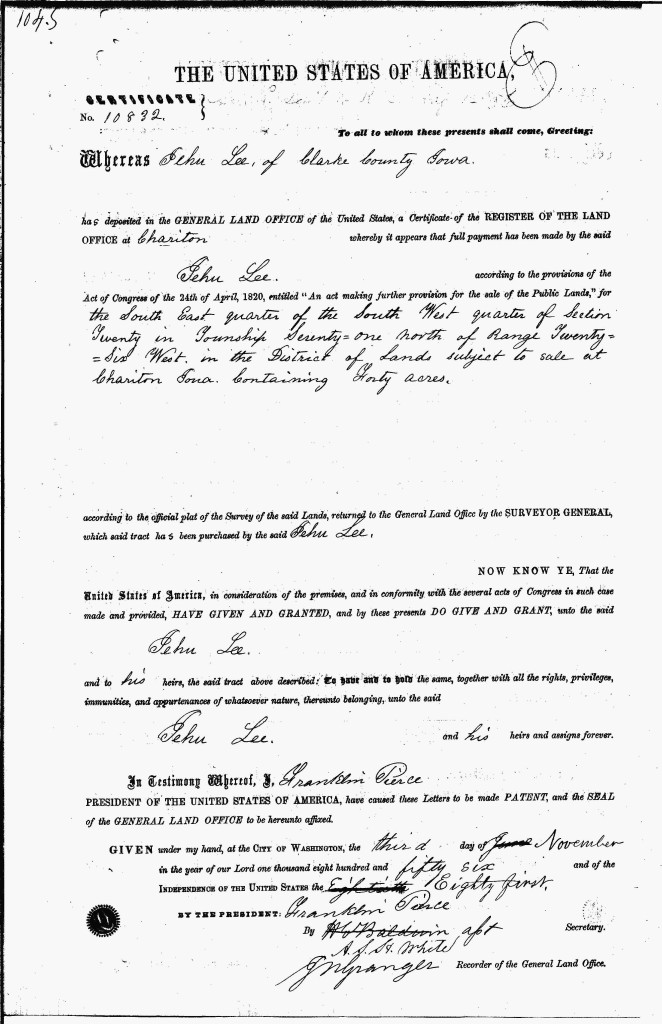 In a future post, I’ll dig deep to see what other land records I can find, and I’ll map out the locations of the parcels to see if I can find any evidence of their original homestead. So far, that approach has been successful about half the time.

Anora’s father wrote his will in June, 1876, a month before he died.

WILL OF JOHN LEE

And as to my worldly estate and possessed or to which I shall be entitled at the time of my deceased I devise bequeath and dispose thereof in the manner following to-wit:

First: My will is that all my just debts and funeral expenses shall by my executor hereinafter named be paid out of my estate as soon after my decease as shall by them be found convenient.

The above heirs to receive no money until after Willis J. Lee become of age. And to Levi Lee I consider I have gave him Two Hundred Dollars in land. John Lee and Rufus Lee Two Hundred a piece in land Joana Lee is to have an equal share with Levi Lee, John Lee and Rufus Lee and to have her share set off as soon as all of the just debts is paid and any money left in hand to pay her. And lastly I do nominate and appoint my said son Levi Lee to be the executor of this my last will and testament.

In testimony whereof I the said John Lee have to this my last Will and Testament of June One thousand Eight Hundred and Seventy Six.

It appears that his wife and all of his living children are mentioned in his will, although the mention of Anora/Anna is a strange one:

I’ve only seen a transcription of this will, so it’s possible that “Beemans” is a spelling error/irregularity in the original, or an error that was introduced when this document was transcribed. If this is the case, then “Beeman” is possibly a rendering of “Horan”. It seems more likely to be a rendering of “Prettyman”, but Anora didn’t marry Francis Prettyman until January 15, 1883, six or seven years after her father wrote his will. Anora married William Horan around 1866, and the 1875 Minnesota census (see below) shows Anora (“Anna”) and William Horan living together with their children Mary A (8 years old), Catherine (5 years old), and John B. (2 years old). It’s not impossible, but it seems pretty unlikely that she would have gotten divorced or become a widow after the disappearance of William Horan (a mystery I’m still looking into) and then married a man named “Beeman” before 1876, only to have him disappear from the historical record immediately thereafter. 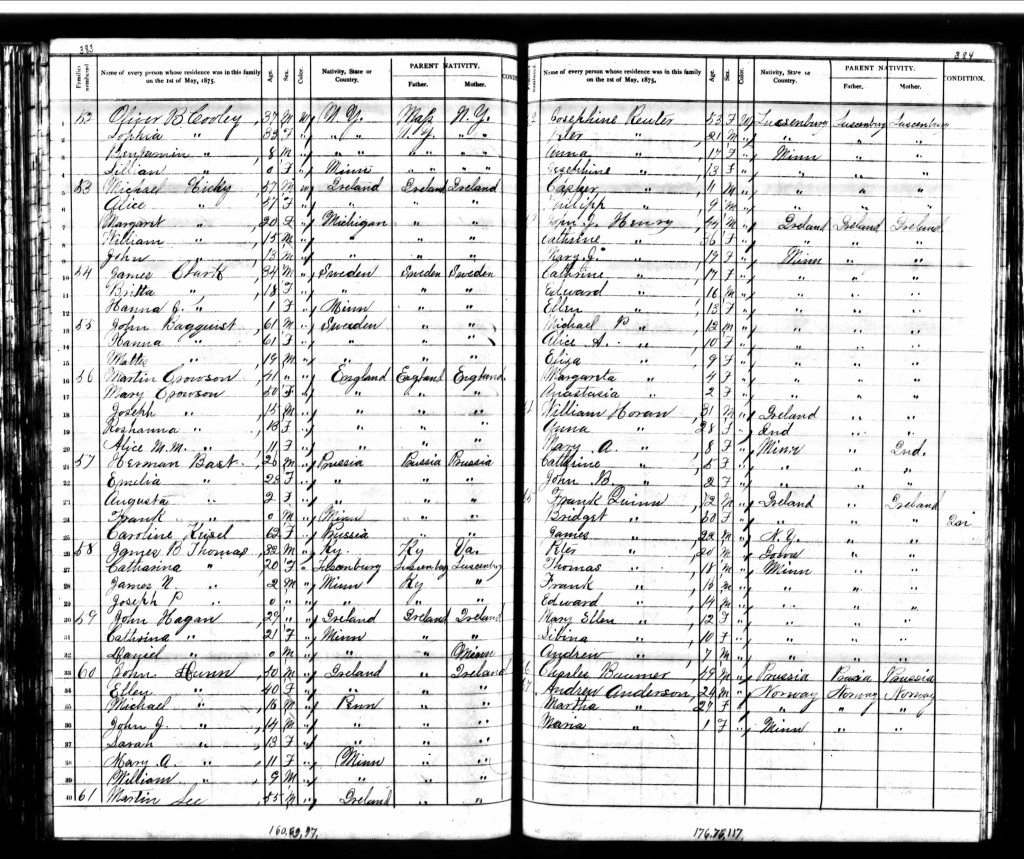 If “Beeman” is a mis-rendering of “Prettyman”, however, then the story becomes rather salacious. Is the mysterious disappearance of William Horan possibly the result of an affair between his wife Anora and and Dr. Francis M. Prettyman? Given what Jerry Prettyman has reported hearing from Sue Prettyman Chezem, I think a salacious story may not be entirely unlikely:

I learned from Sue Chezem that A.W. [Alfred Wharton Prettyman—Francis/Frank Prettyman’s father] may have married Lucy [Lucy Caroline Hasbrouck], his second wife, after Lucy became pregnant with Frank’s child, but Frank wasn’t interested in her.

Lucy Caroline Hasbrouck is Sue’s 2nd-great-grandmother. I wrote to Sue for further details on this story and she had the following to say:

That is what my grandfather [Ray LeRoy Prettyman, who was the half-nephew of Francis Prettyman] told me happened. He knew Francis real well and cleaned out his office when he died. So I have to assume my grandfather was told this by Francis himself. I don’t know this for sure and my grandfather is gone now so can not find out how he knew this.

So there you go. As per usual, some old questions answered, but even more new questions found that need to be investigated. Hopefully finding the original (or a facsimile thereof) of Anora’s father’s will and testament will clear up some of the confusion.

One last tidbit to leave you with: Anora was born around 1852-1853. I originally thought that she was four years older than that, based on her self-reported age on censuses when she was an adult. However, the 1856 Iowa state census (below) clearly shows her as being 4 years old in 1856 and the 1860 federal census (a little further down) show her as being 7 in 1860 (plus, she’s not listed on the 1850 census): 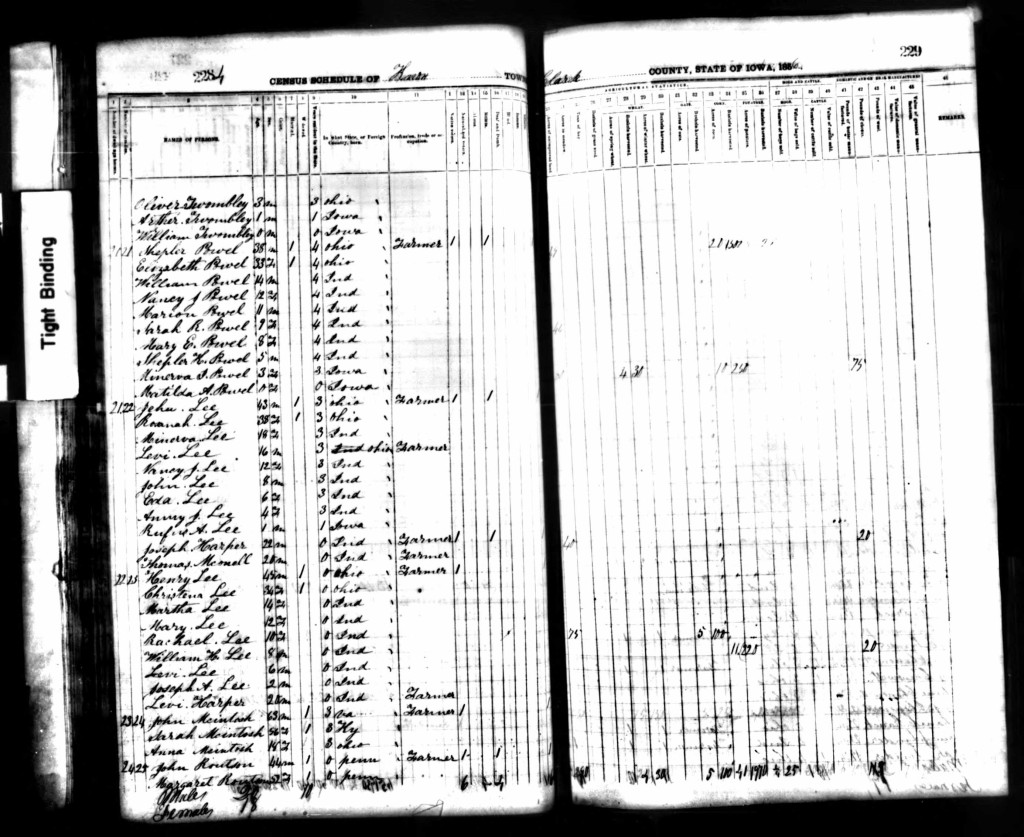 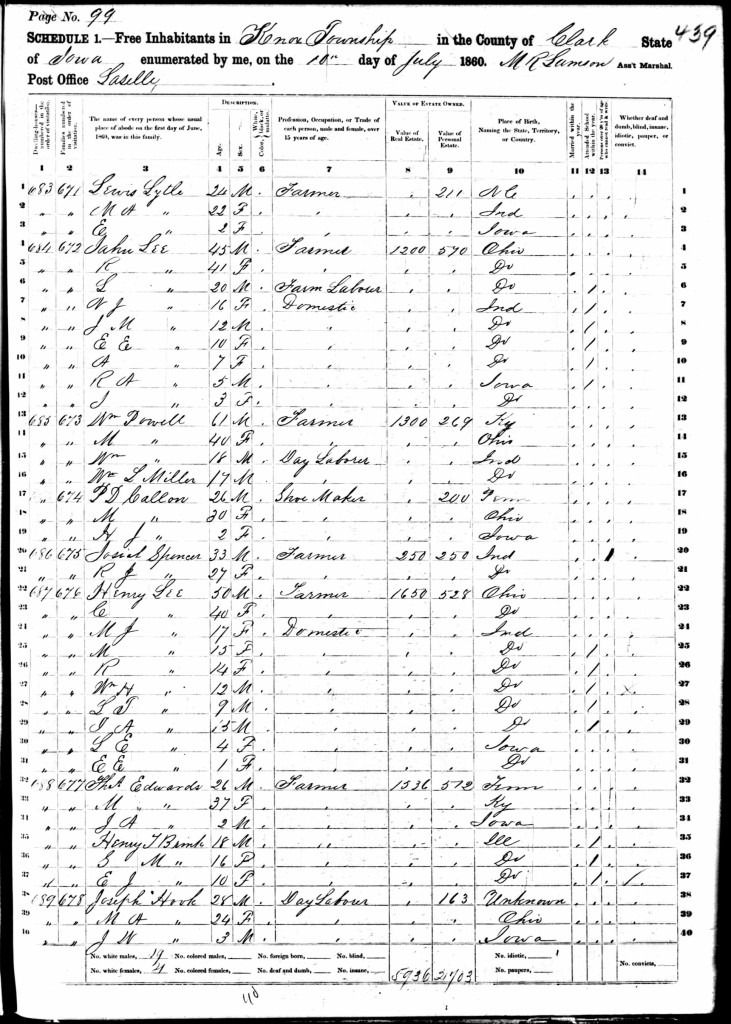 So why is this interesting? Well, Anora’s first child—Mary Ann, my 2nd-great-grandmother—was born on August 7, 1866. Given that Anora was born in 1852 or 1853, she would have been only 13–14 years old at the birth of her first child (and therefore likely only 13 years old when she got pregnant).

I’ll be interested to see just how unusual this was for the time period. I have a strong feeling that this would have been almost as unusual and unexpected 148 years ago as it would be today. In fact, it was probably in response to this that Anora then started reporting her age as 4–5 years older than it really was.

3 thoughts on “Who was Anora Lee Horan Prettyman?”