My 3rd-great-grandfather Chester William “Chet” Eddy (1846–1928) was the contemporary of my 3rd-great-grandfather Col. Joseph Askew (1840–1911), and the two men had much in common. Both left the familiar regions of their childhoods and decided to settle in Wadena County, Minnesota, to be able to homestead and own their own land. Both were among the earliest settlers of Menahga, MN (Joseph built the first framed building in Menahga, the Arlington Hotel, and Chet built the first sawmill in Menahga), and they were both industrious, hard-working men who worked a variety of jobs over their lifetimes (Joseph: miner, land-clearer, farmer, sawyer, hotel proprietor; Chet: gardener, farmer, sawyer, carpenter, grocer, bicycle mechanic).

The lives of the two men became intertwined when Joseph’s son Wilfred married Chet’s daughter Hattie around 1894, presumably in Menahga, MN—the village that Joseph and Chet helped found, and where Wilfred and Hattie most likely met.

Growing up, I heard and read stories about Joseph Askew, and I saw photos of him and his wife, Jane, and their children. I didn’t even know Chester’s name until 2011, and I didn’t see a photo of him until just about a year ago, when I found two photos that had belonged to my great-grandfather, Clyde Askew, and that both appear to have been taken on the same day. Clyde noted on the back of one of the photos that it was the last photo ever taken of Chester (“Last picture of Grandpa Eddy taken at Fair in Sept. 1927”). On the back of the other he had written “Grandpa + Grandma Eddy, Sept. 1927.” 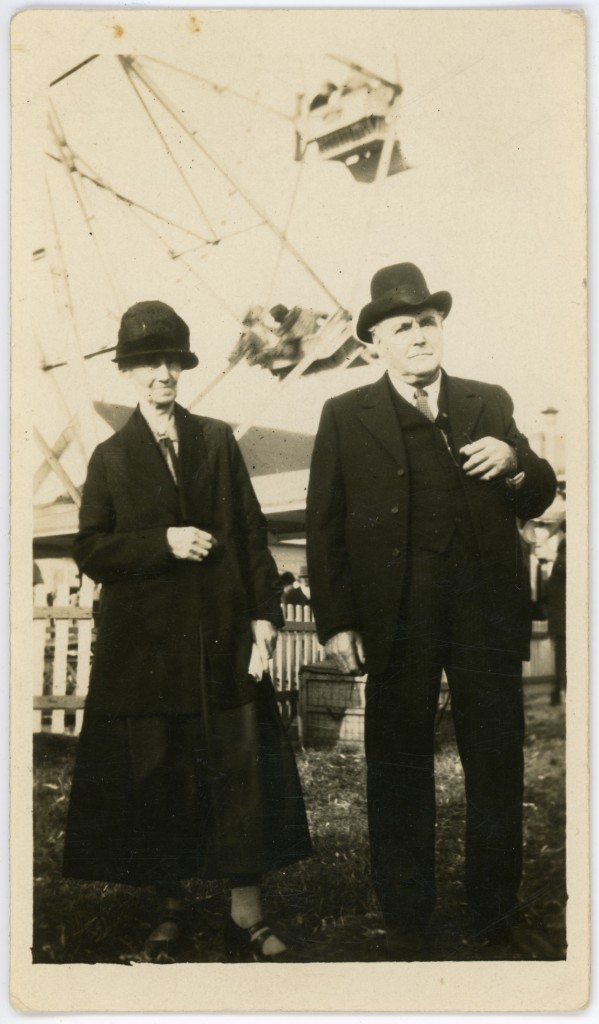 “Last picture of Grandpa Eddy taken at Fair in Sept. 1927” 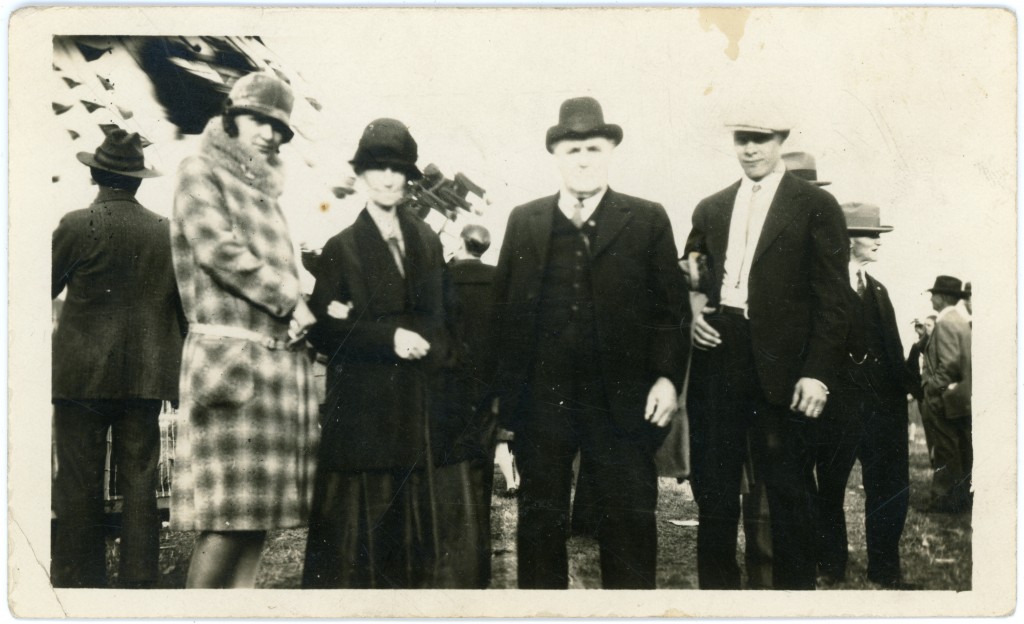 The fair in question appears to be the Western Washington Fair, held in Puyallup from September 19th to 25th. The Tacoma Public Library has a great collection of images of the 1927 fair.

Until today, the two photos above were the only photos I had ever seen of Chester Eddy, and I didn’t know who “Grandma Eddy” was, as Clyde’s grandmother and Chester’s wife, Emma Alice (Comstock) Eddy, died in 1907. Thus “Grandma Eddy” wasn’t his mother’s biological mother—but who was she? I had no record of another marriage for Chester. 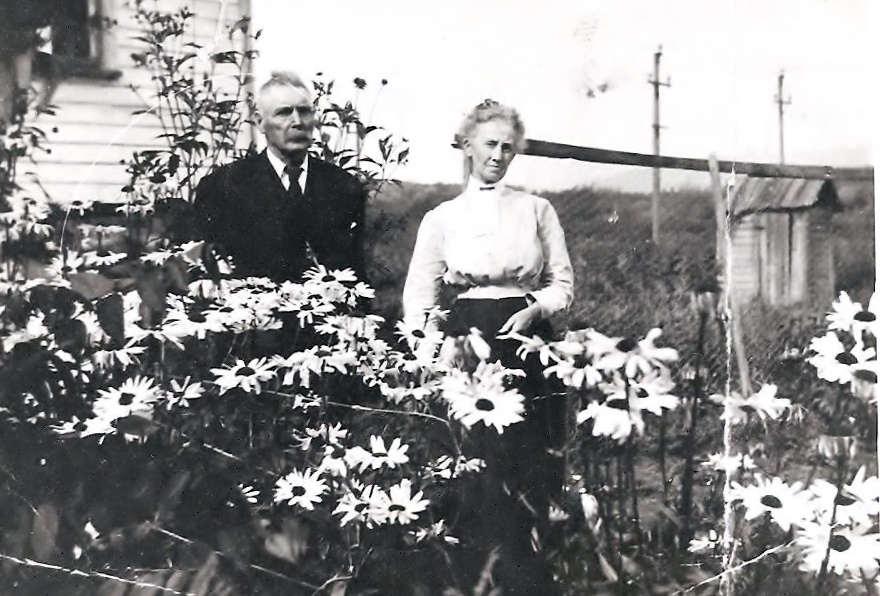 Today I found another photo of Chester, taken about 15–20 years earlier than the other two photos, and I discovered the identity of the mysterious “Grandma Eddy.” The photo comes from fellow Ancestry.com member Freyja2000, who stated that the photo comes “from my grandmother’s photo albums” and that it is “labeled ‘Harriet Chase Eddy 1849-1929 & Mr. Eddy'”.

“Grandma Eddy,” it turns out, is Chester’s second wife, Harriet Ursula Chase. Harriet (or “Hattie”) had been married twice before, and Chet was a widow after the 1907 death of his first wife. The two were married on March 15, 1910, in Spanaway, Washington (see their marriage certificate below).

I’ll talk more about Chester’s earlier history, including his attempt to homestead in Kansas, and his role in the formation of Menahga, in another post. In this post, I want to examine Chester’s later life, when he left his adopted home of Minnesota and moved out west to Washington state.

When and why did Chester leave the Wadena, MN, area and move to Washington state? I do not yet know. On June 2, 1900, Chet and his first wife Emma were living just outside Wadena in Verndale, with three of their four living children—Bert, Mattie and Beulah. Chester is recorded as being a bicycle repairman, and his younger brother Frank Eddy and his family are their immediate next-door neighbors. It’s also noted that by 1900, four of Chester and Emma’s eight children had died.

Both of Chet’s parents, Abel Eddy and Harriet May (Bristol) Eddy, had died within the last 3–4 years in Verndale—Harriet on August 14, 1896, and Abel on December 3, 1897. Perhaps they only stayed in Minnesota as long as they did so that they could take care of his elderly parents? Perhaps he felt less connection to the area once his parents had died?

The records I have for this period of his life are meager. Chet and Emma’s eldest son, George Frank Eddy, died sometime between 1898 and 1900, and their only other son (Bert) went out to work as a drayer in the logging town of Dunsmuir, CA, and died there in November, 1902. Their eldest surviving daughter, Hattie, had moved to Cripple Creek, CO, with her family in the hopes that they’d strike it rich investing in the goldmines in nearby Altman, CO. This left Chet and Emma with only Mattie and Beulah in 1902.

Sometime between 1900 and 1907, Chester and Emma, their children Mattie and Beulah (and maybe Bert, if they left before 1902), and Emma’s mother Sophronia (and probably Emma’s father, Lemuel Comstock, Jr., as well) set out for Washington State. In 1907, Chet’s wife Emma died, leaving him a widow.

Chet married Harriet “Hattie” Ursula Chase on March 15, 1910, and a month later the 1910 census records them living on their own in a house they owned outright in Lake City, Washington. Chester is recorded as being a self-employed homebuilding (“carpenter, houses”). Chet’s mother-in-law from his first marriage, Sophronia Comstock, is apparently living on her own, as she’s listed as such in the 1911 city directory for Tacoma. As she’s noted as being the widow of Lemuel, I suspect that Lemuel was known in Tacoma and, therefore, had probably travelled out to Washington with the rest of the family. On January 6, 1912, Sophronia Comstock died in Tacoma.

In 1920, Chester and Hattie are still living on their own in a house they owned outright, but they’ve moved to Webstone, just a few miles away from their daughter Mattie’s house. On the 1920 census, Chet is recorded as being either a grocer or a grocery wholesaler (his occupation is recorded as “merchant, groceries”).

In September, 1927, as the first two photos above testify, they visited the Western Washington Fair in Puyallup. By then, Chet’s grandchildren—Clyde, Manfred, and Lucille, had grown into adults and gotten married. Manfred and his wife Hope are the man and woman flanking Chet and Hattie in the second photo. Lucille and Vern Fanson also lived in Pierce County, Washington, and Clyde and his wife Gert were back in Wadena, MN, raising their five children. It’s possible that these two photos were taken by Clyde and that he and his family were visiting his grandparents at the time of the fair, but I have no evidence of that yet.

Just three months after the two photos were taken at the fair, Chet died in Sumner, WA, on January 8, 1928. His wife Hattie followed him a little over a year later, dying in Tacoma, WA, on April 6, 1929.

Do you know more about Chester and his family? Do you have other pictures of him and/or his family? If so, please tell me about it in the comments sections below.