Among the items that document our family history is this autograph album that belonged—at least at one time—to Clyde L. Askew (1896–1967). The author(s)/owner(s) of the album are not easy to determine, as entries appear to have been made during at least three different time periods. The first period is probably around the turn of the century, perhaps 1897–1900. At this time, a young child drew in the album.

The second period of the album’s life is comes in 1907, when Clyde gives the book to his aunt Fanny, doing so with an inscription. A possible third period is in 1927, when Ed Young added his name to the album. The fourth period comes decades later (possibly in 1955), after the book had been stored away for some time and then was rediscovered. The (presumed) wife of the finder then writes a letter to Clyde across two of the pages of the book, and another letter across eight additional pages of the book.

In this post, I’ve tried to see what I could learn about the author(s) and the recipient(s) of the notes contained within this wonderful album, but several questions were left unanswered because I don’t have all the facts. I’m hoping that one/some of you will be able to help me with some of these unknowns, so at the end of this post I’ve posed a list of questions that I’m hoping you can help me answer. The album in question is a 4 x 6½ inch hardcover album with a glossy cover that is scratched and stained. On the front cover is a maritime scene of small boats, mostly sailboats. The sailboats appear to be lateen-rigged vessels, or possibly lug sail vessels. This, combined with the observation that the three sailors in the picture are in exotic dress and are wear turbans or possibly fezzes, makes me think this was intended to be a scene from the southern Mediterranean or possibly the Indian Ocean. 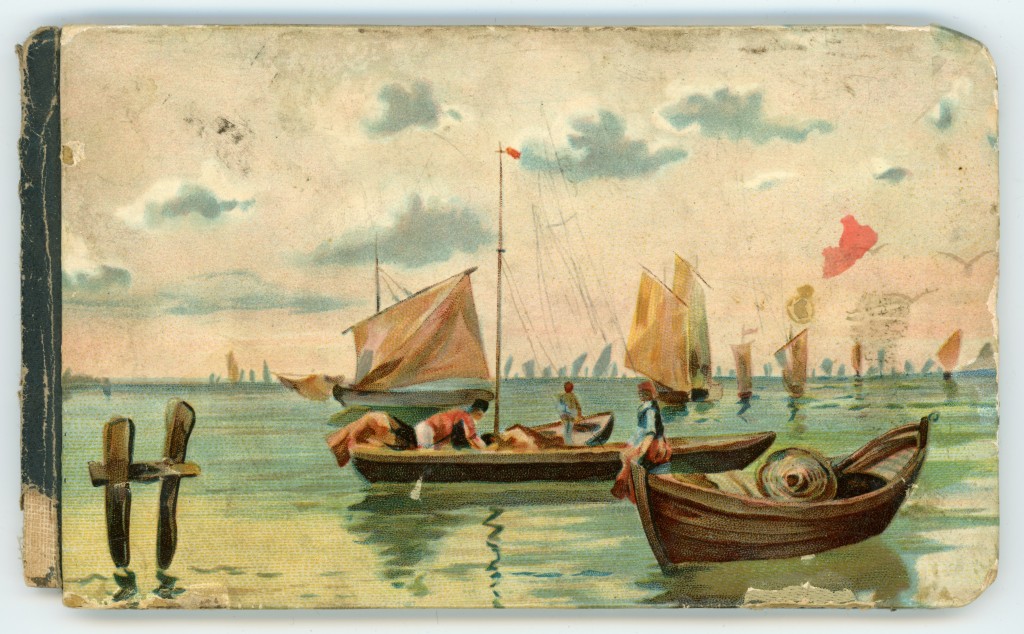 The back cover is a textured black cover, also marked by scratches and pencil marks. 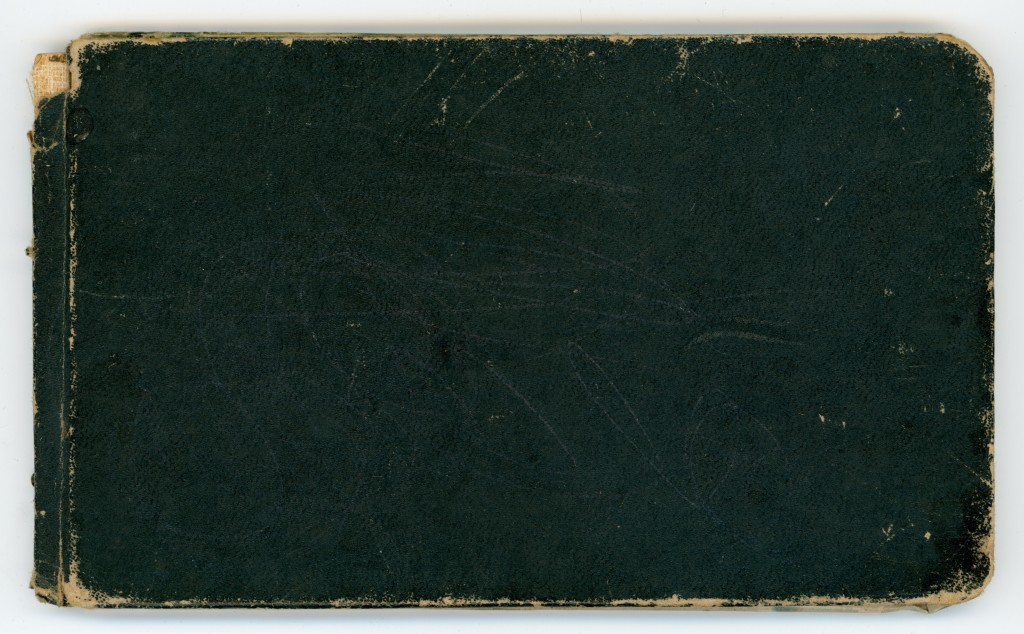 On the inside front cover is an inscription:

At the top right corner of the first page is a notation (possibly that of the store from which the album was purchased):

Spanning the first two spreads is a short note:

Hope you can make this all out

as well as a short letter:

Just how old was you when you rote this

I sure think its real cute

On the last page of the album is a pencilled inscription that apparently represents a third period in the album’s history. The inscription reads:

Was this an inscription by Ed Young himself, or a note written by someone else later in time, recording a something the author wanted to remember? One indication that it was not [all] written by Ed Young is that the “Commercial Hotel” appears to be in a different hand than the name, city, state, and date.

There is some additional writing on this page which was written in blue ballpoint ink. This appears to be another note written on a previously used page by the same person who wrote an eight-page letter elsewhere in the album (discussed below). The handwriting and ink on this page is a close match to that of the longer note.

Just as the grammar and spelling of the longer note give evidence that the author did not make it far in her education, the math on this page also leaves much to be desired. It is interesting to note that there appear to be three dates referenced:

In the middle of the album, a letter was written that spanned eight pages (transcriptions given at the end of these pages): 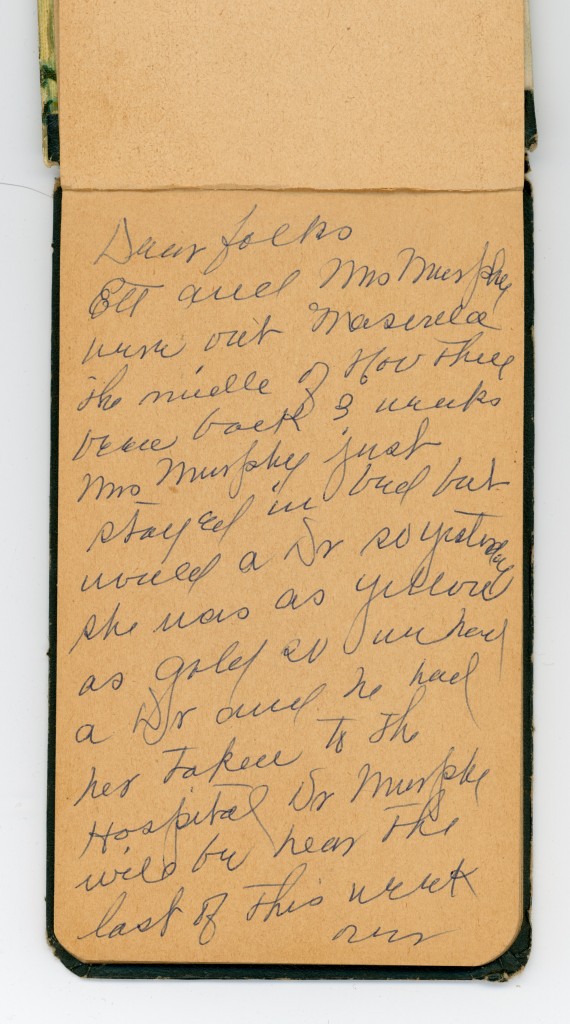 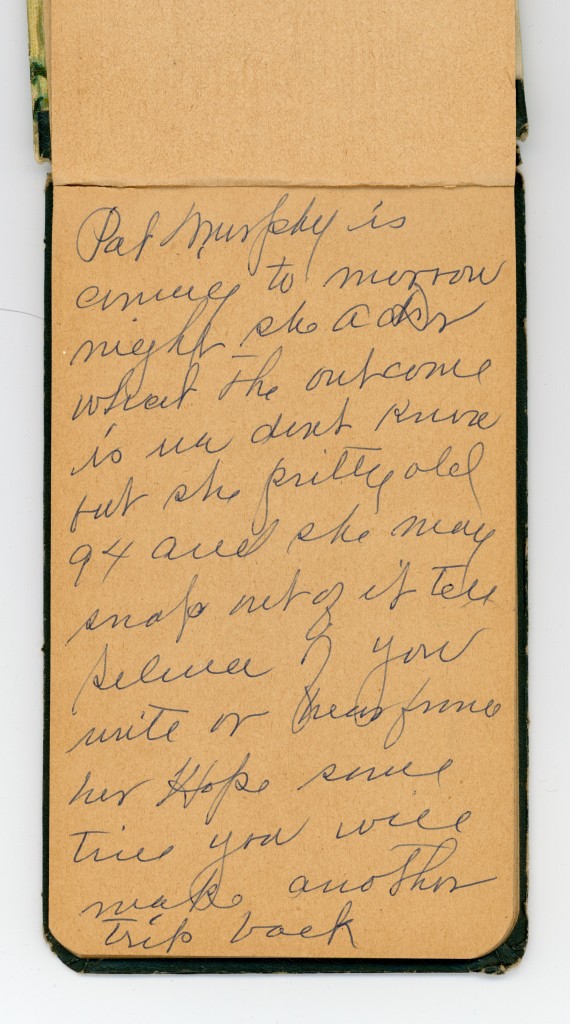 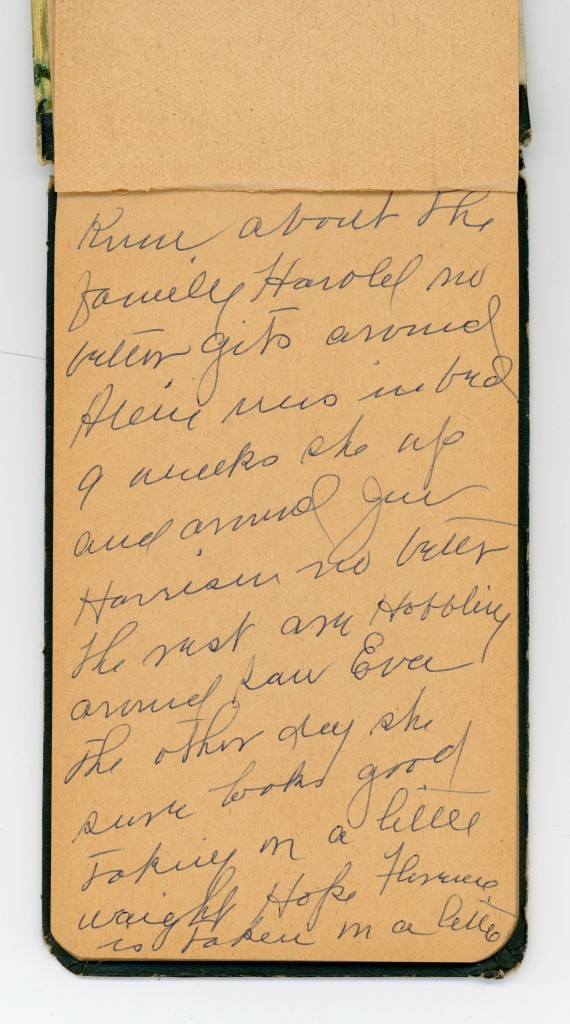 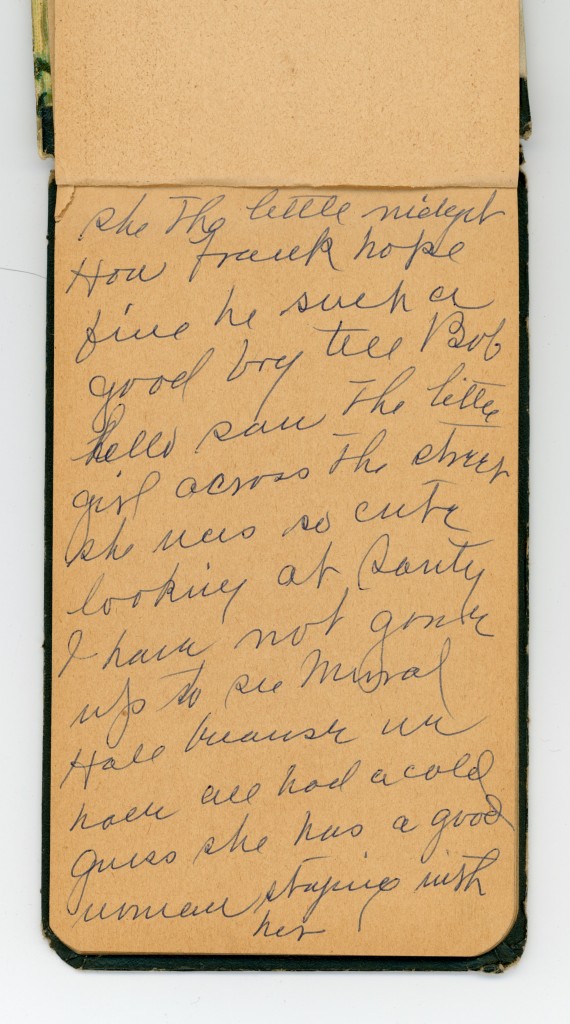 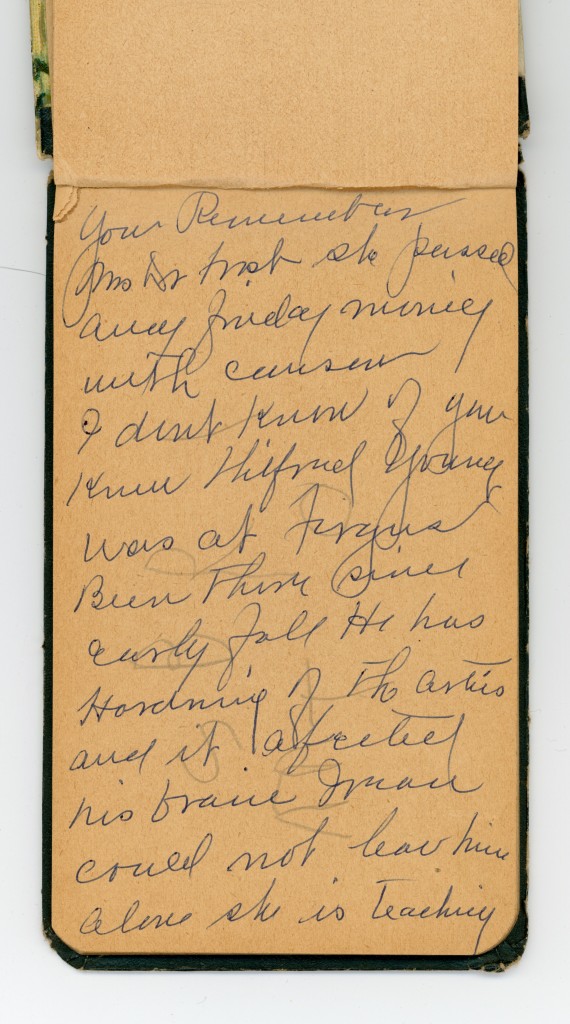 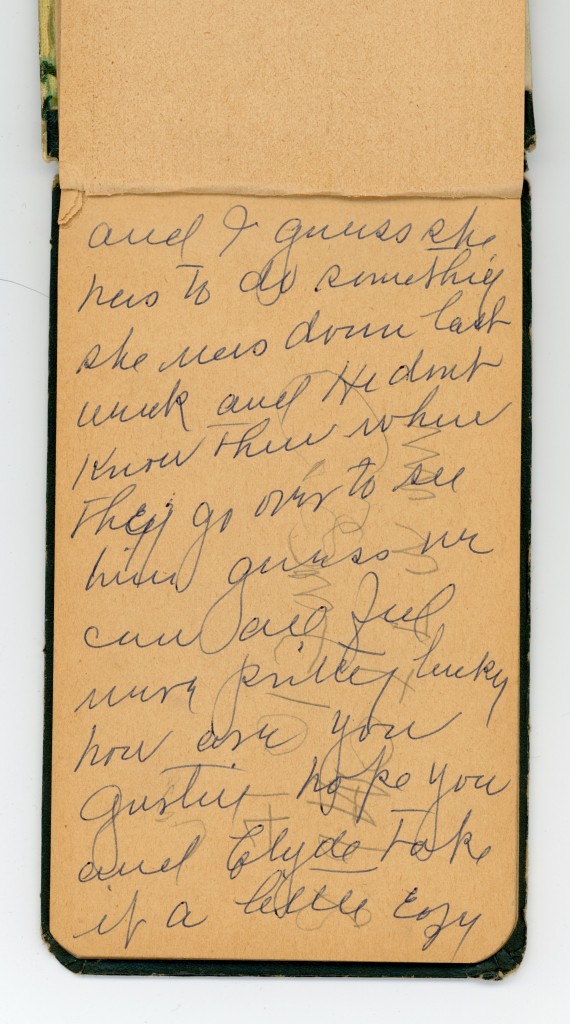 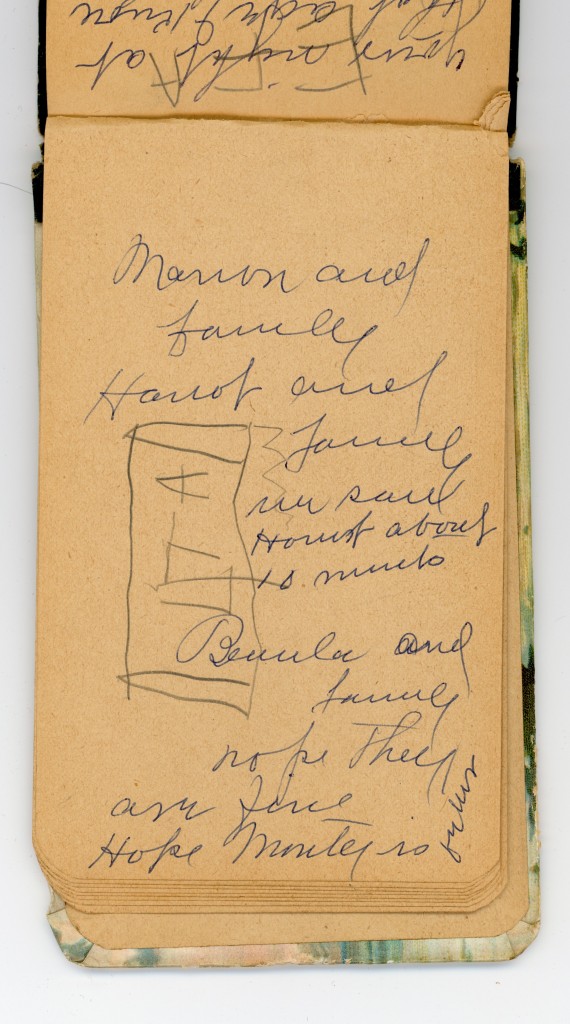 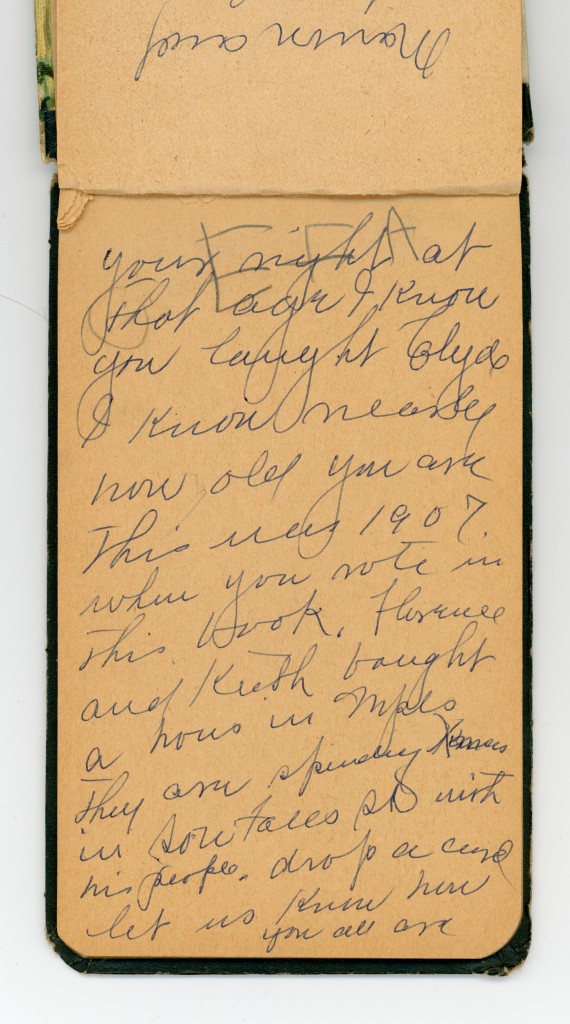 Dear folks [Ett] and Mrs. Murphy were out [Maserela] the midle of Nov They been back 3 weeks Mrs. Murphy just stayed in bed but [would] a Dr so yesterday she was as yellow as gold so we have a Dr and he had her taken to the Hospital Dr Murphy will be hear the last of this week (over)

Pat Murphy is [away? coming?] to morrow night she asks what the outcome is we dont know but she pritty old 94 and she may snap out of it Tell Selma if you write or hear from her Hope some time you will make another trip back

You Remember [Mrs.] [Dr.] [Frost] she passed away friday morning with canser I dont know if you knew Hilfred Young was at Fergus Been there since Early fall He has Hardning of the arties and it afected his brain Irene could not leav him alone she is teaching and I guess she has to do somethig she was down last week and He dont know them where they go over to see him guess we can all feel were pritty lucky how are you Gurtie hope you and Clyde take it a little Eazy

we saw Harriet about 10 minets

hope they are fine

Your right at that age I know you laughs Clyde I know nearly how old you are This was 1907. when you rote in this book. Florence and Keith bought a hous in Mpls they are spending Xmases in Sou Falls SD with his people. drop a card let us know how you all are

Transcription of letter (edited for clarity):

[uncertain words are in bold face; insertions for clarity are in italics]

Etta and Mrs. Murphy were out at Maserela the middle of November. They have been back for three weeks. Mrs. Murphy just stayed in bed but would a doctor.  Yesterday she was as yellow as gold, so we called a doctor and he had her taken to the Hospital. Dr. Murphy [her husband?] will be here at the end of this week.

Pat Murphy is coming tomorrow night. She asks what the outcome is. We don’t know, but she’s pretty old (94) and she may snap out of it. Tell Selma [Askew] if you write or here from her. I hope you will make another trip back some time soon.

[_____] about the family Harold [Mason] is no better, but he gets around. [_____] was in bed for nine weeks, but she’s up and around. Jennie Harrison is doing no better. The rest are hobbling around. I saw Eva [Scott] the other day—she sure looks good. She’s taking on a little weight. I hope Florence has taken on a little—she’s a little midget.

How’s Frank [Askew]? I hope he’s fine. He’s such a good boy. Tell Bob [Askew] “hello.” I saw the little girl across the street; she was so cute looking at Santa. I have not gone up to see Murral Hall because we’ve all had a cold. I guess she has a good woman staying with her.

Do you remember [Mrs.] [Dr.] [Frost]? She passed away Friday morning with cancer. I don’t know if you knew that Wilfred Young was at Fergus Falls, and has been there since early Fall. He has hardening of the arteries and it is affecting his brain. Irene [his wife] could not leave him alone. She is teaching and I guess she has to do something; she was down last week, and he didn’t know her when she went over to see him. I guess we can all feel were pretty lucky. How are you, Gertie? I hope you and Clyde take it a little easy.

You’re right at that age—I know you’ll laugh, Clyde; I know nearly how old you are. It was 1907 when you wrote in this book. Florence and Keith [Gingles] bought a house in Minneapolis; they are spending Christmases in Sioux Falls, SD, with his side of the family. Drop us a card to let us know how you all are doing.

Clues about the author of the letter:

Clues about the date of the letter:

The following images are of some of the other markings in the book, ostensibly by the same child who drew the crude letters on the earlier pages in the album. The first pair of images shows a digital subtraction of the ink which obscured some of the pencil marks.

The next image appears to be a crude attempt at drawing a person’s head and torso (upside down relative to the album): 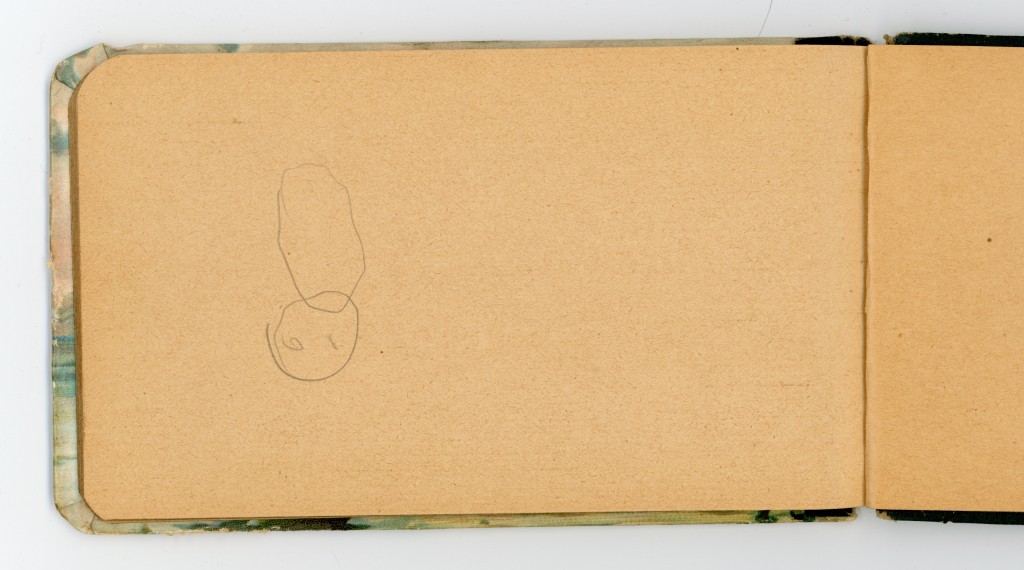 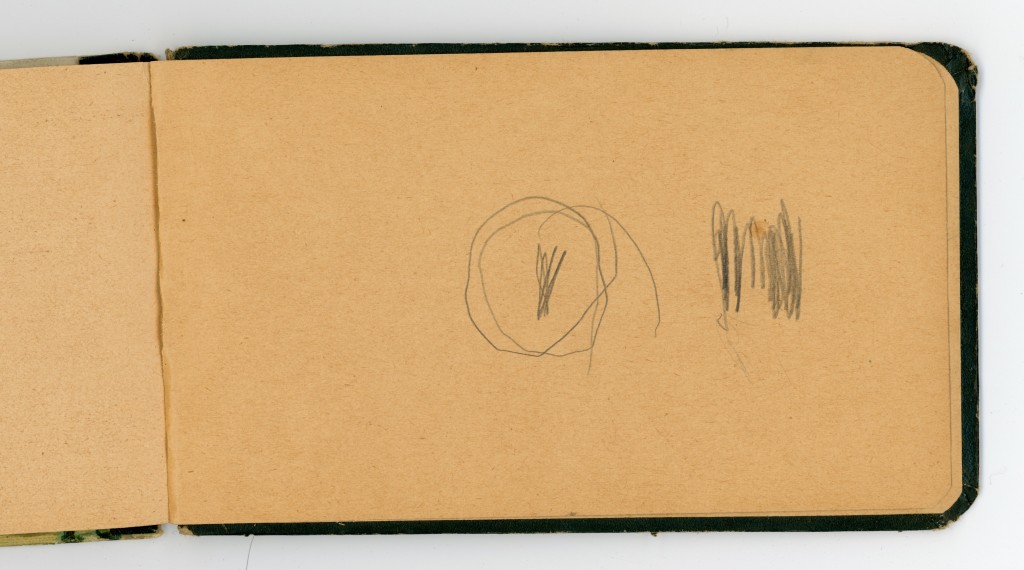 The album appears to have had at least four successive periods of use. In the album’s first period, what appears to have originally been a blank album had many of its pages adorned with rudimentary letters and figures by a child who was perhaps two or three years old. If this child was Clyde himself, then the date for this period would have been around the turn of the century, perhaps 1897–1900. Was the album given to Clyde as a gift, or did he just find the album and decide to decorate it, thus making it his?

The second period of the album’s life is attested to by an inscription from Clyde to his aunt Fannie H. (Askew) Young, dated Christmas day, 1907. Perhaps his aunt Fannie told Clyde how much she admired his drawings, or perhaps Clyde thought that Fannie could use a handy book for recording her thoughts?

The third period is evidenced by an inscription on the final page of the album: “Edw M. Young, Wadena, Minn, Oct 1[_] 1927, Commercial Hotel”. This may not have been written in 1927, but it was written in a different hand than the other writings in the album, so it may well represent use of the album at a time other than that of the other three periods.

The fourth period came decades later, probably in 1955, after the album had been stored away for some time (possibly in the Commercial Hotel) and was then rediscovered when a man named Bob was looking through boxes. A still-unknown author then wrote a letter to Clyde across two of the pages of the book, and a letter to “Dear Folks” across eight additional pages of the book.

Questions for my readers

If you know the answer(s) to any of these questions, or have any information that may be relevant, please do leave a comment below!