Towards the end of her life, my father’s mother, Dorothy Ruth McMurry Black, dropped a bombshell on me.  She told me she had accidentally killed her first husband on their honeymoon.  A first husband?  Accidentally killed on their honeymoon?  I was eager to learn more about both of these revelations, but she was clearly very emotional about the incident, and I didn’t want to push her too hard.

Over the years, I managed to get her to tell me a few additional details about her first husband, but both he and the circumstances of his death were topics she did not like to talk about, and so the details remained largely unknown to me.

It turned out that many of the details had been kept from Dorothy as well.  I learned from her that her father, a prominent businessman and Mason, had sheltered his daughter from news of the police investigation and of the subsequent charges filed against her. In fact, as the charges against her were later dropped, she only learned that she had been charged in her first husband’s death late in her life when she found a newspaper clipping that a family friend had put aside.

I knew my grandmother as a no-nonsense, outdoorsy tomboy (who had, oddly, also been a debutante), so when I heard that she had accidentally shot her husband on their honeymoon, across an open field, while both she and her new husband were aiming at a deer, I was a little suspicious. Experienced hunters would never position themselves directly opposite each other with their prey between them, forcing them to fire in the direction of their partner when shooting at the prey. Was this perhaps not an accident? If so, what would have led her to that point?

I once saw a clipping from an Olympia, WA, newspaper, about the incident (the one that the family friend saved and gave to Dorothy in her later years), but have not been able to locate that clipping yet. What I did find recently, in an online archive of newpapers that I use (genealogybank.com), is a digitized microfilm version of the Seattle Daily Times, from Wednesday, October 19, 1938—four days after the couple had gotten married.

After reading this story, I no longer suspected that this was anything other than a tragic accident.  I’ll present that article and its transcription for you below. For context, I’ll start with the announcement of her engagement to James Russell Jordan, Jr., and I’ll let you see both the clippings and the whole newspaper pages, as they’re fascinating in their own right. 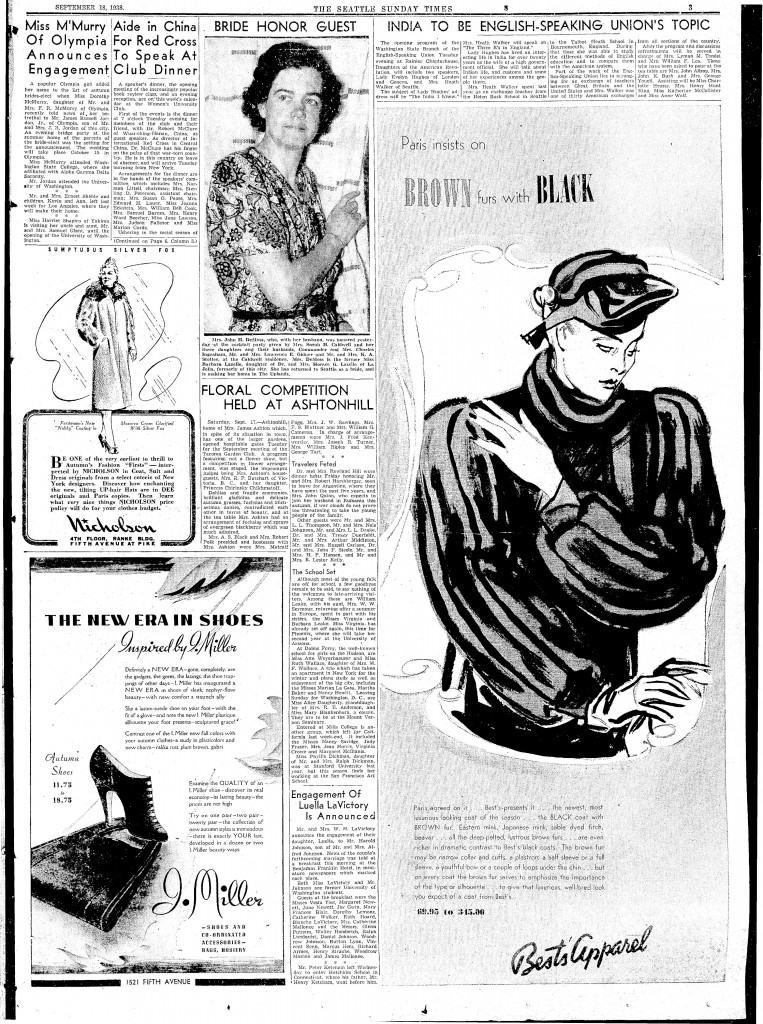 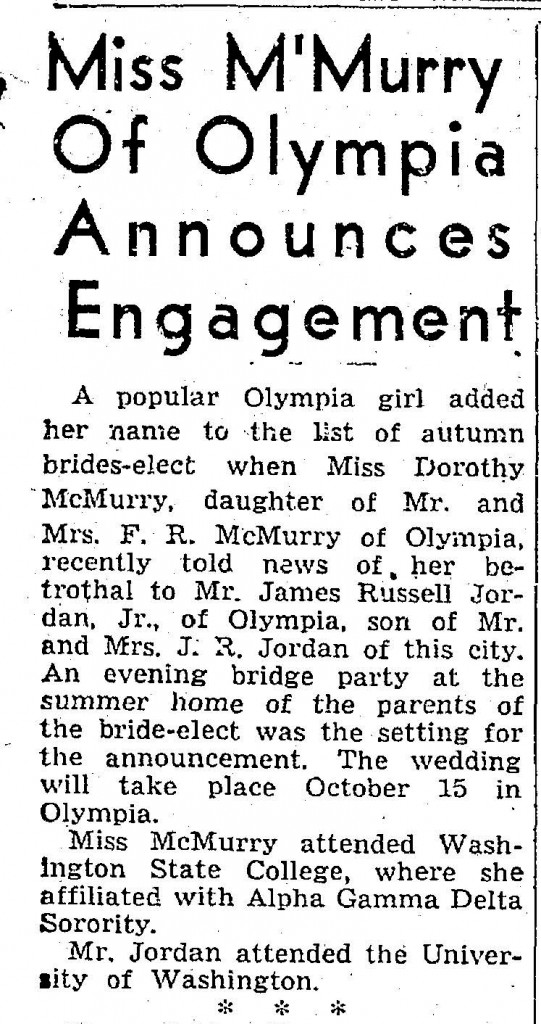 A popular Olympia girl added her name to the list of autumn brides-elect when Miss Dorothy McMurry, daughter of Mr. and Mrs. F. R. McMurry of Olympia, recently told news of her betrothal to Mr. James Russell Jordan, Jr., of Olympia, son of Mr. and Mrs. J. R. Jordan of this city. An evening bridge party at the summer home of the parents of the bride-elect was the setting for the announcement. The wedding will take place October 15 in Olympia. 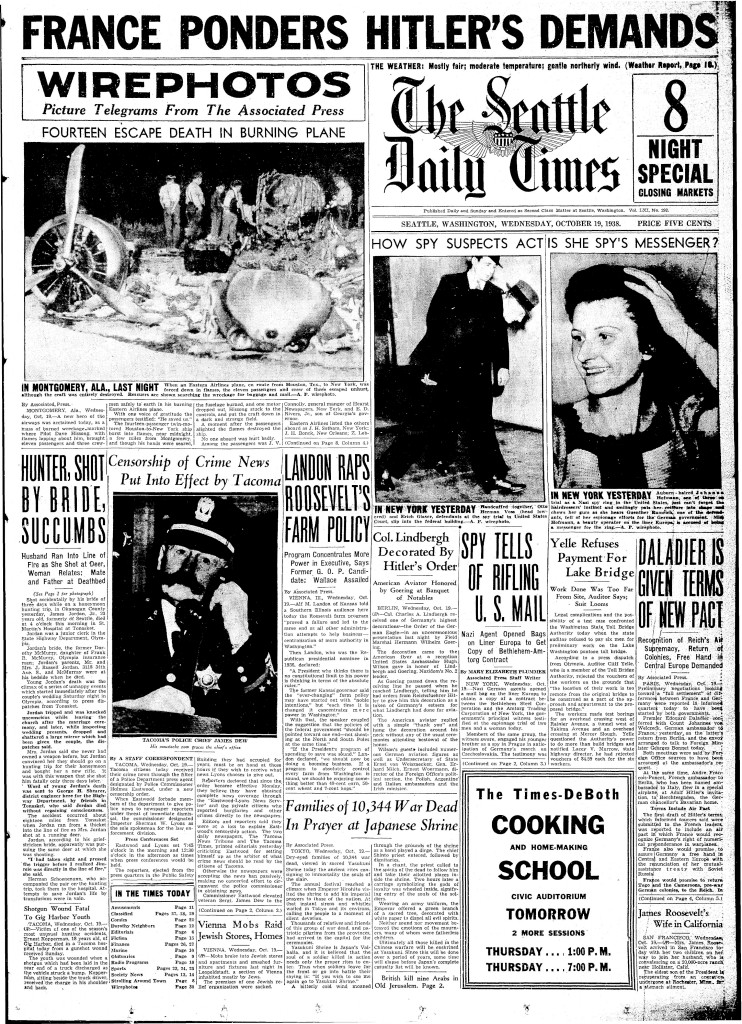 Husband Ran Into Line of Fire as She Shot at Deer, Woman Relates; Mate and Father at Deathbed

Shot accidentally by his bride of three days while on a honeymoon hunting trip in Okanogan County yesterday, James Jordan, Jr., 23 years old, formerly of Seattle, died at 4 o’clock this morning in St. Martin’s Hospital at Tonasket.

Jordan was a junior clerk in the State Highway Department, Olympia.

Young Jordan’s death was the climax of a series of unhappy events which started immediately after the couple’s wedding Saturday night in Olympia, according to press dispatches from Tonasket.

Jordan tripped and was knocked unconscious while leaving the church after the marriage ceremony, and later, while inspecting wedding presents, dropped and shattered a large mirror which had been given the couple, the dispatches said.

Mrs. Jordan said she never had owned a weapon before, but Jordan convinced her they should go on a hunting trip for their honeymoon and bought her a new rifle. It was with this weapon that she shot him fatally only three days later.

Word of young Jordan’s death was sent to George H. Shearer, district engineer here for the Highway Department, by friends in Tonasket, who said Jordan died without regaining consciousness.

The accident occurred about eighteen miles from Tonasket when Jordan ran from a thicket into the line of fire as Mrs. Jordan shot at a running deer.

Jordan, according to his grief-stricken bride, apparently was pursuing the same deer at which she was shooting.

“I had taken sight and pressed the trigger before I realized Jimmie was directly in the line of fire,” she said.

Herman Schoenenann, who accompanied the pair on the hunting trip, took them to the hospital. Attempts to save Jordan’s life by transfusions were in vain. 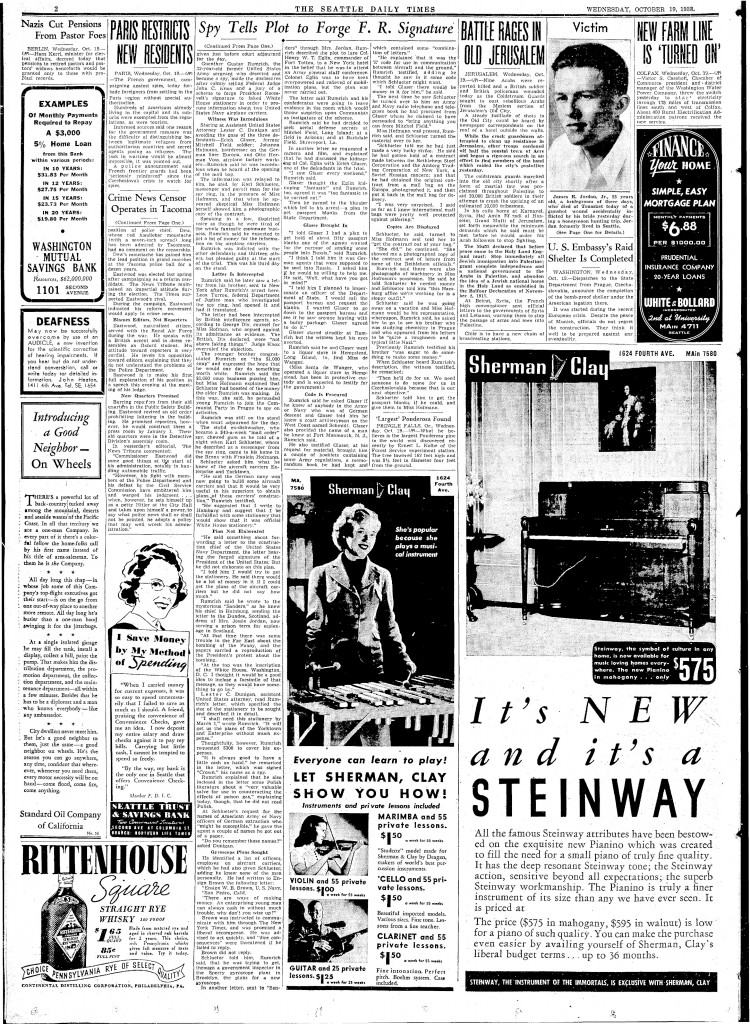 (See Page One for Details)

3 thoughts on “Death by honeymoon”