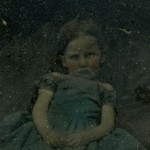 A few years ago, my father drove down from his home in Washington state with several boxes of family memorabilia. In a box with other items that were almost certainly from the house of Frank Black and Catalina (Edel) Black, I found a cased image of a haunting young girl. As I’m currently reading a book about identifying and dating old photographs, I thought I’d use this image of the young girl as a practice case.

Who is this girl? When was the image made? Does her awkward pose hint at this being a post-mortem photograph? I don’t yet know whether I will be able to answer these questions, but this post will record the initial portion of my research on the photo with an aim of providing at least provisional answers to these questions.

The image itself is dark and handtinted, with much of its detail around the girl obscured by darkness of the image. The oval brass matte is in great condition, as is the cover glass and the preserver (the metallic edging that holds the glass, matte, and image together). There is a fair amount of dust trapped in the space between the cover glass and the image. The front of the preserver is finely detailed, complementing the brass matte. The casing of the image is likewise in very good condition, although there are signs of wear on the back of the case and the paper hinge has long since failed and cleanly separated along the hinge line. 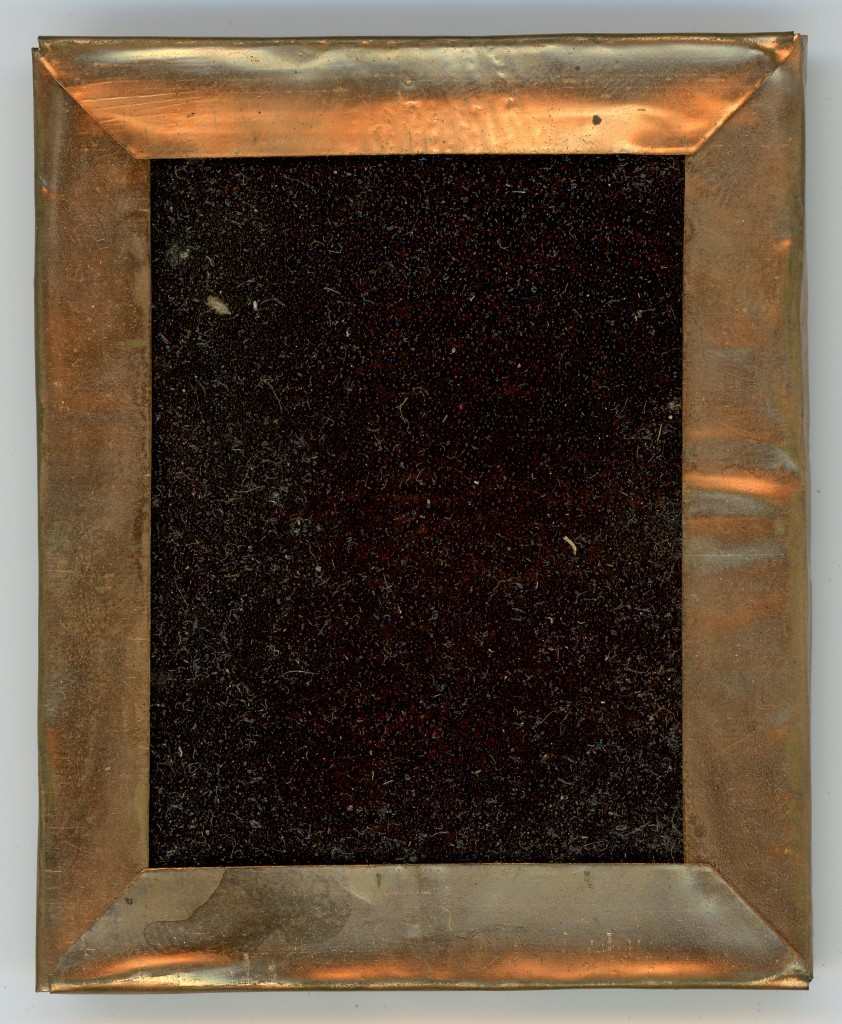 The preserver is in pristine condition, protected by the case and apparently untouched by anyone except the photographer until I carefully removed it today to examine it for clues. The first clue is the type of image this is. The depth of the preserver leaves little room for anything other than the cover glass and the matte, so this not a daguerrotype or an ambrotype, both glass-based image types. The exposed back of the image appears to be metal with a brown hue or patina, covered with a glossy coating, consistent with this being a “tintype”, a common iron-based image type. A quick test with a weak magnet confirmed the ferrous nature of this image, so it does appear to be a tintype. The tintype, cover glass and preserver measure 2.04 inches by 2.52 inches, making it of the size referred to as a “ninth plate.”

The brown coloring I noted on the back of the image is the dark brown (or possibly black that has faded to dark brown) varnish that the photographer used to coat the iron plate to provide a dark background for the image. The image would have been developed on the front side of the varnished iron plate, and then protected by a coat of clear varnish on top of the image. Presumably the blue and red tints were applied to the image before the clear varnish was applied.

Tintypes (also known as ferrotypes or melainotypes) were invented by Hamilton L. Smith of Ohio, and patented in 1856, so that provides an initial oldest possible date for the photo. According to the book I’m reading, tintypes remained in use until the mid-1930s. Another clue to the date of the photo can be inferred from what the back of this tintype doesn’t have—a revenue stamp. The U.S. government required that a revenue stamp be affixed to the back of all images taken between August 1, 1864, and August 1, 1866. 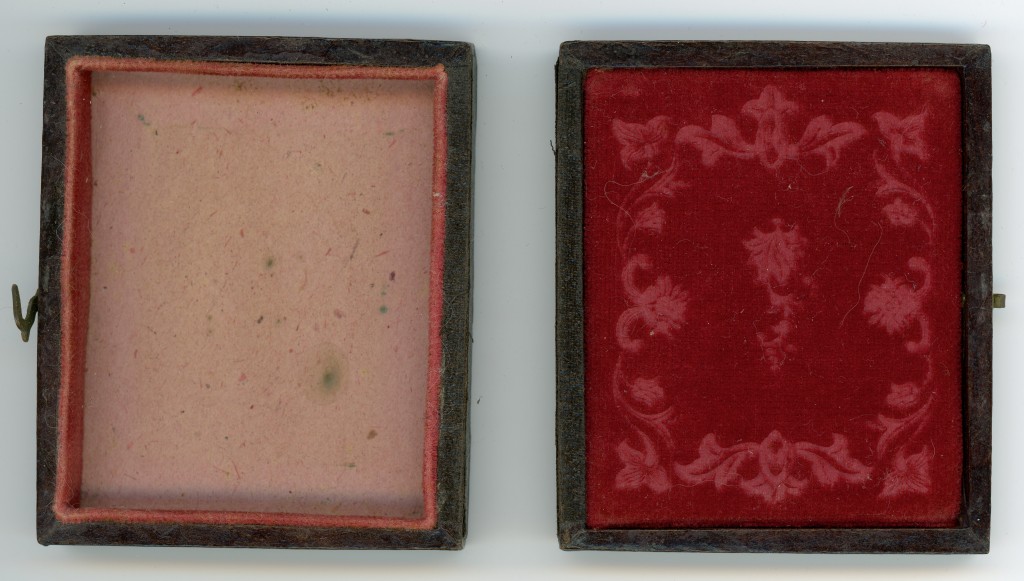 The inside of the case is well-preserved, but is devoid of obvious clues as to the age of the case. The [presumed right] side of the case is lined with red velvet, embossed with a floral motif. The book I’m reading recommends consulting Adele Kenny’s book, Photographic Cases: Victorian Design Sources, 1840–1870, to help date the velvet case liner. The side of the case that held the image is lined with pink-hued rag paper and red velvet siding. The portions of the paper that were in direct contact with the brown-varnished iron plate have been slightly discolored. 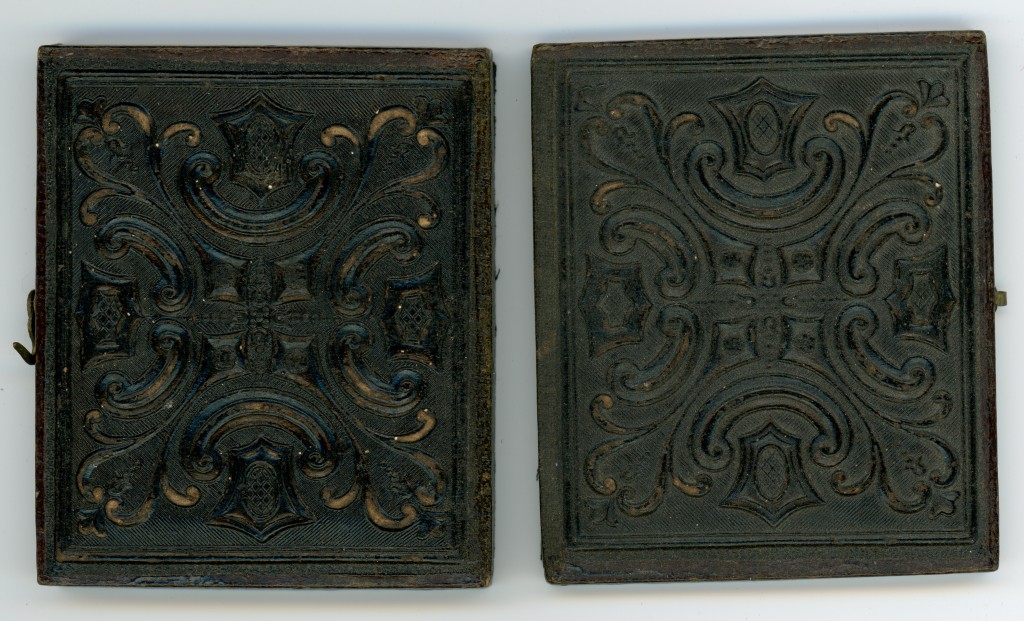 The exterior of the case looks like intricately tooled leather, but does not feel like leather; it feels like thin paper covering a very lightweight infrastructure. Perhaps one of the thermoplastic Union cases I’ve been reading about (patented in 1854), or perhaps it’s an older-style papier-mâché case? The edges of the case are covered with lapped-over paper, which is not what I’d expect on a thermoplastic Union case, and the heyday of papier-mâché cases was in the 1840s, a bit early for a tintype image. Perhaps this is worked leather on wood, after all, just very thin leather on wood, both of which are now old, dry, and lightweight as a result. Hopefully more insight will come as I gain more experience with 19th century photographic cases. In any case, the worn (lighter colored) areas of the outer case, when inspected under magnification, reveal that the original material was light in color, and then was covered with a dark layer of coloring which has now worn off in the highest places.

So far, the techniques and materials used, combined with the lack of a revenue stamp, indicate a very broad date range of 1856–1864 or 1866–mid-1930s. The lack of stars or other patriotic motifs, while far from conclusive, is a hint that the photo was not made during the Civil War. Until I learn more about dating cases and their velvet liners, I may not be able to refine this date any further without examining the internal information of the image itself.

Because the background of the photograph contains no identifiable objects, people, or places, establishing a more specific date for this photo is going to have to depend on clues from the clothing she’s wearing. Below is a version of the image that has been digitally enhanced to make viewing of the girl’s image somewhat easier. The dress she’s wearing has short sleeves that are off the shoulder, and the bottoms of both the sleeves and the dress are decorated with embroidery in a continuous “rolling wave” pattern. The exposed band of light fabric on the girl’s right arm, just below her sleeve, may either be part of an undershirt, chemise or an undersleeve that was inadvertently exposed or, perhaps more likely, a cloth bandage. 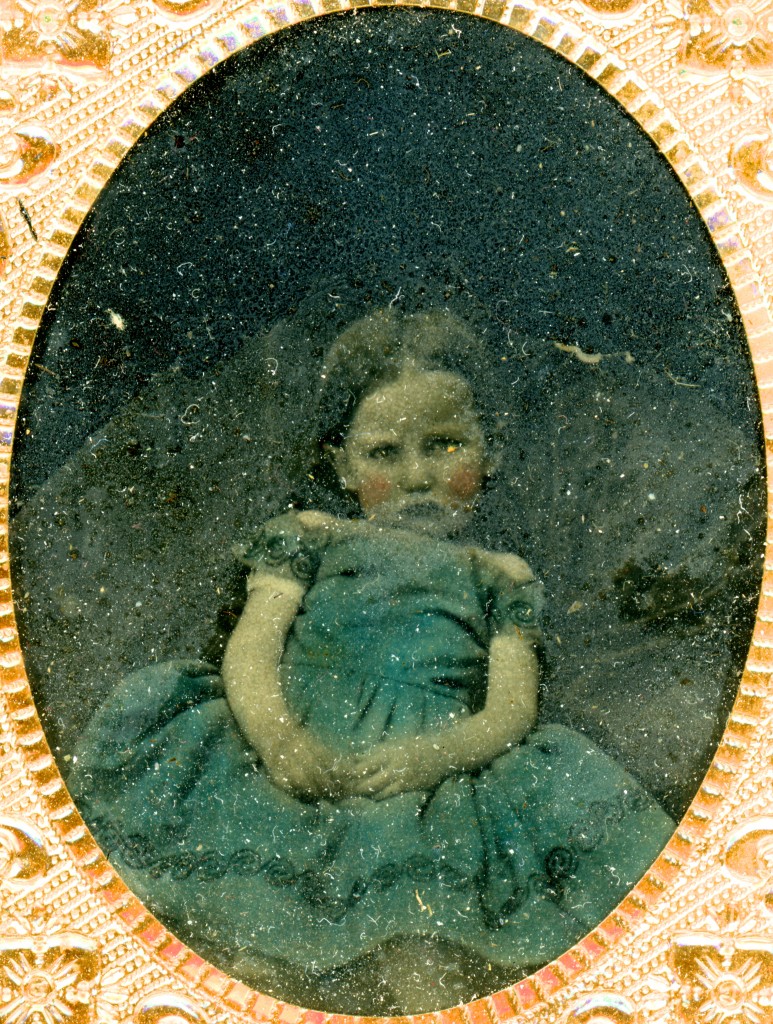 The awkward pose combined with the young age of the subject make me think this is a post-mortem memorial photograph of the girl. This was a common practice following the death of a young family member, as the photo might be the only image the family has of the deceased child. Similar examples can be seen here, here, here, here, and here. Several articles on the Victorian practice of post-mortem photos are available:

Of course, there are probably other, better candidates who have simply not yet made it into my family history database. I’ll take this as inspiration to spend even more time gathering information for Civil-War-era children who died young. Not an easy task, so additional inspiration helps!

So that’s where I’ll end part 1 of this story. The photo, a tintype, probably dates to 1859–1864 or 1866–1869, and is a post-mortem memorial picture of a 2–4-year-old girl who might be Hannah M. Coddington. If Hannah is the mystery girl, then the photo may have come to me through her older brother, my great-great-great-grandfather, George Harrison Coddington.