At the age of 27, in the spring of 1854, my 3rd-great-grandfather, Francis “Frank” Gores (born Franciscus Gores), left his native homeland in the Kingdom of Prussia (or Königreich Preußen) with two of his siblings—Johann, aged 29, and Maria, aged 25. Francis was noted to be a farmer, and his brother Johann was recorded as being a butcher. They were leaving Schönecken, a small market town in Rhenish Prussia (in what is now the Rhineland-Palatinate on the western edge of Germany), home to the Gores family for many generations prior to them.

The village of Schönecken is located in the valley of the Nims river, which meanders through the hilly landscape of the Rhineland-Palatinate. The 400-million-year-old sandstone bedrock that forms the hills produces rich soils for agriculture. The population today is essentially the same as it was in 1854—about 1500 people.

I do not yet know why the three siblings decided to give up their lives in Europe and head to the United States, but one contributing factor may have been the famine that struck much of Europe due to repeated crop failures that began in 1846–1847, most notably potato rot. Land prices were also rising at a pace that exceeded the profitability of farming the land; if a farmer sold his land, however, he could easily afford to relocate his entire family to the United States.

The three Gores siblings traveled to Antwerp, Belgium, to seek a ship that would carry them to the New World. In Antwerp, Francis, Johann and Maria boarded the “Wm Leytin” and set sail for New York. They arrived in New York on May 26, 1854, and their names can be seen at the bottom of the passenger list shown below: 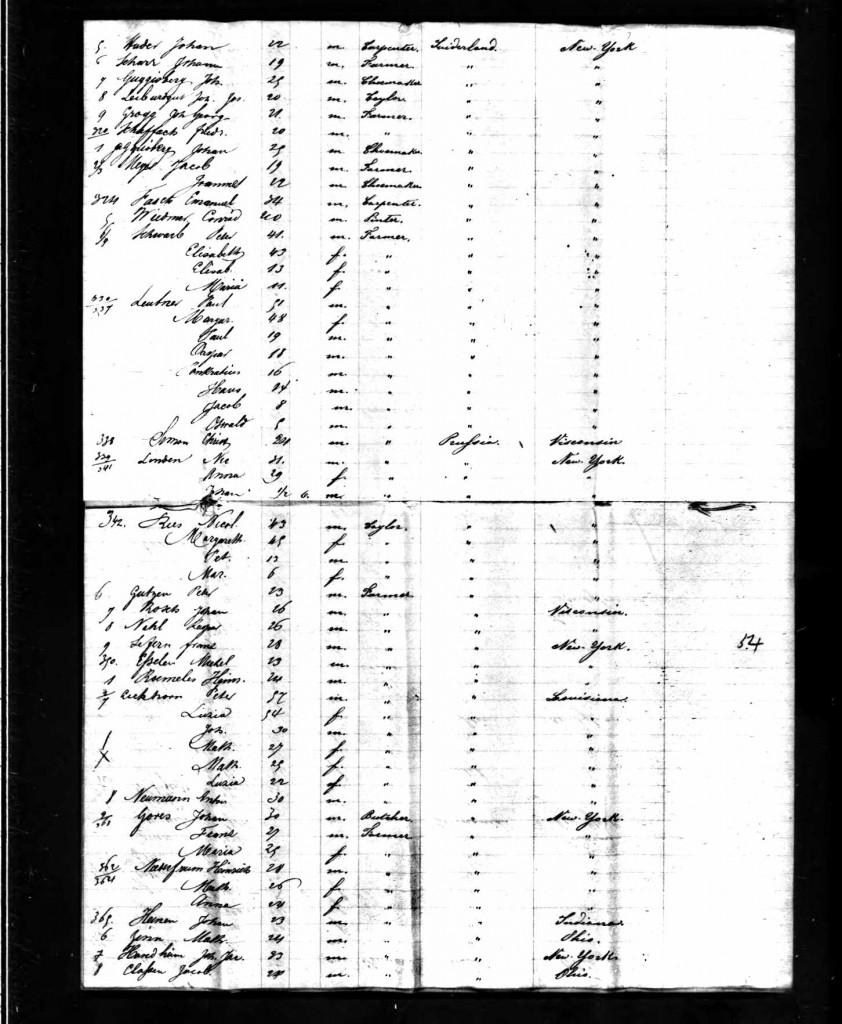 By October 3, 1857, Frank had settled in Douglas County, Minnesota, and was living on his own, making his living as a farmer. His brother brother Johann appears to be living with Frank’s next-door neighbors, but his listed age is off by an even 10 years (a mistake on the census taker’s part, I’d imagine). 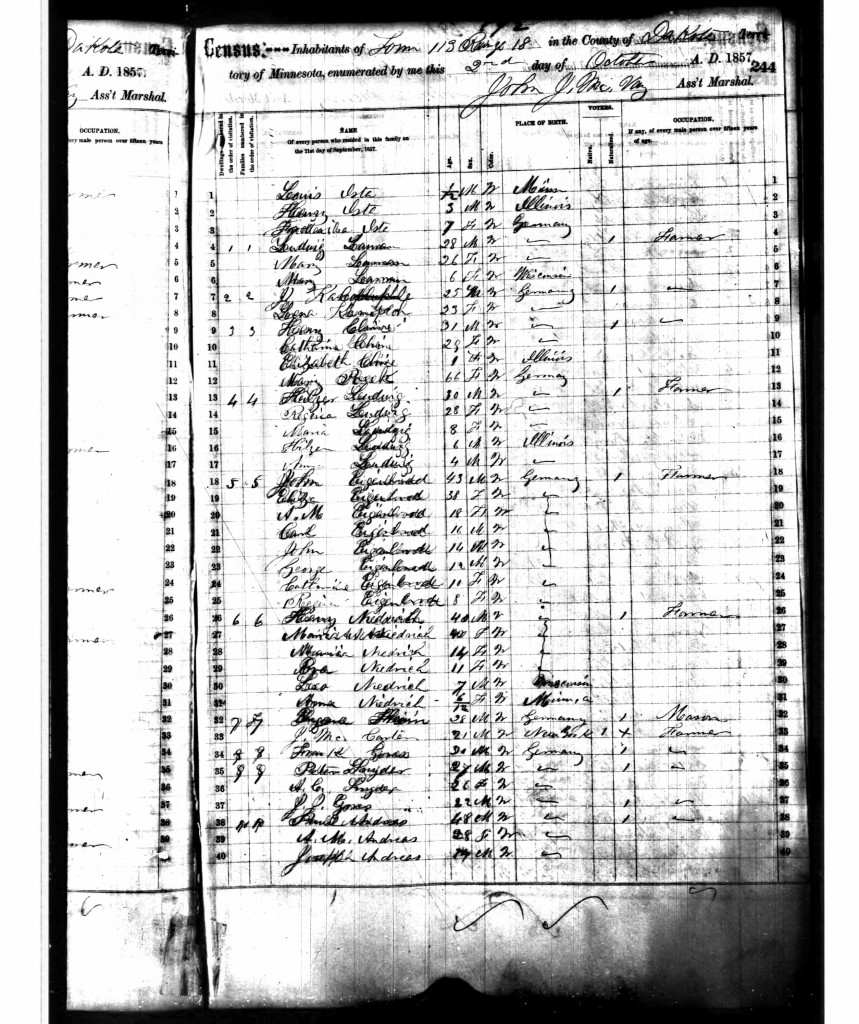 The area where Frank was noted as living is Township 113, Range 18, in Dakota County. This area is shown in blue below: 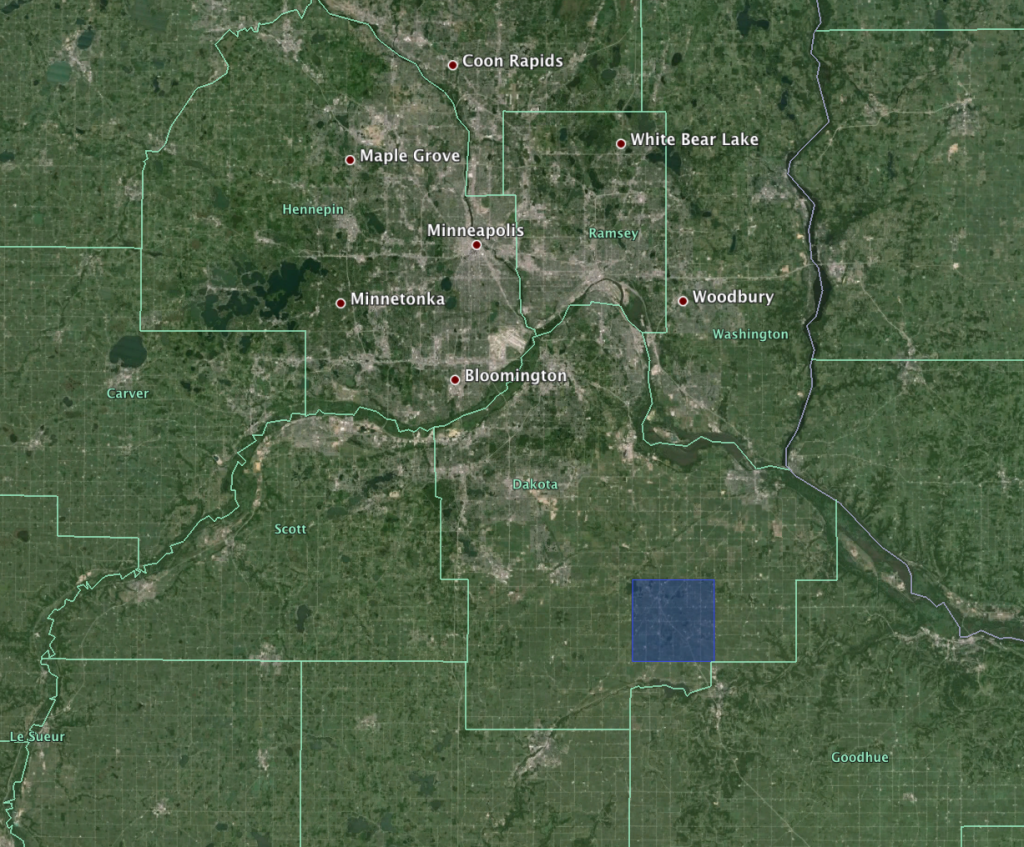 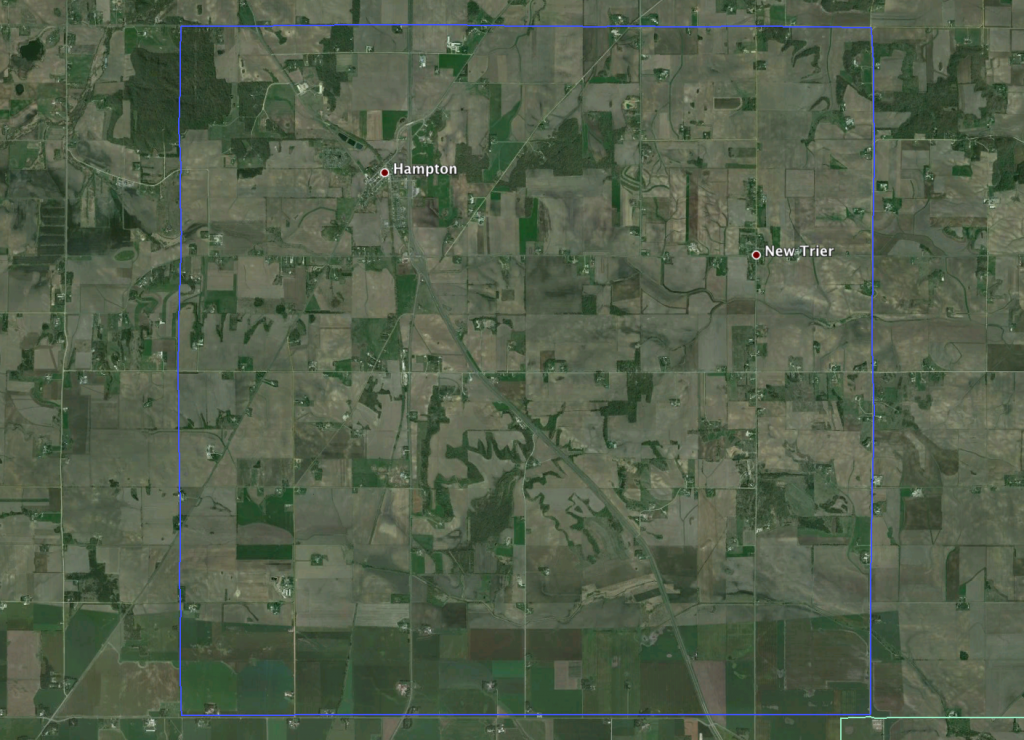 By July 25, 1860, Frank was living in the newly established town of Hampton. Frank had met and married a woman named Margretha (“Maggie”), who was a native of Luxembourg, a country immediately adjacent to Frank’s native Rhineland. Frank and Maggie have a 3-month-old boy named Nicholas, who was almost certainly named after Frank’s father Nicolas. Living with them are two young men who probably worked on Frank’s farm: William Ottoe (14, from Germany) and Christian Jefferson (26, from Prussia). Frank’s farm and home were valued at $800, and his personal effects were estimated to be worth $200. 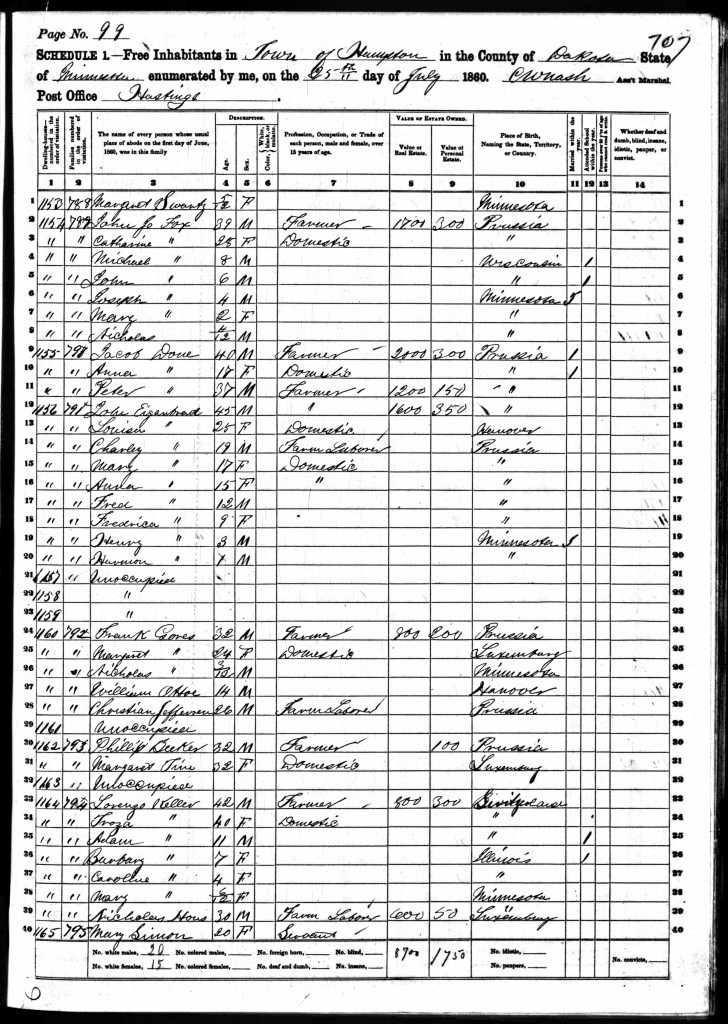 According to the 1881 History of Dakota County and the City of Hastings by J. Fletcher Williams (excerpted here), Francis served as chairman of the board of the Town of Hampton from 1868 to 1873.

By June 10, 1870, Frank’s family and net worth had both grown substantially. Frank and Margaret now had five children at home: Nicholas (10), Barbara (8), Kate (6), Frank (4), and Mary (1). They also had a domestic servant living with them, a woman (or girl; no age given) named Kate Roch, also a native of Prussia. Frank was still farming, and the value of his farm and real estate had grown to $2000, while the value of his personal property was now estimated at $650. The census taker also noted that Margaret could not write (in English, at least), although she could read. 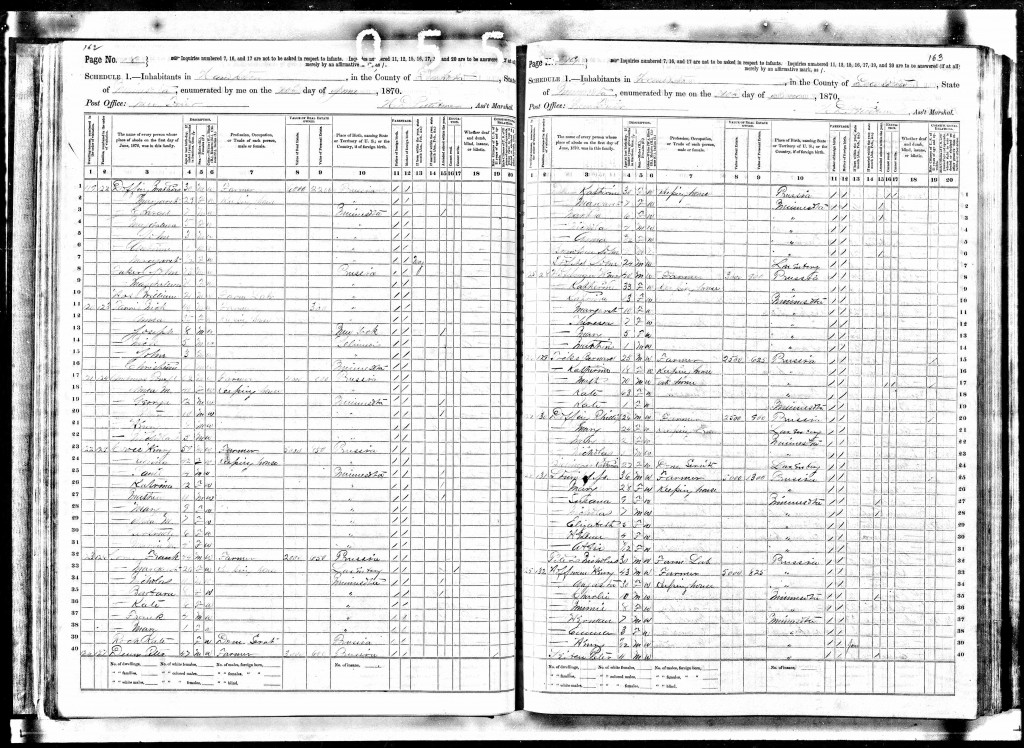 According to the 1881 History of Dakota County and the City of Hastings by J. Fletcher Williams (excerpted here), Francis was recorded as being the first president of the village of New Trier after its incorporation on March 3, 1874. 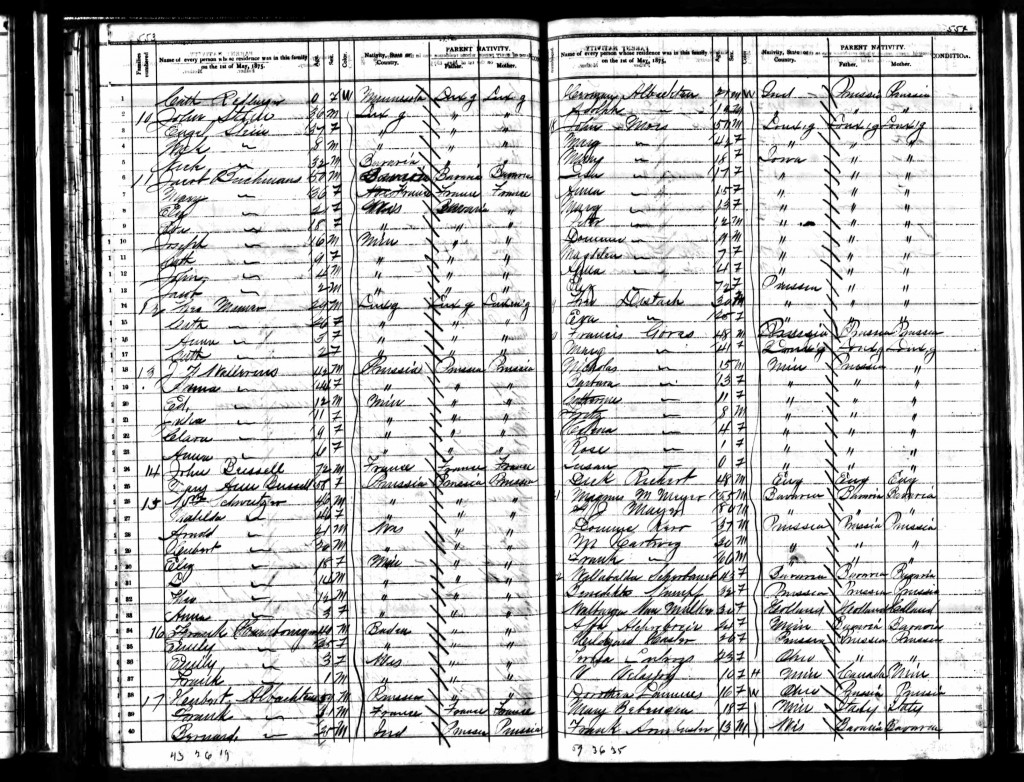 On June 24, 1880, Frank and Margaret were still living in New Trier, apparently on Luxembourger Road. Living with them were their five living children: Nicholas (20), “Barbrey” (18), Frank (14), “Rosey” (7), and Susan (5). Their daughter Kate had died sometime between 1875 and 1880. Their daughter Mary Ann appears to have died during this same period as well. 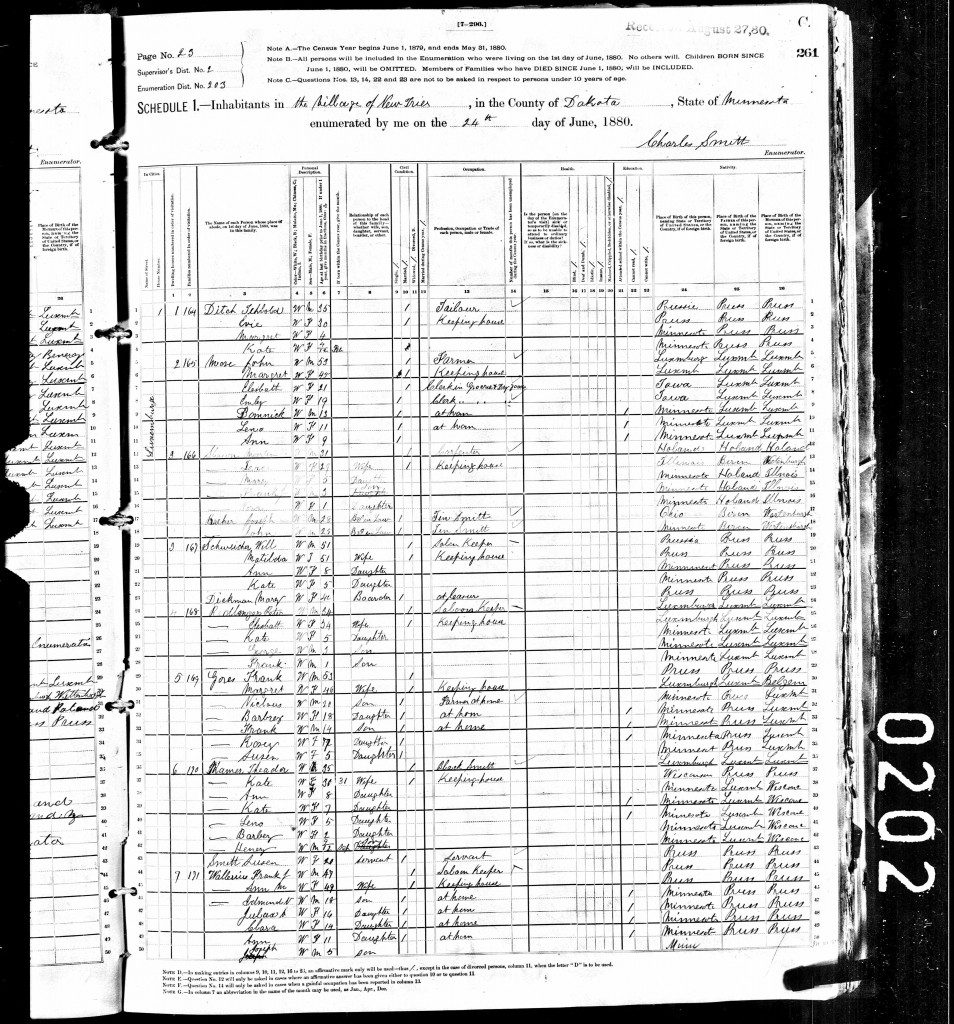 According to the 1881 History of Dakota County and the City of Hastings by J. Fletcher Williams (excerpted here), Francis was one of two general merchants in New Trier in 1881 (along with T. J. Wallerin). Francis was recorded as being president of the village of New Trier in 1881, although it’s unclear whether he served continuously as president from 1874 to 1881. 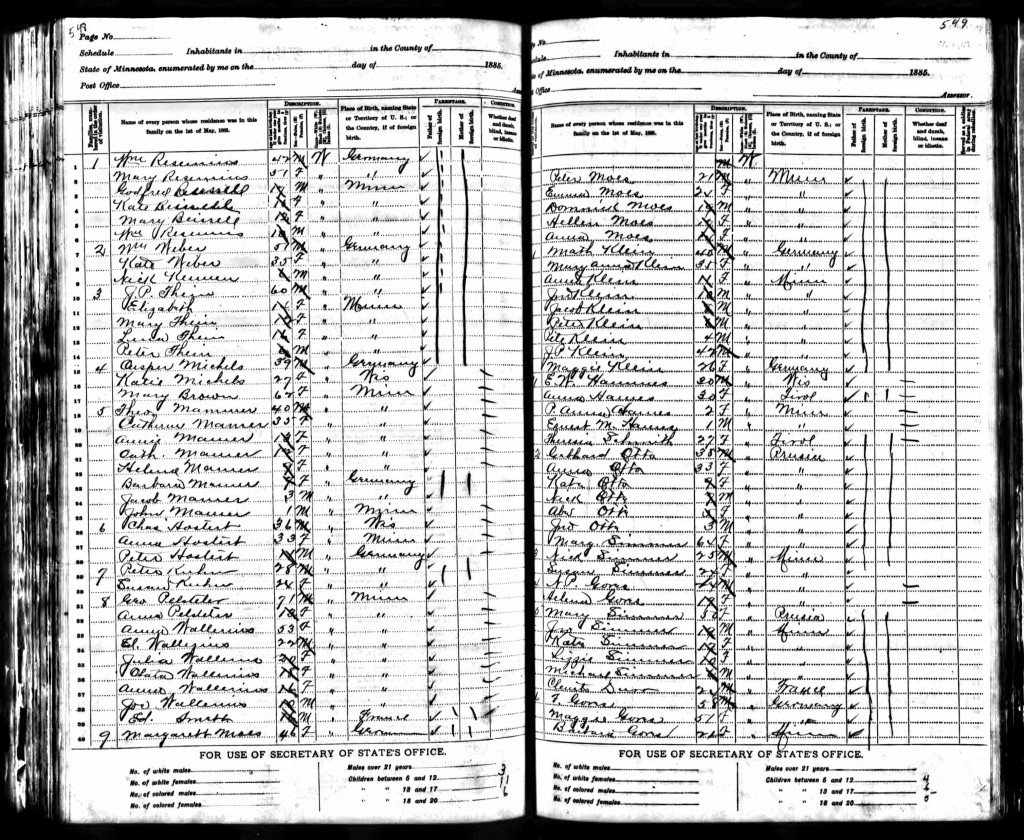 The 1885 census of the Gores family continues on the next page: 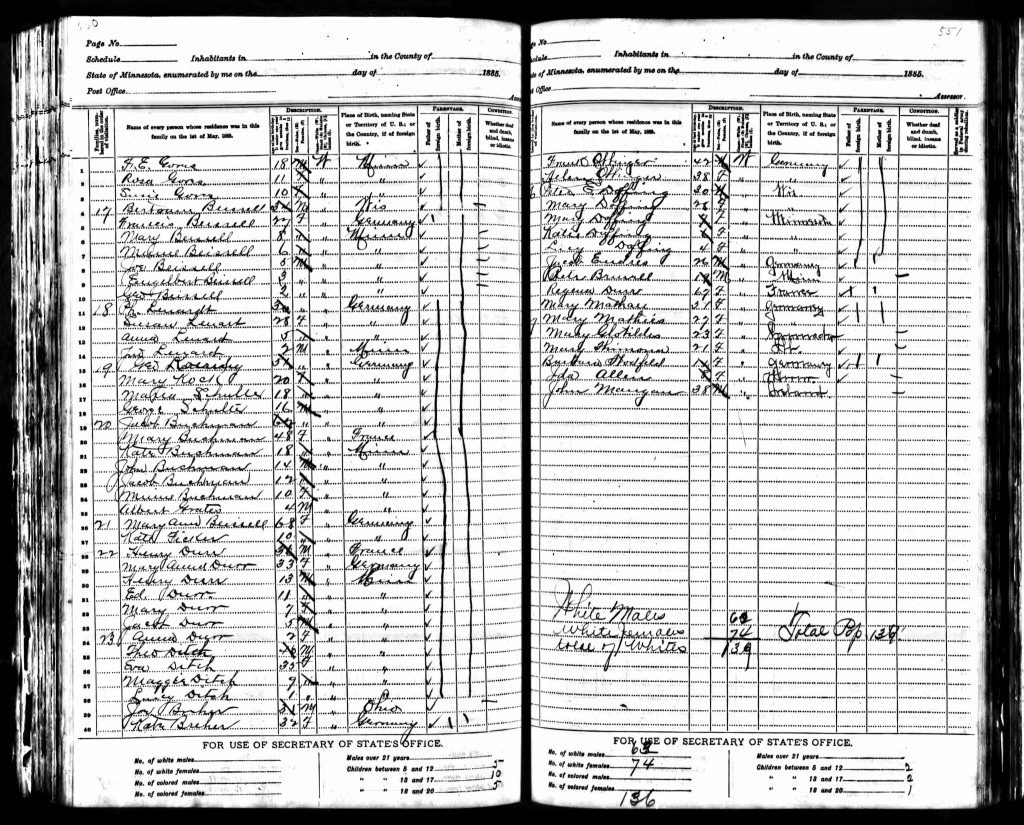 By June 11, 1895, Francis and Margretha have moved to the town of Wadena. Francis’ occupation was listed as “Farmer + capital”, so it appears that Francis had done well enough for himself and his family that he could afford to start investing and lending money (his son would later found the F.E. Gores Mortgage Company, still in business after a century of operation, although no longer in the family).

Two of their children were still living at home: Rose (21) was making a living as a dressmaker, and Susie (20) was working as a milliner. Their daughter Rosa would later take her vows and become a nun, adopting the name Sister Bernarda. Their son F.E. Gores had married Veronika Ewertz in 1886. 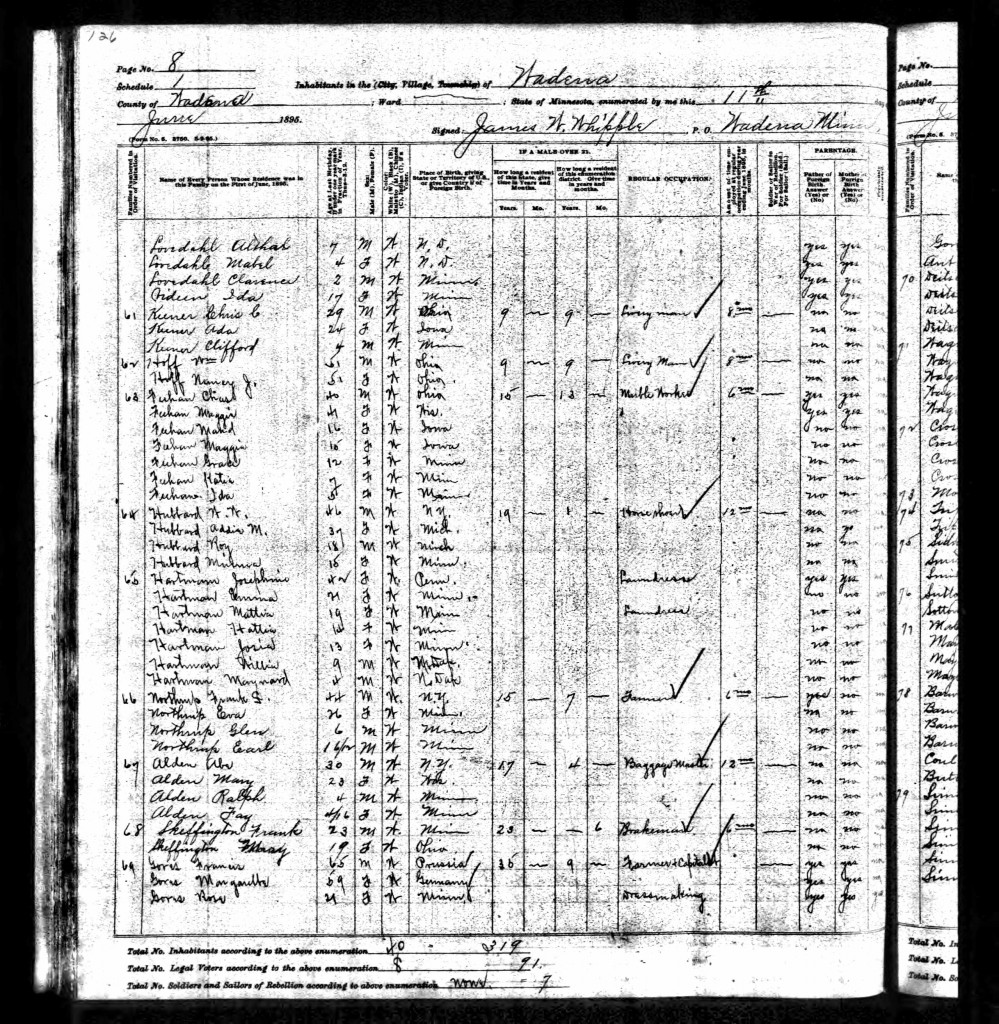 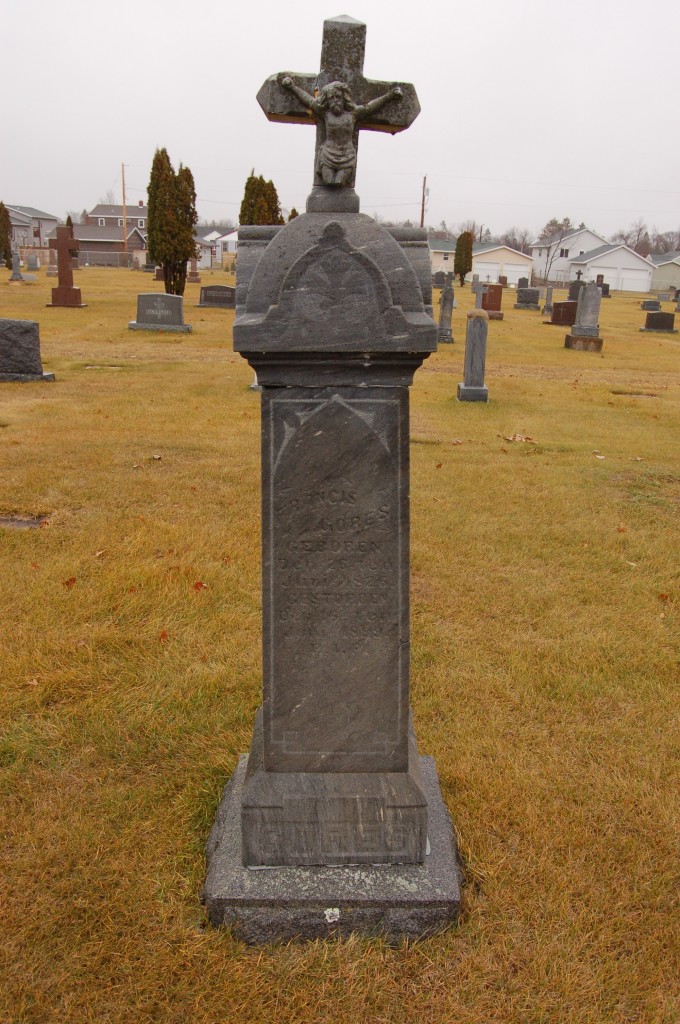 Honoring his Prussian heritage, the inscription on his monument is in German. It reads: 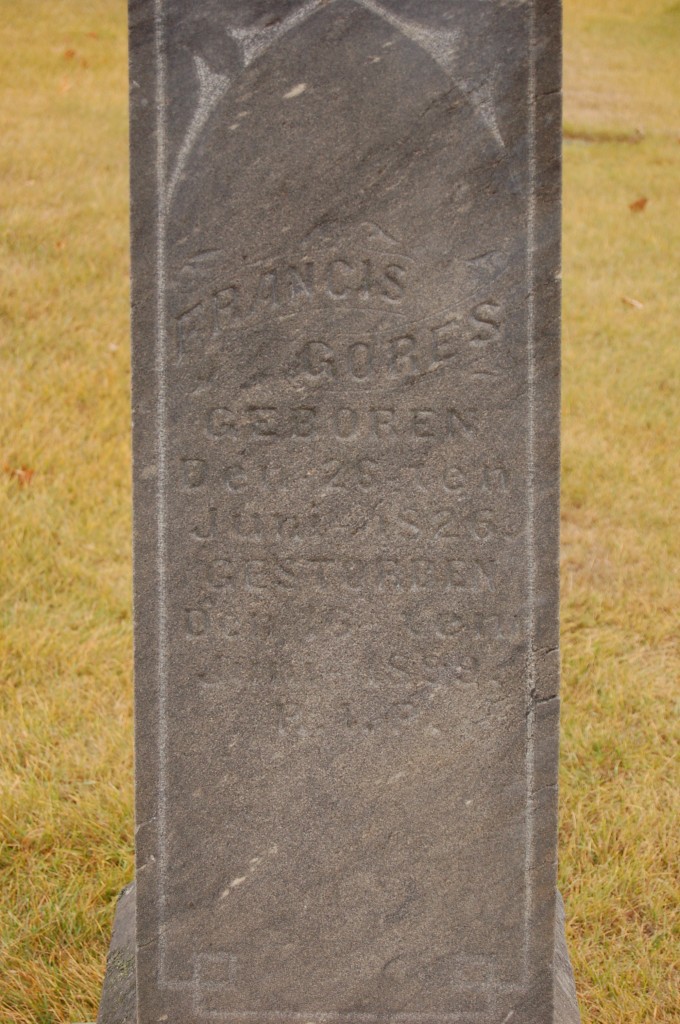 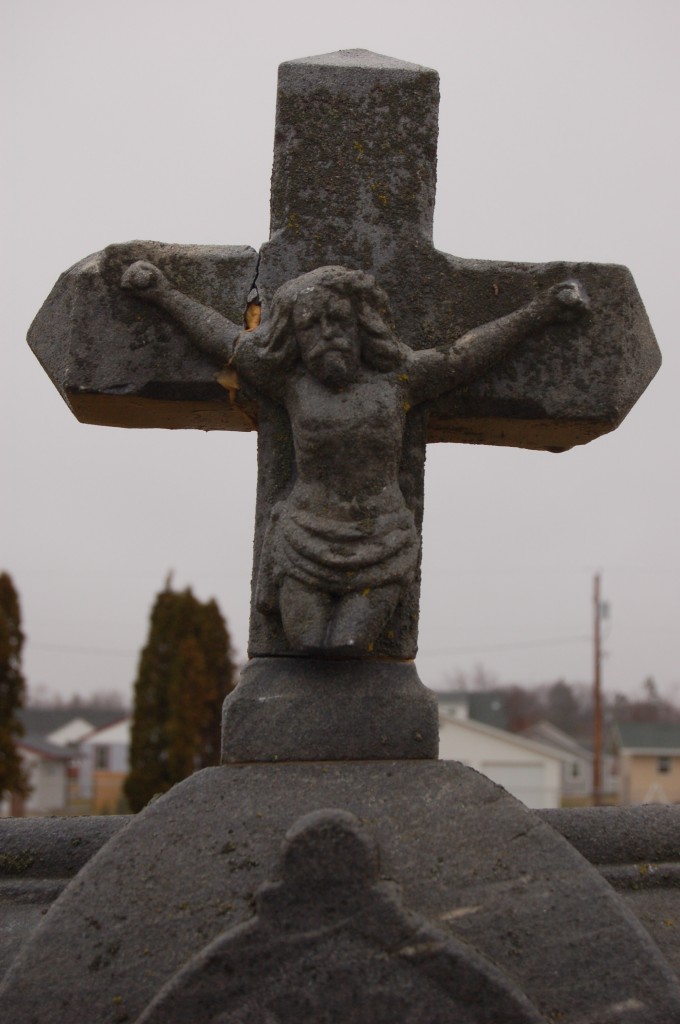