I’ve returned from Minnesota with a pile of scans and documents that’ll take me months to pore through. Before I get started with that, I want to satisfy a request my uncle made a couple of months ago—to learn more about the death of his father’s mother. Dan, this one’s for you.

The drowning death of my great-grandmother, Rosa “Rose” Cecilia (Gores) Prettyman, in 1945 on the St. Croix River is an event that has been shrouded in mystery in my family for decades. In the absence of specifics, stories have arisen. As with other family stories obscured by time and the lack of retelling of first-hand accounts (see these earlier posts), imagined details have evolved to fill the vacuum of understanding. I have heard at least three versions of the story of Rose’s death:

While in Minnesota this past week on my family history research trip, I finally found a few contemporary accounts of Rose’s death that provide a measure of clarity to the the tragic circumstances of that day 67 years ago. What follows are the verbatim transcriptions of the three accounts I’ve found so far.

A holiday boating party on the St. Croix ended tragically and resulted in the drowning of Mrs. C. A. Prettyman, 95 N. Cretin avenue, St. Paul, and Gary R. Lee, operatory of Lee’s Broiler, St. Paul, and White Pine Inn at Bayport, Wis., both former well known and respected residents of Wadena county. Mrs. T. C. Chaney, a member of the party, was the third victim in the drowning while a group of friends were guests of Mr. and Mrs. Lee on their cabin cruiser.

Reports of the shocking accident as carried by the daily papers state that the party was cruising on Mr. Lee’s boat Monday night and as Mrs. Prettyman was on her way to the sun deck of the boat, the handrail broke as she grasped it, causing her to lose her balance and fall from the boat into the swift current of the river. People on board attempted to reach Mrs. Prettyman from the boat, but were balked by choppy water. Mr. Lee jumped into the river to go to her assistance and owing to the rough water he too encountered trouble and was unable to help rescue Mrs. Prettyman. Then Mrs. Chaney, an expert swimmer, leaped into the river to attempt a rescue, despite Lee’s warnings to the others not to attempt to rescue them. Persons remaining on the boat threw a rope to the trio, but in the excitement had not fastened the other end of the rope to the boat. Then an attempt was made to back the cabin cruiser up to the three struggling in the water, but being unfamiliar with the engine, stripped the gears and the boat drifted down stream with the persons on board powerless to aid the victims who sank in some 70 feet of water.

Also on the cabin cruiser at the time were the husbands of Mrs. Chaney and Mrs. Prettyman, Mrs. Lee and Mr. and Mrs. William Sullivan, 89 N. Cretin avenue, St. Paul. The tragedy occurred shortly after the group had begun a cruise Monday evening.

The bodies were recovered Tuesday forenoon after Father Thomas Coleman, pastor of St. Francis of Assissi Church at St. Croix Beach, located them from his plane. They were in nearly 70 feet of water and the St. Croix at that spot is nearly two miles wide, forming what is commonly known as St. Croix Lake, but is a part of the river.

Mrs. C. A. Prettyman, one of the victims, was the former Miss Rose Gores, daughter of the late Judge and Mrs. F. E. Gores, pioneer Wadena residents, and she was born and grew to womanhood in Wadena, living here until the family moved to St. Paul a few years ago to reside. She is survived by her husband, three sons, Bill, Bob, and Dick in the armed service of their country, and one daughter, Joan. Mrs. Prettyman was one of Wadena’s most respected and popular residents as she was a woman of cheerful and friendly disposition and made and held friends by her loyalty to them.

Mr. Lee was equally as well known in Wadena county as he was cashier of the First National Bank of Menahga for a number of years before moving to St. Paul some years ago and took a leading part in the advancement of Menahga and northern Wadena county. Mr. Lee was always ready to render his aid and valuable leadership and the distressing accident which claimed two of Wadena county’s former residents was learned with profound sorrow and expressions of heartfelt regret by their friends.

Funeral services for Mrs. Prettyman will be held at St. Mark’s Catholic church in St. Paul Saturday morning at 9:00 o’clock. Until then the body will be at the Willwerscherd Mortuary at 1167 Grand Avenue. Interment of both Mrs. Prettyman and Mr. Lee will be in St. Paul. 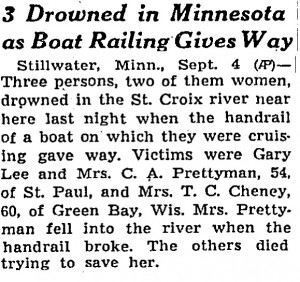 Stillwater, Minn., Sept. 4 (AP)— Three persons, two of them women, drowned in the St. Croix river near here last night when the handrail of a boat on which they were cruising gave way. Victims were Gary Lee and Mrs. C. A. Prettyman, 54, of St. Paul, and Mrs. T. C. Cheney, 60, of Green Bay, Wis. Mrs. Prettyman fell into the river when the handrail broke. The others died trying to save her.

Stillwater, Minn.–(U.P.)—The bodies of three persons were recovered Tuesday from the St. Croix river where they drowned Monday night after one fell from a cabin cruiser and the two others attempted a rescue. One of the victims was of Green Bay, Wis.

The cruiser, caught in the current, drifted away from the three in the water and later was taken in tow by another craft. Among the five left aboard was the husband of Mrs. Chaney.

As might have been predicted, there were grains of truth in all versions of the family stories of the event, but those stories, like the cabin cruiser in the newspapers’ versions of the story, have drifted slowly away from the reality of the tragic events.

4 thoughts on “The drowning death of Rose Prettyman”