In Part 1 of this post, I introduced the story of Sever Severson, the Norwegian immigrant, husband, and father of five daughters, who was drafted for military service in the Civil War and apparently died in the war, never to come home.

In a recent post, I shared news about an exciting development that’s come to light in my research into Sever Severson’s death—knowledge that Sever kept a daily diary from January 1, 1864, until September 26, 1864, just four days before he died, and that at least a copy of that diary has survived.

In this, the second post in this series, I’ll assess what I don’t know in regards to the emerging story of the life and death of Sever Severson, and I’ll formulate questions that I’ll need to answer in order to shed light on these unknowns. I’ll do what I can to answer as many of the questions as possible, and then I’ll chart a course for finding answers to the remaining questions.

END_OF_DOCUMENT_TOKEN_TO_BE_REPLACED

What a week it’s been! After writing the first post of this series on the death of Sever Severson, while planning my next steps for research, I was reviewing my previous research on this subject. As I was looking over some past correspondence, I noticed that I had received a message through Ancestry.com from a woman (I’ll call her A.W.) who appeared to be my third cousin, once removed. My great-great-grandmother, Ellen Caroline “Carrie” (Severson) Bailey and her great-grandmother, Cecilia M. “Celia” (Severson) Leary were sisters, and both were daughters of the man I was researching, Sever Severson.

As those who’ve known me can attest, I’m generally not known as a great correspondent. My genealogical work is an exception, as I try quite hard to keep on top of my communications with family members and genealogists with whom I share common research interests. So it was with no small amount of embarrassment that I discovered that I had let a promising correspondence slip away through neglect.

I’m not sure why I was so busy at that particular time two years ago (although people who know me well will tell you that I’m always busy, all the time—it’s my nature), but my response was a quick note saying I’d write back as soon as I had a moment. By the time whatever it was that I was working on had eased up, I had forgotten about A.W.’s letter.

END_OF_DOCUMENT_TOKEN_TO_BE_REPLACED

I’d like to introduce the tragic story of a Norwegian immigrant, Sever Severson, dying far from home in the service of his adopted country. Despite his death while serving his country, his service to his adopted country was apparently all but unnoticed by the very government he was fighting for. If not for his death, burial, later disinterment and subsequent reburial in a military cemetery, his country and his descendants may not have even known he died, far from home, fighting for the survival of the country that we call home.

I do not know this story first-hand, of course, because Sever is my great-great-great-grandfather, and he died a century and a half ago. Even his daughter, my great-great-grandmother Carrie Severson Bailey, was only 4 years old when he went to war, and whatever memories she may have had of her father did not make it down through the family to me.

In Part 1 of this series, I’ll present what I currently [think I] know about Sever Severson—his life, his family, his military service, and his death. In subsequent posts in this series , I’ll chart a research strategy, undertake the necessary research, present the results of this research, and will hopefully be able to draw some conclusions about the life and death of Sever Severson.

END_OF_DOCUMENT_TOKEN_TO_BE_REPLACED

Sometime in the first ten days of October, 1944, a paragraph was written in The Daily Olympian about the World War II care package activities of my grandmother, Dorothy R. (McMurry) Black. She and my grandfather, Vernon C. Black, were married on December 18th, 1940, in Olympia, Washington, and by September, 1943, Vernon was in the Army, receiving basic training at Camp Abbot, a now-long-abandoned training facility near Bend, Oregon.

The short item was written by Alice Adams Watts and included in her “Here and There” column, a feature of the newspaper’s section, “Department for Women.” It’s just one paragraph, but it imparts a lot of insight into my grandparents’ relationship, my grandfather’s gastronomic preferences, my grandmother’s packing acumen, World War II food rationing, and more.
END_OF_DOCUMENT_TOKEN_TO_BE_REPLACED

For today’s post, I’d like to share an item from a period newspaper that reports on Col. Joseph Askew’s 60th birthday celebration, held at the Menahga town hall. I haven’t had the opportunity to see the original of this article yet, but am instead relying on a transcription made by the late Bob Zosel, a local historian for the Wadena area.
END_OF_DOCUMENT_TOKEN_TO_BE_REPLACED 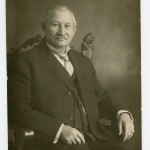 A couple of years before he died, Col. Joseph Askew commented on the town he helped found—Menahga. Joseph built the first frame building in Menahga (which was also the town’s first hotel), and one of the first (if not the first) sawmill in town. He was also the town’s first mayor. In short, Menahga was a town in which he had invested so much of his time, money, and effort as a younger man. Despite his investment in the development of the town, Joseph moved to Wadena shortly after 1900. In the summer of 1908, a couple of years before he died, Joseph was asked to discuss how the village had changed over the years.

I haven’t had the opportunity to see the original of this article yet, but am instead relying on a transcription made by Rebecca Komppa, a local history journalist in the Menahga area.
END_OF_DOCUMENT_TOKEN_TO_BE_REPLACED

Among the items that document our family history is this autograph album that belonged—at least at one time—to Clyde L. Askew (1896–1967). The author(s)/owner(s) of the album are not easy to determine, as entries appear to have been made during at least three different time periods. The first period is probably around the turn of the century, perhaps 1897–1900. At this time, a young child drew in the album.

The second period of the album’s life is comes in 1907, when Clyde gives the book to his aunt Fanny, doing so with an inscription. A possible third period is in 1927, when Ed Young added his name to the album. The fourth period comes decades later (possibly in 1955), after the book had been stored away for some time and then was rediscovered. The (presumed) wife of the finder then writes a letter to Clyde across two of the pages of the book, and another letter across eight additional pages of the book.

In this post, I’ve tried to see what I could learn about the author(s) and the recipient(s) of the notes contained within this wonderful album, but several questions were left unanswered because I don’t have all the facts. I’m hoping that one/some of you will be able to help me with some of these unknowns, so at the end of this post I’ve posed a list of questions that I’m hoping you can help me answer. END_OF_DOCUMENT_TOKEN_TO_BE_REPLACED