Luke Robinson McMurry was a well-travelled and multifaceted person who had his fingers in a great many pies, as I continue to learn. I’ve noted elsewhere his childhood journey overland from Kentucky to Indiana, his migration to Illinois after marrying Elizabeth Miller, his appointment to the Executive Committee of the Agricultural Society of Effingham County, his wholesale millinery and straw goods business in Chicago, his founding of a narrow-gauge railroad in Effingham, Illinois, in 1867, his mysterious departure to Arkansas with his family, and his journey to the Washington territory with his sons several years after his wife died.

END_OF_DOCUMENT_TOKEN_TO_BE_REPLACED

Today’s post highlights a photo that my second cousin once removed Ruth Rogers recently scanned last fall from the collection of family photos she received from her mother Ruth (Manfred and Hope Askew’s daughter).

Col. Joseph Askew was the first distant ancestor I researched as a boy, and I’m always delighted when I find a new photo of him. Until this photo, I knew of only eight different photos of the Colonel (dozens and dozens of prints and illustrations derived from these, but only eight distinct photos). Today’s photo is number nine.

This is definitely the latest photo taken of Joseph and his wife Jane—he’s clearly much aged beyond the photos I have of him from 1909 and 1910.  Since he died on September 21, 1911, I’d estimate that this photo was taken in the year of his death—1911. Given the outdoor setting and the warm weather clothes being worn, especially by the children, I’d guess that this dates to either summer or early fall, 1911. It may well be the last photo taken of Joseph before he died.

END_OF_DOCUMENT_TOKEN_TO_BE_REPLACED 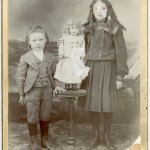 I wrote my first post on this mystery photo two and a half years ago. Thanks to my grandmother’s memories, as well as a great find made by my second cousin once removed Ruth Rogers in a set of family photos now in her possession, I can now declare the case closed on this mystery.

This mystery photo was actually identified last Fall, but the preparations, anticipation and excitement of becoming a new dad led to me setting this blog aside for several months until just a couple of weeks ago.

END_OF_DOCUMENT_TOKEN_TO_BE_REPLACED

In the first post of this series, I presented a mystery—two photos of an older man that had alternately been confidently identified as both Arthur Webster McMurry (1854–1917) and his father Luke Robinson McMurry (1825–1913). At the end of that post, I was still not sure who the man really was, but was leaning towards him being Luke McMurry.

Right after I published the post, a couple of inconsistencies became apparent that now make me fairly certain that the mystery man is indeed Luke R. McMurry.

END_OF_DOCUMENT_TOKEN_TO_BE_REPLACED

Until last week, I thought I knew what my great-great-grandfather Arthur Webster McMurry (1854–1917) looked like throughout his life. But then Katy McMurry showed me a photo that I could have sworn was of Arthur W. McMurry later in his life, relaxing in a rocking chair.

END_OF_DOCUMENT_TOKEN_TO_BE_REPLACED

My grandmother, Dorothy Ruth McMurry, told me that her father, Frank Ross McMurry (1886–1949) was among other things a merchant. His 1912 marriage certificate lists his occupation as merchant, and his obituary in The Olympian from March 13, 1949, also notes that he was a merchant. Until last week, though, that was the extent of my knowledge of his early profession.

Last week, I was contacted by Katy McMurry, the wife of Glenn McMurry (nephew of my grandmother and grandson of Frank Ross McMurry). It turns out that Katy and Glenn have inherited much of the McMurry tangible heritage, and she was more than happy to show me what they’ve got.

Among the photos that she’s got are at least a couple of Frank Ross McMurry’s store, which was apparently in Prince George, British Columbia.