My 3rd-great-grandfather Chester William “Chet” Eddy (1846–1928) was the contemporary of my 3rd-great-grandfather Col. Joseph Askew (1840–1911), and the two men had much in common. Both left the familiar regions of their childhoods and decided to settle in Wadena County, Minnesota, to be able to homestead and own their own land. Both were among the earliest settlers of Menahga, MN (Joseph built the first framed building in Menahga, the Arlington Hotel, and Chet built the first sawmill in Menahga), and they were both industrious, hard-working men who worked a variety of jobs over their lifetimes (Joseph: miner, land-clearer, farmer, sawyer, hotel proprietor; Chet: gardener, farmer, sawyer, carpenter, grocer, bicycle mechanic).

The lives of the two men became intertwined when Joseph’s son Wilfred married Chet’s daughter Hattie around 1894, presumably in Menahga, MN—the village that Joseph and Chet helped found, and where Wilfred and Hattie most likely met.

END_OF_DOCUMENT_TOKEN_TO_BE_REPLACED

The death of my great-great-grandmother Harriet S. “Hattie” (Eddy) Askew, young wife of Wilfred L. Askew, was a bit of a mystery at the time she died, and it’s been a big mystery to me for years, given that the evidence I had (mainly family stories until recently) was scant and often contradictory. I had reported in previous posts (here and here) that Hattie died of pneumonia while on a trip to Cripple Creek, Colorado, and that she was buried in Cripple Creek. I had also heard that she died on a train while travelling between Cripple Creek and Wadena, Minnesota. More recently, I heard another version, that “Hattie’s death was in childbirth, the baby died too. It was in a snowstorm and they could not get the doctor there in time.”
END_OF_DOCUMENT_TOKEN_TO_BE_REPLACED

Updated 2013-08-03: Details of Hattie’s death and burial have been revised. Incorrect details have been left in, but stricken out, and revisions are highlighted in blue. 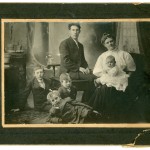 I received this photo from my grandmother, Harriet (Askew) Prettyman a few years back and it’s one of my favorite family photos.

I love the way the edge of the painted backdrop can be clearly seen on the left side of the photo, and that the bottom of the backdrop sits rumpled on the floor, visible in the gap between a child’s arm and his torso. The backless, single-armed chair upon which the father sits contributes only briefly to the verisimilitude of the family sitting casually in their living room. The sad potted plants that appear to have surrendered all dignity complete the scene. All of this stands in stark contrast to the proud, grounded, and solidly built family that is the subject of the photo.

Compositional details aside, this photo is tragic in many ways. It documents a family together for perhaps the last time. It speaks to the effects that death can have on a family. It also serves as an example of how the decisions we make about where to live and where to work can have large and unintended consequences. END_OF_DOCUMENT_TOKEN_TO_BE_REPLACED