Dan and Polly, this one’s for you. For those of you who are regular, long-time readers of my blog, you know I’ve got a sweet spot for Disneyland history. I’ve previously published two posts (this one and this one) on photos I found of my father, uncle, cousin, and grandparents visiting Disneyland on opening day on July 18, 1955. So you can imagine how happy I was when I stumbled upon some new photos of Disneyland in the 1950s.

This time, they’re photos taken (presumably by my mother) in July, 1959, just four years after Disneyland opened its doors to the world.

Unfortunately, my mother took photos as I did in my teens—careful to make sure none of those pesky family members got in frame lest the shot be ruined. Sigh. Teenagers. Amiright? END_OF_DOCUMENT_TOKEN_TO_BE_REPLACED

In an earlier post about my father and his family getting to see Disneyland on the day it opened to the public (July 18, 1955), I shared three photos I had just found that my grandparents took on that landmark visit. These photos may not seem like much (and, granted, they have their fair share of technical shortcomings), but they’re a rare treasure to those interested in the history of Disneyland. In what is certainly the biggest online collection of Disneyland photos (davelandweb.com/disneyland/), the photos I found merited their own special section of the website.

In the nine months since I wrote that post, I’ve kept my eyes open for more photos from that historic day. I felt confident that they didn’t go to the opening day of Disneyland and just take three photos. Last week, while visiting with my father in Washington state, he gave me several small stashes of black-and-white negatives. When I looked through them, I found the negative to one of the prints I had already seen. It was mixed in with photos of a circa 1953 trip to Kansas to visit relatives. The more I looked through the negatives, the more I realized that at some point, they had all been mixed up and then later incorrectly grouped with other negatives.

END_OF_DOCUMENT_TOKEN_TO_BE_REPLACED 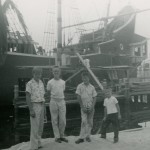 While looking through a set of photos from the 1950s that once belonged to my grandmother, Dorothy (McMurry) Black, I found a fun surprise—three photos of my father and his family visiting Disneyland just one day after its grand opening day. Disneyland had its grand opening on July 17, 1955, but only press and invited guests were allowed in the park on that day. The next day—July 18, 1955, was the first day that the public was allowed into Disneyland, and these three photos were taken on that day.

My grandparents, Vernon and Dorothy (McMurry) Black took four very lucky children to Disneyland that day: their two children (Keith and Gary), their foster son (Richard Bearden), and their nephew (Jude Laspa). Richard, the oldest, was 14 years old. Keith was 12, Jude was 11, and Gary was 6. Vernon and Dorothy were both 38, but children for the day, I’m sure!