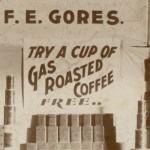 My great-great-grandfather, Judge F. E. Gores (1866-1936), had a considerable reputation. A real estate company in Wadena, MN, that he founded is still named The Gores Company, precisely because of his reputation. A considerable portion of his good reputation was earned in the Great Depression, when the stock market crashed and panic caused citizens to run to their banks to try to withdraw their money. At many other financial institutions, people found their savings and investments were gone. Every last person who came to the F. E. Gores Mortgage Company asking for their money, however, had their money fully returned to them.

In addition to being in the Mortgage business, he was a real estate investor, the Mayor of Wadena, a prohibition judge and a probate judge. But before the successes of his later life, Fredrick Eugene (“F. E.”) Gores, the son of central European immigrants, had a very different career path. He was a grocer and a merchant. He ran a business called City Grocery, and he apparently specialized in teas and coffees.
END_OF_DOCUMENT_TOKEN_TO_BE_REPLACED 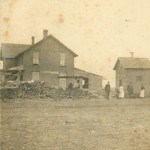 In my original post on this topic, I used the legal document recording Joseph Askew’s homestead and combined that with aerial imagery to locate the exact location and extent of the Askew homestead from 1875 until the 1890s. In some of the recent images, at least five buildings and a grain silo could still be seen standing, giving me hope that I might be able to glean at least a little insight into what the original buildings may have looked like.

In what appeared to be the most recent aerial photo, however, all of the buildings except the silo appeared to have been destroyed. I decided that on my recent family history trip to Wadena, I would have to go check the homestead myself to see if the buildings really had been destroyed, and to see if I could still learn anything about the layout of the original homestead.

I’ve now returned from my Wadena-area family history research trip and I’d like to share with you what I learned about the Askew homestead.

END_OF_DOCUMENT_TOKEN_TO_BE_REPLACED

This is the second of two Thanksgiving-themed posts for today. I’ve transcribed an article from the 1938 Wadena Pioneer Journal that documents interactions between Col. Joseph Askew’s children and the local Native Americans who passed by his homestead while Isabelle (born 1868) and Wilfred (born 1873) were still in their school years (approximately 1875–1886).

Native Americans in that area travelled on the Otter Tail trail—part of the Red River trail system of old ox cart trails and trading routes winding from Winnipeg, Canada, to the Mississippi river at St. Paul, MN—which passed through the old Joseph Askew homestead, just yards from the front door of their house. Joseph Askew’s daughter Isabelle “Belle” Askew (later Belle Spencer) told about her encounters with Native Americans in the article (the Askew-related portions are in blue).

END_OF_DOCUMENT_TOKEN_TO_BE_REPLACED 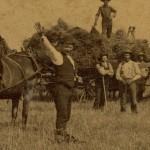 Happy Thanksgiving, everyone! Today’s post is the first of two Thanksgiving-themed posts. This first post is a harvest-related post, in which my great-great-great-grandfather, Col. Joseph Askew, is seen running a wheat-threshing operation in Minnesota in the late 1800s.

Before I go any further, I’d like to acknowledge the Wadena County Historical Society and their Executive Director and Curator, Rose Bakke. The photo that is the focus of today’s post is one from their Genealogical Research Center collections, and I would not have been able to find it or take a scan of it without the kind and generous help of Ms. Bakke. I spent a full day in their collections, making wonderful discoveries every few minutes, and I left wishing that I had an extra few days to learn even more from their impressive collections. The Wadena County Historical Society’s Museum is an inspirational place, and I’d like to sincerely thank Rose and everyone who’s had a hand in building, curating, indexing, and databasing their collections for keeping Wadena County history alive.

END_OF_DOCUMENT_TOKEN_TO_BE_REPLACED

I’ve returned from Minnesota with a pile of scans and documents that’ll take me months to pore through. Before I get started with that, I want to satisfy a request my uncle made a couple of months ago—to learn more about the death of his father’s mother. Dan, this one’s for you.

The drowning death of my great-grandmother, Rosa “Rose” Cecilia (Gores) Prettyman, in 1945 on the St. Croix River is an event that has been shrouded in mystery in my family for decades. In the absence of specifics, stories have arisen. As with other family stories obscured by time and the lack of retelling of first-hand accounts (see these earlier posts), imagined details have evolved to fill the vacuum of understanding. I have heard at least three versions of the story of Rose’s death: END_OF_DOCUMENT_TOKEN_TO_BE_REPLACED

I’ve planned, I’ve prepared, I’ve packed, and in just an hour, my wife and I will board our redeye flight from SFO to Minneapolis/Saint Paul. It’s the first trip to Minnesota for either of us, and for me it’s a realization of a decades-long desire to visit the ancestral stomping grounds of my maternal line.

I’ve prepared for a week of interviews, family history research, exploration, discovery and documenting all of the above. I’ve packed a digital camera, a digital video camera, a mini tripod, a voice-recording pen, a flat-bed scanner, a laptop computer, a mobile hotspot, white cotton gloves, and archival polyester sleeves. Now if I only had a crew to operate all of this while I conduct my interviews!

Just a quick post to share a photo I recently found among old family photos. In this photo, Clyde Lawson Askew, my great-grandfather, is seen standing in front of a Caterpillar road grader that he apparently parked in front of his house. Among his many other jobs (drayer, teamster, laborer, machinist, fireman, railroad brakeman, railroad bouncer, oil station manager), Clyde was also a road builder. Among other projects, he worked on the Washburn project in McLean County, North Dakota, and in Wadena, he had the title of “Maintainer of City Streets.”
END_OF_DOCUMENT_TOKEN_TO_BE_REPLACED 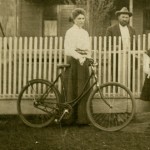 As I’m gearing up for my big Wadena, MN, family history trip next week, I’ll be scaling back on my blog posts. I won’t be writing posts of any substantial length until after I return home in a little over two weeks, but I’ll do what I can to post updates from the road.

Speaking of road, today’s post is a thematic one. As I’ve been scanning my family history photo collection, I’ve come across a number of photos of people with their bicycles. I’d like to share them with you. I’ll present them in chronological order, from oldest to most recent.
END_OF_DOCUMENT_TOKEN_TO_BE_REPLACED